The Chic legend wowed the (Late) Breakfast Meeting with tales of his work with the likes of David Bowie, Prince and Diana Ross 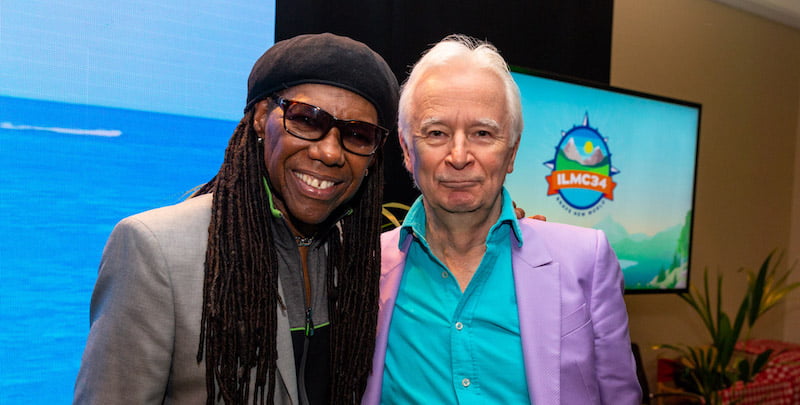 Nile Rodgers brought the house down at ILMC 34, regaling the (Late) Breakfast Meeting with tales of his work with legends such as David Bowie, Prince and Diana Ross.

The Chic co-founder even squeezed in a shout out to his promoter, Live Nation’s Phil Bowdery, during yesterday’s 90-minute chat with former Dire Straits manager and raconteur Ed Bicknell.

The multi-award winning, genre-defying musician, whose career stretches over five decades, has written, produced and performed on albums that have sold over 500 million units worldwide, and 75 million singles. In 2018, he co-founded Hipgnosis Songs with manager Merck Mercuriadis.

“No one in the club was talking to him, because he didn’t look like David Bowie”

“David had just been dropped from his record label. I was about to get dropped from mine. The day that we met, we met early in the morning. I thought that I had driven up to this brand new after hours club in New York, called The Continental, with Billy Idol. But, in fact, what happened is I had driven there with someone else, but Billy was right there at the front door. Billy and I loved each other, we partied all the time. We walk in the club and Billy goes, ‘Bloody hell, that’s David fucking Bowie!’ And as he says ‘Bowie’, he barfs, because he had been putting down the sauce all night.”

“At that point, I had seen David. It was so strange because no one in the club was talking to him, because he didn’t look like David Bowie. It was the beginning of the metrosexual look, and he was dressed in a suit while everybody else was all club kitted out. He was the only one that looked like he ran Exxon or something. It was so weird, he was completely by himself. We start talking, and right away, it flipped from us talking about pop music to jazz. I now find out that David Bowie is a complete jazz freak, as a matter of fact, an aficionado. So now we’re trying to out-jazz each other. We’re going for the most underground avant-garde shit ever, it’s like we were playing poker. We’re just going on and on and on and on and on. And it was like no one else in the world existed. We found our thing, and we talked for hours and hours. At some point, he must have asked me for my phone number. A couple of weeks had gone by and my house was being rebuilt, and one of the workers said to me, ‘Hey, Mr Rodgers, some fucking guy keeps calling up every day saying he’s David Bowie.’ I said, ‘Well what did you do?’ He said, ‘I hung up on the cocksucker!’ I said, ‘The next time that cocksucker calls, could you give me the phone? That is David Bowie!’ Anyway, I finally take the call. He and I laugh and we joke. And it was magic, it was so magical because he got dropped. I was getting dropped. By the time we decide that decide we’re going to make this record [Let’s Dance] together, it was just the two of us against the world.”

“There’s no Prince. We finish the song and I see him running away”

“The first time I played with him was here in London, at some little joint in Camden. I walk in and all I hear is Prince go something like, ‘Oh my God, Nile Rodgers.’ He was playing guitar, he and [Ronnie] Wood. I walk up on stage, he gives me the guitar and he sits down on the keyboards and starts calling out R&B tunes. Poor Woody, who is a sweetheart, didn’t know any of these songs. So Prince and I are all into it, but Woody’s looking for the key and looking for the groove. We finished the first song and I said, ‘I think you should sit down now,’ and it was all cool. It was all love, because we were having the time of our lives. So Ron sits down and then Prince and I… I don’t even know how long we played. The next day I bought every rose in London, and [Prince] told me that when he got back to his room, it was filled with thousands of purple roses. I guess I went overboard, I was so happy with that jam.”

“Years later, we’re playing down in Turks and Caicos where I have a home. Prince has one there too because when he found out that I was building a recording studio, he said, ‘Really? Okay, I’m going to move to Turks and Caicos!’ I never built the recording studio, I’ve got a little writers’ room, but Prince moves down there. We’re doing a concert and Prince happens to be on the island. He comes over and he says, ‘Yo, can I play Let’s Dance with you guys?’ ‘Hell, yes, of course, bro!’ We get to the middle of the show where we do Let’s Dance and I say, ‘Ladies and gentlemen, a really great friend of mine and a really great artist – Prince!’ And we go into the song, but there’s no Prince. We finish the song and I see him running away. I’m like, ‘What the hell?’ A year later, we were playing in New Orleans at the Essence Festival to 70,000 people. He says to me, ‘Hey Nile, can I come out and play Let’s Dance with you?’ ‘Of course Prince, but I’m not falling for it this time.’ So we set up his gear, we play Let’s Dance and we get to the part where we have the whole audience jumping up and down. In the middle of the jump sequence, we heard this roar. And I look to my left, and there’s Prince with one hand in the air jumping up and down with his guitar strapped on. He’s soloing his ass off and he’s killing it. We’re jamming together and it was amazing, it was like my heart was flying. I happened to post a picture of Prince jumping up and down with me and I’m waiting for how long it’s going to take for him to pull it down. [But] Prince reposts the picture. And this is exactly what it says. No words. And I feel like a gazillion dollars. I never had another encounter with him. I never called him and thanked him. I never did anything because he wound up passing away fairly soon after that event. But it was amazing. When you’re a live musician, everything is about playing, giving back and sharing. That’s the shit I live for.”

“Every song I’ve ever written is based on a non-fiction event, and then we use fictional elements to help complete the story. One night, I’m club hopping and I go to this transvestite club because they have the best music, they don’t have to worry about the Top 40 records, they can play all the records that they think that the crowd is going to be down with. I go to the bathroom. I’m standing there at this trough and on either side of me are at least five Diane Ross impersonators, and a light bulb goes off in my head – I’ve got to write a song about the queer community’s love of Diana Ross. So I call [Chic co-founder Bernard Edwards] and I say, ‘Bro, write down, “I’m coming out,” because I’m gonna stay up, I’m gonna get drunk and I’m gonna forget this. Imagine that she walks out on stage and the first words out of her mouth are, “I’m coming out.” We’re gonna sell a million records just to the queer community alone!’ The next day, he comes in the studio and we put together I’m Coming Out. Today, to you guys that probably just sounds like a pop record. But when we wrote that, [Motown founder] Berry Gordy was furious. He was like, ‘Whoa, this is not a Diana Ross record.’ After months of lawsuits and this and that, they decided to put it out. The biggest record of Diana Ross’s life is the album Diana. We had to fight, fight, fight, fight, every step of the way, to give her the biggest album of her life, and I’m so proud that we had that fight. I’m Coming Out has historically meant something to the LGBTQ+ community, which is exactly how I got the idea that first place.”

“He works his butt off. He’s the sweetest, sweetest guy, and we work in a business where I’m fortunate to have worked with some wonderful, charming people. I’d like to say a few things about him because he’s just so awesome. He’s been a part of my life for a number of years now. He’s celebrating his 50th year in the business, which is amazing to me. And I just want to give thanks to him for being one of the loveliest guys I know. Happy 50th Phil, I love you. David [Bowie] always called me ‘Darling’? Well, Phil always calls you ‘love’. I just want to say, ‘Thank you, love,’ to Phil Bowdery.”