In the Open Forum session, remote guest speakers from Ukraine updated delegates about the current situation in their homeland. 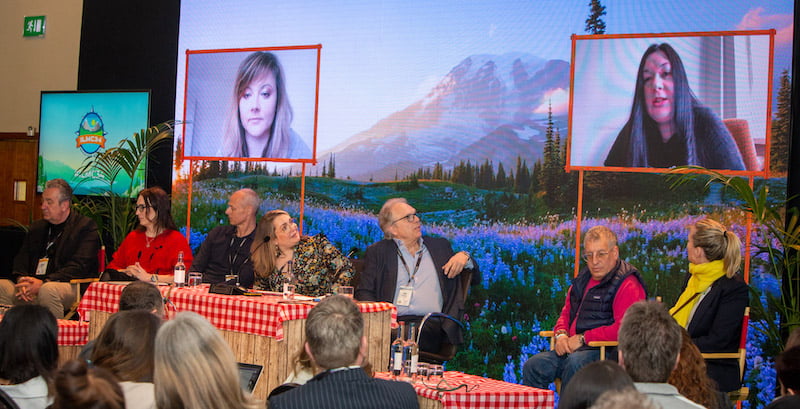 Co-chaired by Live Nation’s Phil Bowdery and CAA’s Maria May, the Open Forum session featured remote guest speakers Alona Dmukhovsla and Sasha Yerchenko from Ukraine, who updated delegates about the current situation in their homeland.

Yerchenko from SEA talked about the “terrible and awful war” they are experiencing. “It feels like we live in two different worlds now,” she said. Explaining that she and her 15-year-old daughter stayed in Kyiv, she said every citizen was now volunteering for various causes to support the war effort. “My daily routine is not just about concerts, it is about delivering humanitarian aid to older people and people in need,” she told delegates.

“If Ukraine fails, the whole of Europe will fail”

Dmukhovsla, of Music Export Ukraine, said every single Ukrainian believes they are responsible for the country’s mutual victory. On the music side, she said she is coordinating efforts to have Ukrainian bands play at festivals around Europe. And she highlighted the partnership with ARTmania in Romania and Pohoda Festival in Slovakia to find work for some of the live music industry professionals who are desperate to find employment. “If Ukraine fails, the whole of Europe will fail,” she warned.

Codruta Vulcu from ARTmania urged ILMC attendees to participate in the ARTery.community not-for-profit programme that centralises jobs at events for Ukrainian professionals “so that they can be treated with dignity rather than end up in European capital cities doing menial jobs for unskilled workers.”

Looking back over the past two years, Rauha Kyyrö (Fullsteam Agency) talked of the frustration in getting government assistance in Finland and the fact that freelancers and musicians in particular suffered when they could not work because of pandemic restrictions. However, she noted her company had survived and had organised some highly successful livestream events that captured the imagination of Finnish fans.

Marty Diamond (Wasserman) noted that some streaming platforms that emerged through the pandemic were interesting because they were interactive, and some clients had embraced the technology. But he said persuading other clients to use livestreaming was not something he would do.

However, May noted that the opportunities for additional income and for allowing access to disabled people or fans who cannot make gigs means that livestreaming is here to stay. And she also lauded the opportunities that the metaverse might offer to concerts and live events for people who prefer to remain on their sofa.

Detlef Kornett (DEAG) said that convincing baby boomers to return to live events would be a trickier task, so bands that attract fans of a certain age group could struggle in the months ahead.

Talking about the return to touring, Diamond revealed that on the recent Louis Tomlinson tour the audience was noticeably younger and there was a degree of education needed to remind people how to attend shows, while on the latest Snow Patrol tour there was a degree of slippage in terms of fans who didn’t show up for whatever reason. And he noted that he is seeing ticket price rises in America, while many events are still priced at pre-Covid rates.

No-show rates had reduced from 40% last year in the UK, but spiked again during Omicron

Alex Hill (AEG Europe) said no-show rates had reduced from 40% last year in the UK, but spiked again during Omicron, however confidence among fans seems to be slowly returning. Diamond said this mirrored what is happening in America, where he also said merch rates have rocketed with fans eager to get their hands on t-shirts and the likes.

Having asked their guests about the Covid experiences and the challenges and opportunities that brought with it, the co-chairs moved the conversation on to the very real problems of the supply chain where both staff and equipment are in short supply.

May noted that some of the festivals that she is working with have dropped performance areas because they cannot physically find the stages for their events.

Meanwhile, Amy Thomson (Hipgnosis Songs Fund) explained that she had actually closed down her artist management operation just prior to Covid and while in isolation went down a rabbit hole where she looked at exactly where the money goes from performance rights around the world. And she criticised PRS in particular for increasing rates for struggling artists who turned to livestreaming to earn some money. As a result, she revealed details of a campaign to make performance rights more transparent and push for itemised statements that show exactly what the breakdown of payments are to rights holders.

Voicing their support for the people of Ukraine, the panellists concluded by talking about the year ahead and the hard work that will be needed to negotiate the hyper inflationary conditions that face everyone. Kornett predicted that at next year’s ILMC we will be talking about all the problems we had to deal with in fall and winter 2022 and the fact that ticket prices will only be going in one direction.