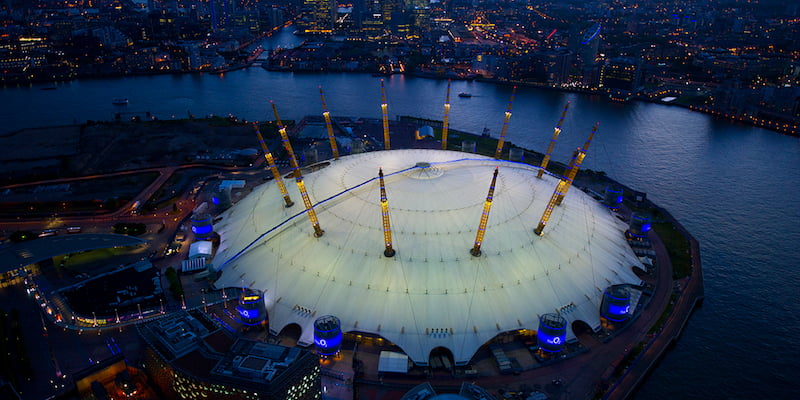 The roof of The O2 in London has been severely damaged by the worst storm to hit the UK in three decades.

Storm Eunice has ripped a hole in the exterior panels of the AEG-operated building, which opened as the Millennium Dome in 1999 and was reborn as a multi-purpose arena in 2007.

A red weather warning – meaning a risk to life – is currently in place for London and other parts of the UK. Wind gusts in the most exposed coastal areas could be in excess of 90mph, according to the Met Office.

“Due to today’s adverse weather conditions, we can confirm that there has been some damage caused to the tent fabric in our roof at The O2,” says a statement from the venue. “The affected areas have been cleared and The O2 will remain closed for the rest of the day. The safety of our visitors remains of paramount importance, and we will continue to assess the ongoing situation and act accordingly.”

An estimated 1,000 people were evacuated from the Greenwich complex, which also houses a shopping centre, a cinema and the 2,800-cap Indigo at The O2, but no injuries were reported. Images and footage posted on social media highlight the extent of the damage.

“Firefighters cordoned off the area to ensure no one was injured by any further falling debris,” says station commander Chris Kamara. “There has been no actual collapse or structural damage to the building, but due to the nature of the canvas material which covers The O2, it has come loose in high winds and looks quite dramatic.

“Crews have made the scene safe and The O2 is now closed until further notice.”

There is no word as of yet on whether any shows will be affected by the situation. Dave is the next artist due to start a two-night stand at the 20,000-cap arena next week (21-22 February). Other upcoming events over the next few weeks include UB40 featuring Ali Campbell (25 February), Simply Red (2-3 March), The Lumineers (4 March), Davido (5 March) and the Country to Country festival (11-13 March). A Fugees gig, originally planned for tonight, was cancelled last month due to Covid concerns.

Red weather warnings are rarely issued by the Met Office. The most recent warning coincided with Storm Arwen in November 2021, with the last one before that for wind coming in March 2018.

“The red warning areas indicate a significant danger to life as extremely strong winds provide the potential for damage to structures and flying debris,” says Met Office chief meteorologist Paul Gundersen. “Although the most exposed coastal areas could see gusts in excess of 90mph, winds will remain notably strong further inland, with gusts of between 60-70mph for most within the amber warning area, and up to 80mph in a few places.”