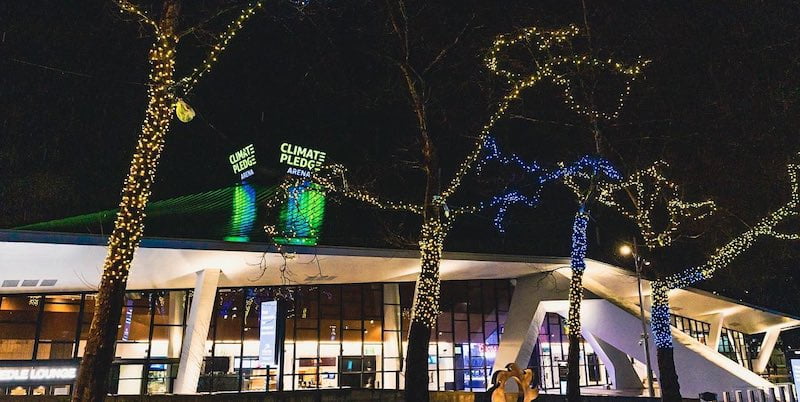 Global sports and entertainment giant Oak View Group (OVG) has announced it is boycotting Russia amid widespread outrage over the country’s invasion of Ukraine.

The UN estimates that more than 500,000 refugees have fled from Ukraine into neighbouring countries. Over 100 people, including children, are said to have been killed as heavy fighting continues in major cities.

OVG’s Climate Pledge Arena lit up Seattle Center in the colours of the Ukrainian flag in a gesture of support for #StandWithUkraine.

“In light of the tragic conflict rapidly unfolding in Ukraine, Oak View Group has pledged to not do business in or with Russia, nor will we serve Russian brands in any of our venues on a global basis, effective immediately,” says a company statement. “We stand with the people of Ukraine, we condemn the actions of Russia, and we hope our stance inspires others in our industry to take action where they can.”

A number of European live music trade bodies have also spoken out in condemnation of Russia’s actions.

Germany’s Event Management Forum, which consists of five major organisations including live music associations BDKV and LiveKomm, denounced the “illegal and barbaric attacks on Ukraine by Vladimir Putin and his regime, which violates international law”.

“We are shocked by this military invasion and will do everything we can to show our solidarity with the Ukrainian people and to support them in their fight against this injustice,” says BDKV Pascal Funke.

The body is currently working on organising a benefit concert for Ukraine, the proceeds of which will be donated to the International Aid Fund for Culture and Education.

“By performing this task, we hope to be able to make a small contribution to the return of peace and freedom to the people of both Ukraine and Russia,” says Jens Michow, executive president of the BDKV.

“Sadly, in 2022, we still need to deal with tyranny, oppression and other types of aggression to democracy and freedom”

Pan-European festival association Yourope has expressed solidarity “with those who suffer from and disagree with this terrible aggression”.

“We have always strived to achieve the best together because we are convinced that only cooperation and exchange makes us stronger,” it says. “A healthy and vivid society depends on awareness and tolerance for all cultures, genders, races, religions, sexual orientations, colours and origins. We all should be the ambassadors of hope, respect and peaceful dialogue every day to make the world a better place for every single individual and for all of us.”

Why Portugal added: “There’s no room for aggression in every corner of the world. Sadly, in 2022, we still need to deal with tyranny, oppression and other types of aggression to democracy and freedom. In a world where borders should be diminished, it makes no sense to observe such an attack that Russia is undertaking towards Ukraine.

“We, within this community, must be focused on progression towards a much brighter future – not only in the creative and music industries but the entire ecosystem that surrounds us. We fully condemn these actions. In any circumstance, especially as we’re yet recovering from the economical effects of Covid-19, we can’t accept what’s happening.

“The Portuguese Music Export Office (Why Portugal) demonstrate full solidarity and support to our fellow colleagues from Ukraine: musicians, labels, the Music Export Ukraine, and the overall music industry in the country. Actions should be louder than a thousand words, so that’s why we’re completely open to supporting all Ukrainian musicians based in Portugal at the moment.”