The WME-repped star won Album and Song of the Year as well as the inaugural Artist of the Year honour at the ceremony, held at London's The O2 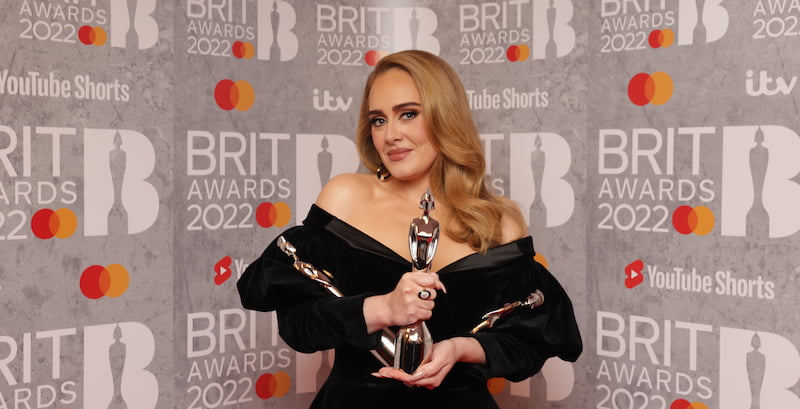 It was a good night for WME clients at the BRIT Awards, with triumphs for Dua Lipa, Olivia Rodrigo, Bruno Mars and Dave, and a hat-trick of honours for Adele.

Adele, who is repped by Lucy Dickins and Kirk Sommer on the touring circuit, took Song of the Year and Album of the Year for Easy On Me and 30, respectively, and was also crowned the inaugural Artist of the Year at last night’s (8 February) ceremony at The O2 in London. The gender-neutral award was introduced following the decision to scrap the male and female categories.

“I understand why the name of this award has changed but I really love being a woman and being a female artist,” said the singer. “I’m really proud of us.”

Elsewhere, Dua Lipa picked up the prize for Best Pop/R&B – one of four new genre awards – Dave took the Hip-Hop/Grime/Rap gong and Olivia Rodrigo’s Good 4 U was named International Song of the Year, while Mars claimed Best International Group with Anderson .Paak for their superduo, Silk Sonic.

Other victors included Ed Sheeran (Songwriter of the Year), who is represented by One Fiinix Live, Paradigm’s Billie Eilish (International Artist) and CAA’s Sam Fender (Alternative/Rock) and Becky Hill (Dance).

With US star Doja Cat withdrawing from the event a week before it took place due to Covid cases within her crew, the line-up for the UK music industry’s biggest night was comprised entirely of domestic acts. Kicking off with a surprise collaboration between Ed Sheeran and Bring Me The Horizon, performers also included Adele, Anne-Marie/KSI/Digital Farm Animals, Dave, Rising Star winner Holly Humberstone, Liam Gallagher, Little Simz and Sam Fender.

Song of the Year – Adele, Easy On Me

International Song of the Year – Olivia Rodrigo, Good 4 U

Artist of the Year – Adele

Songwriter of the Year – Ed Sheeran

Mastercard Album of the Year – Adele, 30

Producer of the Year – Inflo