Driift on The Smile’s game-changing livestream 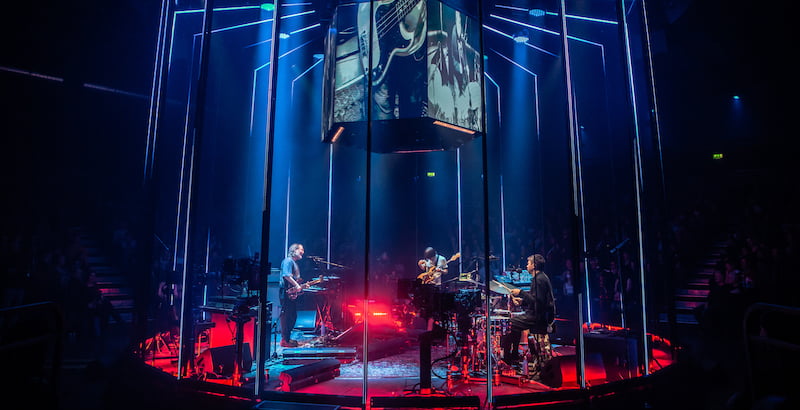 The Smile at Magazine, London

Performed in the round, each performance was held in front of a seated audience of 1,200 and livestreamed in real time via Dreamstage for a different timezone – 8pm UK time on Saturday for EMEA and Sunday at 1am for the Americas, with the band returning 10 hours later at 11am for APAC.

“I couldn’t have been happier,” Salmon tells IQ. “It’s been amazing watching the reactions to it and I have to admit I’ve been bombarded by a bunch of managers saying, ‘Let’s talk.’ So it’s interesting how it’s sparked the imagination.”

Advanced livestream tickets were priced £12.50 (€14.75), or £14.50 (€17.25) on the day of the show, while in-person tickets cost £79. The last few ticket sales are still being totted up as the event, which was filmed with nine cameras, is still available on demand, but Salmon puts the number of paid streams in the “tens of thousands”.

“There’s a two-day VOD window that finishes tomorrow, but suffice to say we’ve sold more tickets than we set out to sell,” he adds. “We had a target number that we set ourselves based on our hopes and expectations, given the fact that this is a new band. Yes, of course, there’s a couple of famous people in the band, but it is a new band and it’s music that hasn’t yet been released. So it was a realistic level that we thought we would hope to sell. We have probably oversold that by 20-30%, so I’m really chuffed with that.”

It also partnered with the UK’s Glastonbury Festival on the Live At Worthy Farm event, which also featured The Smile, as well as artists including Coldplay, Haim, Jorja Smith, Idles, Wolf Alice, Michael Kiwanuka and Damon Albarn.

“We’ve been considering how we could evolve what we’re doing for the last year or so, and we were always cognisant of the fact that we had to keep pushing ourselves creatively to reimagine what these types of events could be,” reveals Salmon.

“This concept of a ‘hybrid’ event – where you have a traditional tour show, put some cameras in the venue and then hope to sell some livestream tickets on top of the physical tickets – that just doesn’t interest us at all.  It feels a bit of an afterthought and frankly, I just don’t think the experience would be very good for viewers at home. It would be no better than watching an old DVD or something you can get on YouTube for free. It doesn’t feel artistic, it just feels like a way of making more money perhaps, and that’s not really what drives us.

“Ultimately, we wanted to focus on all of the things that we’ve learned over the last 18 months of doing livestreams without an audience, because we’ve been super-proud of some of the shows we’ve done. The artists were filmed in such close proximity, so when you’re watching at home, it feels really special. So how do you continue to take that and achieve that when there’s an audience in the room? It sounds like a simple question, but it’s a fiendishly difficult thing to pull off.”

He continues: “Our singular challenge was to ensure that anyone who saw the show was blown away by it and enjoyed it equally, whether they were in the room or at home, and I think we got close to achieving that. I don’t think that’s ever been done before. And that’s really exciting because, as an industry, it gives us a new format that we can make use of.

“What I hope Driift is becoming is the first – and at the moment only – specialist producer and promoter of live events for the digital era. If you think about it – and this isn’t a criticism – the live music industry is ultimately almost entirely non-digital. There’s hardly anything about the live music industry that is focused for the digital world. And there are very few industries you could say that about in this day and age.

“Almost every industry has found a digital strand to it or developed a digital dimension to it, and bizarrely, the live music industry doesn’t seem to have really focused on that. So it’s cool that we’ve stumbled across this through the lockdown and through the pandemic – there’s no way we would have come up with it if we hadn’t have been forced into the situation we have. But I suppose through those great challenges comes innovation; when you’re forced to innovate, you innovate.”