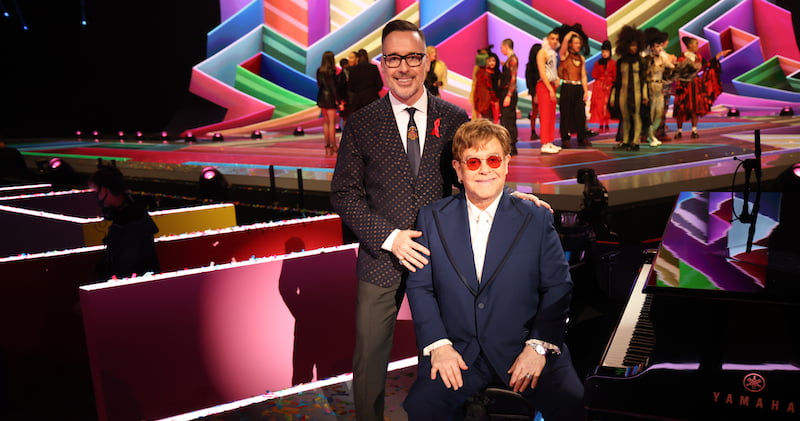 Elton John and David Furnish were honoured at the 2021 Artist & Manager Awards (AMAs), which attracted more than 700 artists, managers and music industry professionals to Bloomsbury Big Top in London.

The duo made a final-hour appearance to collect the Artist & Manager Partnership Award at last night’s ceremony, which was organised by the Featured Artists Coalition (FAC) and the Music Managers Forum (MMF).

Rina Sawayama, who was also named 2021’s Breakthrough Artist, presented Elton and David with the accolade at the first in-person AMAs since 2019. Other artists recognised on the night included Little Simz (Artist of the Year), Mogwai (Pioneer) and Bicep, who shared their award for Innovation with their management team at This Is Music.

“Coming together again with friends and colleagues feels such a hugely positive and symbolic step forward,” said MMF CEO Annabella Coldrick and Featured Artists Coalition CEO David Martin. “Tonight’s Awards was about celebrating music, talent, innovation and camaraderie across the artist and management community – whether that’s individuals at the start of their careers, survivors and legends, or those still standing after decades.”

September Management’s Amy Morgan was crowned Manager of the Year for her work with Glass Animals and Metallic Inc’s Grace Ladoja MBE received the Entrepreneur Award in recognition of her bridge-building between music scenes in the UK and Nigeria. In addition, Kayleigh Thorpe of Little Runaway Management was revealed as the 2021 Breakthrough Manager for her work with Gerry Cinnamon.

The Black Music Coalition were named Industry Champions, while Karma Artists picked up the award for Writer/Producer Manager, and YMU Music Group were presented with the Team Achievement Award in recognition of their groundbreaking inclusion initiatives, including a Mental Health and Well-Being programme for clients and staff.