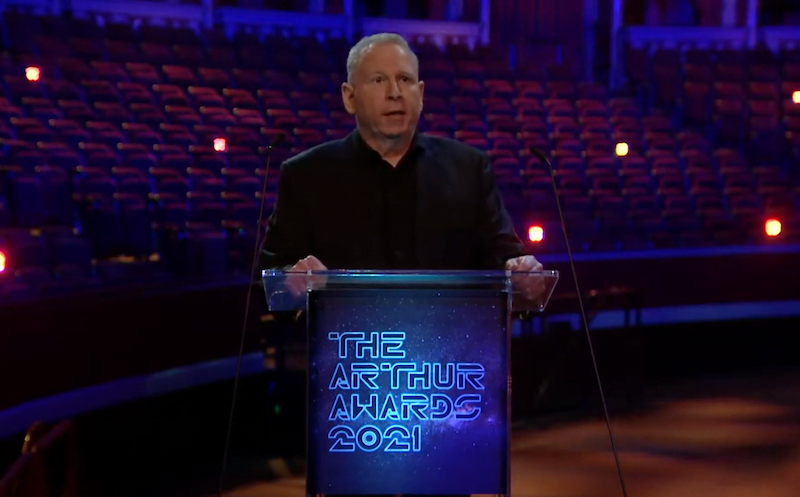 Steve Strange at The Arthur Awards in March

Renowned booking agent and X-ray co-founder Steve Strange has passed away after a short illness.

A statement issued last night from X-ray reads: “We have lost a legendary figure in our personal and professional lives that we will all deeply miss.

“Steve was a unique individual within our industry, his overwhelming love of music lead to a 30 year plus career guiding the touring of an eclectic mix of artists from all genres of music that he adored.  A universally known, hugely respected and loved character – if you hadn’t already seen him at a gig or festival, you’d most certainly hear his infectious and infamous laugh.

“Steve had the best ears in the agency business, signing and developing the careers of countless world class Artists from small club venues to vast international multi-stadium tours.

“He will always be remembered with love by his friends & colleagues at X-ray and the world over.”

“The life and soul of every occasion, a music man to the core and dedicated to his clients, friends and family.”

Tributes to the agent began flooding social media from Friday night (24 Sept.). Amongst those, was CAA’s Emma Banks, who wrote that Strange was “a truly good and loving person without a bad bone in his body. The life and soul of every occasion, a music man to the core and dedicated to his clients, friends and family. If you knew him you will understand why everyone is devastated by his passing and if you didn’t know him you missed out big time.”

Siren Artist Management’s Adam Parsons says: “His talent and expertise coupled with his never ending enthusiasm has made him one of the World’s leading music executives and one of the most loved beings I have ever known.”

Paradigm’s Rob Challice wrote, “His enthusiasm for music and life was contagious and inspirational. He changed the world around him. I can’t believe we’ll never hear that big laugh of his again.”

“His enthusiasm for music and life was contagious and inspirational. He changed the world around him.”

Born in Lisburn near Belfast on 17 April 1968, Strange was raised in Carrickfergus in nearby County Antrim during the troubles in Northern Ireland. At the age of 11, after his cousin took him to see UFO at Ulster Hall in Belfast, Strange’s love of hard rock was born, which saw him devote his youth to the likes of Rush, AC/DC, Kiss, and Def Leppard.

His first band, Slack Alice, didn’t reach the heights its members had hoped for, so Strange found himself sitting behind the drums for a couple of cover bands before becoming part of the line-up for popular Belfast outfit No Hot Ashes in 1986. A record deal with GWR, thanks in no small part to Strange’s powers of persuasion, saw the band move to London a year later.

Strange later accepted an offer from Jon Vyner to join The Bron Agency and book some gigs. “I used to do [that] anyway – it was always left to the drummer to chase support tours and gigs,” he told IQ in 2009. Tapping up GWR’s Doug Smith to secure his acts occasional support slots with the likes of Motörhead and Girlschool, Strange worked tirelessly, making himself known around London’s gig circuit, making friends with bands and offering to book shows. “I did a lot of analysing about how the business worked, and it was a steep learning curve. I was intrigued by it – how tours were routed, why some bands played clubs not halls, etc. It was very exciting.”

Strange moved to Adam Parson’s Big Rock Inc, and then to Prestige Artists working with Clive Underhill Smith and Rob Hallett. In 1992 he moved back to Northern Ireland promoting at the Limelight with Eamonn McCann. The move led to one of his biggest breaks when he discovered a trio of school kids, Ash, becoming the band’s agent and working with Rob Challice at Forward Artist Booking.

“His talent and expertise coupled with his never ending enthusiasm has made him one of the world’s leading music executives.”

Feeling the need to work at a larger agency, Strange moved to John Giddings’ Solo, before another move to Fair Warning/Waster Talent where he met fellow X-ray founders Ian Huffam and Jeff Craft. Adding Scott Thomas and Martin Horne to the mix, the five individuals launched X-ray in 2005, fast becoming one of the UK’s most respected booking agencies.

Strange was renowned for signing and developing US artists. “I’ve always listened to American music, and a lot of the bands I liked when I was younger were from the United States,” he told IQ in 2018. His relationship with Interscope Records’ label head Martin Kierszenbaum and A&R chief Don Robinson led to an introduction with Eminem, who alongside Queens of the Stone Age became a cornerstone of an eclectic roster that included Coldplay, Maximo Park, Feeder, Snow Patrol, The Charlatans, Jimmy Eat World and more, many booked with longtime colleague Josh Javor.

Strange was a longstanding ILMC member, and in March had picked up the top agent award (‘second least offensive agent’) in a special decade showdown at the Arthur Awards. Strange had topped the category twice before. He appeared in person to collect the gong at the Royal Albert Hall, thanking his clients, and “all the people at Team Strange and Xray Touring who’ve all had a very difficult year but we’re getting through it.”

Fellow X-ray director Adam ‘Rad’ Saunders posted, “Friend, ally, mentor and the single most influential person in my career. Steve was an irrepressible juggernaut of a person. Full of passion, talent and a ridiculous laugh. I will miss him hugely. I can’t really imagine a music business without Steve in it. It leaves a hole so big it cannot be filled.”

In May 2018, to celebrate Strange’s 50th birthday, IQ published a surprise feature article with comment and congratulations from many of his friends and colleagues.