Scientific data from pilot concerts in five European countries, most recently Belgium, demonstrate that live events do not accelerate infection 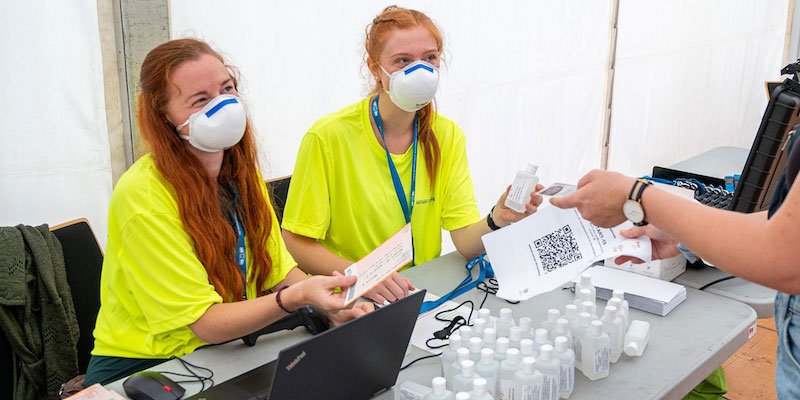 As businesses and individuals in the UK come to terms with the government’s decision to delay the sector’s reopening by a further four weeks, a growing body of evidence demonstrates that concerts, festivals and other live events held under controlled conditions do not contribute to an increase in transmission of Covid-19.

Data gathered from test events across various European countries is building a picture that if every member of the audience is tested prior to a show, and only those who return a negative test are admitted, the chances of them being infected with Covid-19 during the show are extremely slim.

Crucially, despite the pilot shows listed below using different audience configurations, all of them tested participants before and after the event, and all were hailed as successful both by organisers and by the scientists who monitored the health aspects.

Examining the published evidence of different test events around Europe makes for fascinating reading, albeit with very similar results…

Belgium
Zero positive cases of Covid-19 were detected seven days after test events in Spa and Namur, neither among the participants nor the control group, the company in charge of testing at the shows, DNAlytics, announced in May.

Those events were the first of six pilot experiments organised in the cultural sector by the Wallonia-Brussels Federation. “In the case of Spa, they establish quantitatively that the organisation of an indoor concert can be envisaged with safety, according to an audience size of 50% of the hall’s capacity and by applying the barrier gestures that have become familiar to us,” says Thibault Helleputte, CEO of DNAlytics.

“In the case of Namur [an outdoor event], the results show that, provided some basic health rules are followed, attendance at a show is not associated with a measurable increase in coronavirus contamination.”

“Concert halls and theatres are not places of infection”

Germany
A scientific study in Germany of the movement of airborne particles in an indoor environment showed a negligible risk of infection in properly ventilated concert venues.

The test, using a robot, at Dortmund’s 1,500-seat Konzerthaus, was carried out over three days in November by the Fraunhofer Heinrich Hertz Institute of Goslar and particle measurement company Parte Q, with the backing of Germany’s Federal Environment Agency. It followed August’s Restart-19 study (using human participants) by the University Hospital of Halle, which concluded that, with adequate ventilation, live events posed a “low to very low” risk of person-to-person transmission.

The Konzerthaus Dortmund study followed the first pilot show, the similarly successful Restart-19 in Leipzig, in August 2020, which provided the template for subsequent events internationally.

In Barcelona, the indoor concert setting did not increase the coronavirus risk

Spain
Festivals per la Cultura Segura, the organiser of a Barcelona pilot concert in March, also reported that the event had no impact on Covid-19 transmission among attendees, despite the lack of social distancing observed at the show, which had 5,000 attendees.

Having analysed the data, doctors from the show’s medical partners concluded that the indoor concert setting did not increase the coronavirus risk – with concertgoers exhibiting a lower incidence of Covid-19 than the general population in Barcelona at the time.

While the use of a medical-grade FFP2 mask was mandatory, there was no social distancing among fans, who were separated into three areas, once the show got underway.

Of the 4,592 concert attendees who gave consent for the doctors to analyse Covid-19 tests taken after the event, six tested positive for Covid-19 within 14 days of the Barcelona show (and additional analysis suggests that four of the cases originated outside the concert). Those six represented a cumulative incidence of 130.7 cases of Covid-19 per 100,000 inhabitants, far lower than the 259.5 cases/100,000 people in the city’s population at the time.

Three months’ worth of pilots in the Netherlands proved the risk of infection, when following certain hygiene and testing protocols, is about the same as being at home

Netherlands
Perhaps most compelling are the findings from three months’ worth of pilot events in the Netherlands which proved that the risk of Covid-19 infection, when following certain hygiene and testing protocols, is about the same as being at home.

Organiser Fieldlab Evenementen included a series of events in its programme, including the Eurovision Song Contest in Rotterdam which was attended by 3,500 fans, but also business conferences, festivals, arena shows, an awards ceremony and outdoor sports events in a range of formats and capacities.

According to Fieldlab’s data, 100%-capacity events are possible under the Netherlands’ lower two risk levels (caution and concern), with a reduction in capacity necessary for levels three and four (serious and severe, respectively).

Fieldlab’s Dimitri Bonthuis says, “Provided you take the right measures, the risk of getting infected at a Fieldlab event is the same as at home.”

On the back of those figures, Dowden said he was “very hopeful” the full reopening of venues, theatres and clubs without social distancing would take place on the target date of 21 June, though this didn’t come to pass.

While the ERP has yet to be released, Dowden has confirmed there were no positive cases from the Brit Awards, which took place with an audience of 4,000 at the O2 in London last month.

There were two positive Covid-19 tests from the ERP’s Sefton Park Pilot, in Liverpool, which involved 5,000 fans, while nine cases were detected among the 6,000 clubbers who attended two dance events, also in Liverpool.

Zero cases were reported from a football match at Wembley, but four infections were detected at the Crucible Theatre in Sheffield, which hosted 17 days of the World Snooker Championship.

No social distancing was in place at any of the ERP events, which used lateral-flow tests to check attendees for the coronavirus prior to entry.