The latest tests, a dance event and a concert, took place in Amsterdam's Ziggo Dome at the weekend with 1,300 participants each night

Thousands of Dutch residents took part in the latest Back to Live test events, which took place in the Ziggo Dome (cap. 17,000) at the weekend.


The next day André Hazes delivered a concert in the venue, with the same amount of participants.

The events, organised by Mojo and ID&T, ran from 3 pm till 7 pm in order to comply with the nationwide curfew from 9 pm to 4:30 am, which has been in place for the past six weeks.

Those who successfully secured a ticket had to have received a negative Covid-19 test 48 hours prior to the event. Twelve applicants had received a positive test result and were turned away. Those who did attend were asked to take another test five days afterwards.

Those participating were traced in all their movements and contacts through a tag.

Participants were divided into five ‘bubbles’ of 250 people, plus one of 50, each of which had to comply with different rules.

In bubble 1, participants were told to wear a mask throughout the event. They could decide for themselves where to stand but had to ensure that there were no more than three people in a square metre of space. 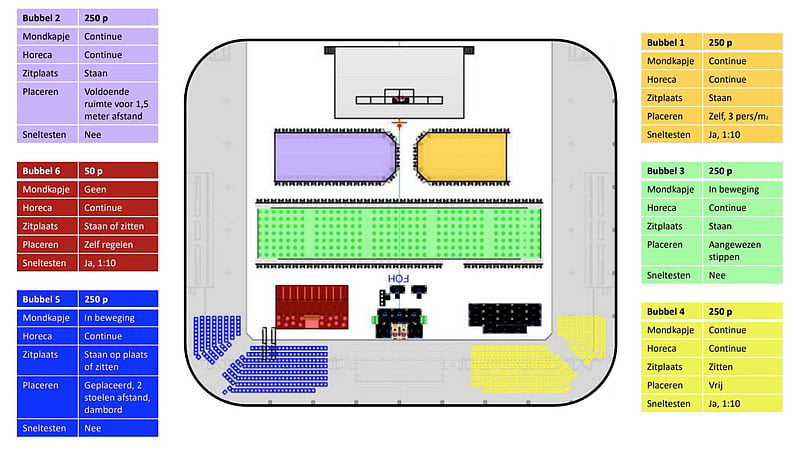 In bubble 4, people wore masks all the time and were permitted to sit down. In bubble 5, people wore masks only when on the move. There were standing and seating areas. The participants were put in their dancing spot by the organisers with two chairs spacing people apart.

In bubble 6, participants did not wear masks and were allowed to stand or sit where and when they pleased.

One group was given a fluorescent drink and encouraged to sing and scream to the music in order to examine how much saliva was released at moments of peak revelry, according to The Guardian.

Tim Boersma, of Fieldlab, the organisation carrying out the research for the government, told the newspaper: “We hope this can lead to a tailor-made reopening of venues. Measures are now generic, allowing for instance a maximum of 100 guests at any event if coronavirus infections drop to a certain level. We hope for more specific measures, such as allowing the Ziggo Dome to open at half its capacity.”

Rosanne Janmaat, COO of ID&T, said the events were “a historical moment”, adding: “Hopefully this is the key to being able to reopen”.

The Back to Live series has so far included Back to Live Business, which simulated a conference environment, took place at Utrecht’s Beatrix Theatre on Monday (15 February) with 500 people, as well as two football matches with 1,200 supporters at each.

Two music festivals – a dance music event and a rock/pop festival – will take place on Saturday 13 and Sunday 14 March, respectively, on the Lowlands site in Biddinghuizen, in the central Netherlands.

Government advisers will use the behavioural data collected to inform decisions on whether or not to ease restrictions on nightlife in the near future. It is more than a year since gatherings of more than 100 people were banned in the Netherlands. All bars and restaurants in the country have been closed since mid-October.