ILMC 33: The New Bosses reflect on a year of turmoil 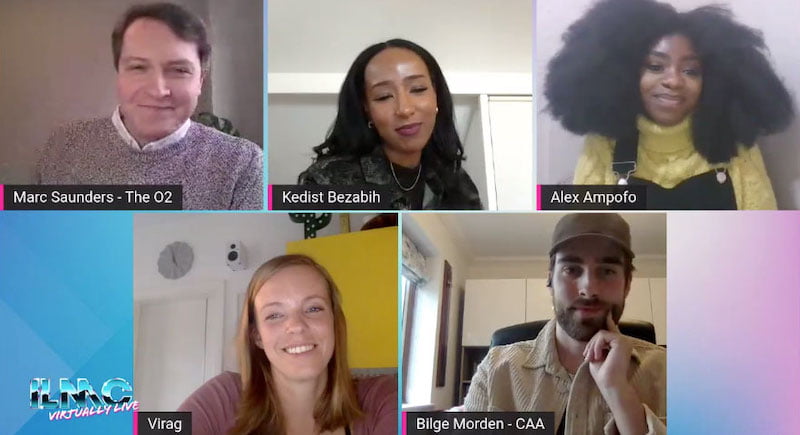 While Futures Forum, ILMC’s conference within a conference for young professionals, took a year off in 2021, its traditional opening session survived ILMC’s move online, welcoming another five emerging execs to take the temperature of the business from an under-30’s perspective.

Chair Marc Saunders (The O2 London) opened by asking about how the panellists had spent the last 12 months, with panellists describing the usual mix of holding dates and moving shows, as well as listening to plenty of podcasts.


“It’s been a year and a half since my last show, and I’m very uncertain about what’s going to happen this summer,” said Sziget’s Virág Csiszár, reflecting on a difficult year. “It’s been a really tough time – we’ve had to let go of a lot of good colleagues and friends.”

Livestreaming has filled the gap to a certain extent, said Metropolis Music’s Alexandra Ampofo, winner of the 2021 Tomorrow’s New Boss award, although it will never replace the real thing. “Livestreaming is here to stay,” she said, pointing out how the format can enable people, such as those with disabilities, who wouldn’t normally attend a ‘real’ gig to see a show. “It’s really great from an accessibility point of view,” she continued. “It’s a real progressive move for our whole scene, given that there are people who can’t go to [physical] gigs.”

“When we return, I think it will be a mix of shows and concert streaming,” agreed Csiszár.

Bilge Morden from CAA added: “The ones that work are the ones like Dua Lipa’s [Studio 2054] with a very strong concept, that aren’t just a livestreamed concert.”

With talk turning to panellists’ routes into the industry and their obligations to the next generation, Morden said it’s essential that even internships and entry-level jobs are well paid, to ensure a diversity of voices. “Even when I was doing a paid internship, I was still putting on shows in Liverpool” to make ends meet, he said.

The legacy of Black Out Tuesday and the Black Lives Matter movement makes the conversation about diversity particularly important, said Kedist Bezabih from FKP Scorpio in Norway.

“It’s not just race – it’s gender, and even disability,” added Ampofo. “When you listen to people you’re able to make the tangible change you need to make. Companies need to put their money where their mouth is.”

Looking ahead to the immediate return of concerts, Bezabih said she believes we’re going to see enhanced cleaning and sanitisation for years to come, adding that “2022 is going to be amazing. It’s packed with shows already. I’m very hopefully for 2022.”

“I’m also really optimistic for the coming years,” added Ampofo, saying she also thinks that greater “sanitisation is here to stay – and it should, to be honest.”

Concluding on a positive note, Morden said: “I’m the most optimistic I’ve been in a long time. Keep the faith.”

Wasserman Music launches in the US