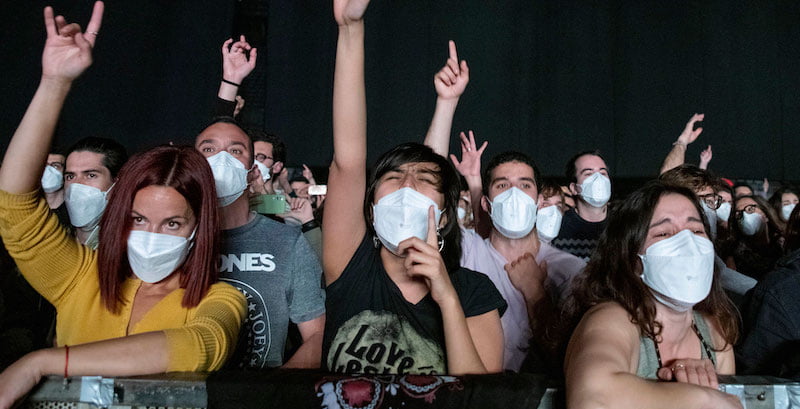 Love of Lesbian fans in the front row

Organised by Festivals per la Cultura Segura (Festivals for Safe Culture), comprising festivals including Primavera Sound, Sónar and Cruïlla, the concert, by Spanish band Love of Lesbian, sold out quickly after going on sale earlier this month. In total, 4,994 people attended the show, after six ticketholders were found to have Covid-19 during the pre-gig tests.

The day of the concert began at 8am, when the first attendees arrived at the three Barcelona venues which were being used as Covid-19 test centres: Sala Apolo (which had hosted an earlier pilot concert), Sala Razzmatazz and Sala Luz de Gas.

All 5,000 fans passed through one of the three sites, which were staffed by more than 200 people in total, including medical professionals from local hospitals. Of the 5,000, 4,994 tested negative for the virus, while the six people who tested positive had their tickets refunded.

The final tests finished at 4pm, with entry to the show open from 5pm. After gaining entry to the Palau St Jordi (using an app which contained both their ticket and negative test results), fans were given a medical-grade FPP2 mask to wear and shown to one of three pre-assigned areas set up in the arena.

Once inside, local heroes Love of Lesbian played the “greatest hits of their long career”, with concertgoers – seeing a show in a non-socially distanced format for the first time March 2020 – responding to the excitement of being part of “a historic event”, say organisers.

A video posted to the Palau St Jordi Twitter feed shows the thousands attendees dancing as Love of Lesbian perform on stage:

The concert marked a “great step forward”, says Festivals per la Cultura Segura, who hailed the event as an “example of the unity of the live music industry, the scientific community, the different administrations [the various Spanish governments] and committed sponsors”. The collective also thanked concertgoers for their cooperation and “civility”.

According to organisers, “conclusive data” from the concert will be available from 10 April, and will be released shortly after, following consultation with Catalonia’s ministry of health.

Speaking to the Catalan News Agency (ACN), Cruïlla director Jordi Herreruel said he hopes the show will demonstrate that festivals like his can take place safely this year.

“If the results confirm our theories, we will have the door open to the return of big events this summer,” he said. Previous pilot concerts, including the Sala Apolo study in Spain and two events in Germany (Restart-19 in Leipzig and a test show at Dortmund’s Konzerthaus), have demonstrated that live entertainment can take place safely in a pandemic situation.