Coverage of the 13th edition of GEI, the newly virtual conference for sustainability in the live events sector, which took place today 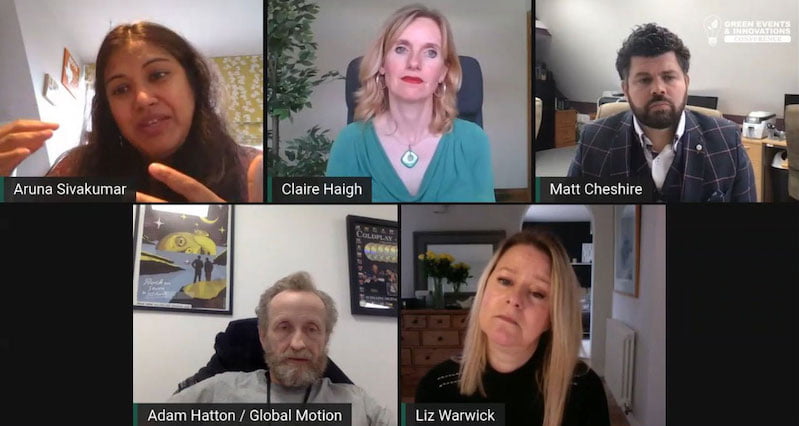 The Elephant in the Road panel kicked off GEI 13

The 13th edition of the conference for sustainability in the live events took place online today, welcoming industry leaders, professionals, visionaries, governments and all individuals and organisations who are working to bring environmental and social sustainability to the live events, sports and creative sectors.

The Green Events & Innovations Conference (GEI) was presented by A Greener Festival (AGF) in partnership with ILMC. Passes for ILMC, which begins tomorrow, are still available here.


17:00
A Greener Tour Round III brought together key stakeholders from inside and outside of the live music industry to discuss what we can do collectively to create the regenerative tour of the future, post-pandemic.

Tom Schroeder, Paradigm Talent Agency (UK), suggested that the live entertainment business could use its unique power to reach and inspire the masses to further the cause.

“We also have this extra string to our bow. We can do huge events to highlight the message of what’s going to happen to the planet and what we need to do and that’s also going to change and reach areas that aren’t just about the show itself.

“Nothing to do with Live Aid was directly producing food in Africa but what it did is it made the Western world understand third world poverty – for 20,30,40 years it had a huge impact. And we know that musicians are incredibly good at communicating causes to massively engaged audiences.”

Nuno Bettencourt, guitarist for Extreme (US), agreed, saying that the industry should be empowering its artists to speak about sustainability, as they have the power to influence others.

“We need the agents and managers and experts to give artists a utility belt and superhero cape by showing them how to do it and make them excited about the cause. Fans want to be inspired, they don’t want to hear you blame the politicians.”

Mark Stevenson, Reluctant Futurist, MOD & ClientEarth, added: “Artists are very good at taking ideas and concepts and philosophies and ways of looking at the world and making them hugely, hugely popular. So why not apply that to sustainability as well? You’ve got to make sustainability and regenerative ways of thinking as aspirational as we’ve made a rock and roll lifestyle. I want to second what Nuno said about showing that the solutions are out there and I think you need to give people agency.”

Anna Golden, AEG Presents (UK), says that for live music fans to get behind sustainability, systems need to be in place at venues so “it can become second nature and when people go to a gig they feel like they are doing good”.

However, Golden emphasised that any progress is still a step in the right direction: “It’s not that we have to get this perfect the first time around and yeah we do need to get some sort of charter and some sort of objectives and achievable roles in place, but actually if we’re having a slow start because resourcing and finances are tight, all we have to do is be better than yesterday.”

“All we have to do is be better than yesterday”

15:50
GEI and IPM join forces to discuss the viability of sustainable production during It’s Not Easy Being Green.

Carlot Scott, Tait/Sipa (UK), kicked off the panel on an optimistic note, saying she could see the industry returning to touring with ‘a greener way of thinking’ after the pandemic.

“During the hiatus, many of us, and individual organisations and groups have started to pull together and started to become a cohesive force started to really analyse where we were going wrong as an industry and how we can be better.”

“One of the things that we really discovered was that people were already on board already with the idea of sustainability, they just didn’t know what to do and they wanted some guidelines and a way to start their journey,” she said.

Ric Lipson, Stufish (UK), says that, as set designers, they’re often ‘berated’ for designing something that’s too big and that uses too many trucks but that’s not the biggest issue in their pursuit to be more sustainable.

“I don’t think necessarily the scale of the production is the problem, but it’s the speed at which the scale of the production has developed and the choices that have to be made to enable that to happen whether that’s going down the road of using something that’s been used for 20 years because we know it works but it might be too heavy, versus we talked about that material because it’s coming from some part of the world that you know we’d have to fly it here or whatever else.”

“We need to go to the promoters and say: look, if you want us to come in with a set design that fits a good budget and doesn’t end up [being used for other artists too], we need to understand the routing schedule of the tour. And maybe the conversation with the artist has to happen much earlier, not necessarily when they’ve got an idea of what the design is but what they want the concept of the show to be.”

“People were already on board already with the idea of sustainability, they just didn’t know what to do”

15:00
Panellists on the We Are Not Socially Distanced session had one resounding message for viewers: privilege comes with responsibility.

Michael Fritz, Viva Con Agua (SA), said: “I think it’s all about how much access you have, either to education, human rights, money, technologies or resources. Those are privileges and if you have a privilege you have big responsibility.”

Ash Perrin, The Flying Seagull Project (UK), added: “I’m never gonna use the word ‘underprivileged’ again because it suggests that privilege is the normal state and underprivileged is a rare state of people who have failed but actually privileged is the rare and abnormal.”

Yaw Owusu, BrukOut Entertainment/PRS Foundation (UK), agreed: “If you’re in a place where putting food on the table or surviving day to day is not your concern then you’ve got more space to wonder about the causes.”

LIVE on #GEI13, experts share insight and experience using voices and platforms' power to create the pathways to make direct and meaningful positive impacts beyond the stage and field. pic.twitter.com/lqQneQMtoK

12.30
Post-Pollution Politics, Industry & Culture featured dialogue between the live events sector, green activists and Niclas Svenningsen of the United Nations’ global climate action team as to how events can contribute to ensuring targets for emissions reductions and sustainability are met.

Svenningsen spoke of the importance of getting back to business “in a smarter and better way”, while Green Music Initiative’s Jacob Bilabel said change is inevitable – it’s how that change happens that we have a choice in. “We are locked in structures that are not good and not right, and they’re not even making us happy any more,” he said. “Do we want to have that transformation happen by disaster or by design?”

Dismissing the concept of a pollution tax as “absurd”, Dave Ojay of Kenya’s Naam Festival said: “How can I give you a licence to destroy nature simply because you can pay? Rather than a pollution tax, let’s force the polluter to set up a recycling or regeneration plan to keep [their business] green.”

Green energy entrepreneur Dale Vince, who stayed on after his keynote, said the events sector has “so much more power in this than you think. The choices you make can help steer the world in a different direction.”

“Do we want the transformation to happen by disaster or by design?”

12.00
Dale Vince’s keynote with AGF’s Claire O’Neill (as well as Vince himself) is a hit with Alison Hussey of concierge company Rockstar Services:

Quite frankly have a little bit of a crush on @DaleVince from @ecotricity and @ForestRovers_FC being interviewed by @erialC_Claire22 for @agreenerfest as part of @ILMC Discussing the huge issues of energy, transport and food but also orchids, slow worms and an organic pitch! 💚

10:30
The Elephant in the Road session posed the question: What with audience, artist/athlete and crew transport, and tech, behaviour and lifestyle, can we really keep the show on the road within ecosystem boundaries?

Matt Cheshire, The Needs Group, UK said: “With regards to the ground elements, we need to look at setting up electric charging points at festivals or hotels, looking at ground logistics from airports from accommodation to festival sites, and looking at solar panels and things like that.”

However, in terms of reducing travel for touring artists going from festival to festival, Cheshire points out “radius clauses in some of the contracts are still quite substantial”.

Adam Hatton, Global Motion, UK, said: “I think the real key here is that if we look for technology to replace the technology we have now so we can carry on living the lifestyle, we live now I think we’re dreaming. What this really boils down to is lifestyle changes we need to work out what we want to spend our carbon on and focus on that and make changes in our lives in order to accommodate that.

“The only real way of making this sustainable, I think, is by reducing the amount of kit we take around the world. For example, why are we moving stages around the world? It should be already there already waiting for us.”