The perfect storm: Inside the UK’s only live shows

It’s taken four times more toilets and a space 15 times the normal size. Meet the team who pulled off the UK’s only working arena 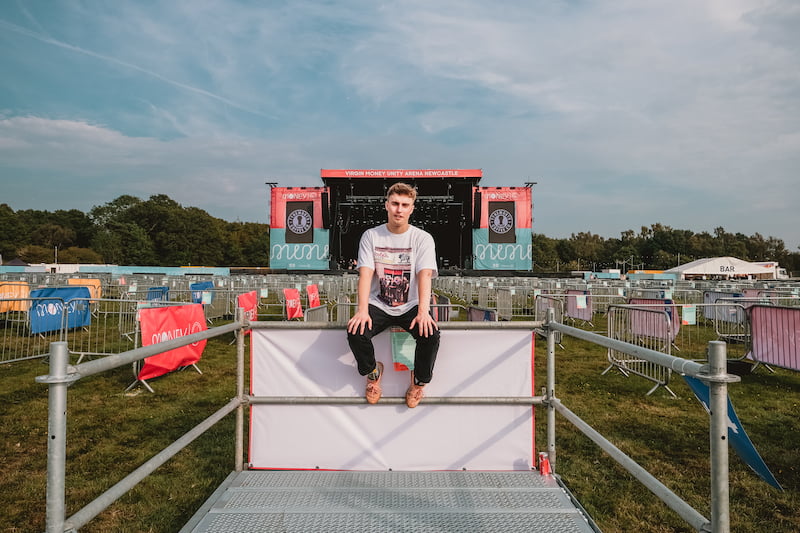 Selling over 72,000 tickets for a concert series that began when live shows in the UK were – strictly speaking – not allowed, is no small undertaking. But then neither is building a new outdoor arena for shows at a time when strict social distancing rules are in place.

“All the things that could have gone wrong would’ve gone wrong on the opening weekend but they didn’t,” says Jim Gee, a director at Manchester-based production company, Engine No.4.

Gee and his team have spent the last few months working tirelessly on the launch of the UK’s only major summer concert series of 2020 at the country’s first socially distanced arena in Newcastle. And it’s a remarkable story in a time of lockdowns, postponements and cancellation.

The Virgin Money Unity Arena is set to host 29 events in 26 days, featuring artists including Supergrass, The Libertines and Maximo Park.

Sam Fender opened the series on 11 August with a sold-out show, which Gee deems were an enormous success despite the high stakes. “We went from never having done this kind of event before, straight to a full-capacity for the first show but it opened with a bang,” he says.

“We went from never having done this kind of event before, straight to a full-capacity for the first show”

The 2,500-capacity shows are the vision of SSD Concerts boss Steve Davis, with whom Engine No.4 worked on Newcastle-based festival This Is Tomorrow.

Having one pandemic project under their belt already – the UK’s first socially distanced dining concept, Platform 15, at Escape to Freight Island at Depot Mayfield, Manchester – Engine No.4 was the ideal choice for Davis and SSD, and the team set to work on finding the perfect site for the concert series they’d dreamt up.

“We looked at various places around Newcastle and the Racecourse ticked all the boxes. We needed a big car park capacity, a big arena capacity and a big capacity in between those sites for walking and socially distanced queueing,” explains Gee.

The site features 500 viewing platforms each accommodating up to five people. Attendees were given 20-minute slots in which to arrive, though Gee says that was the only aspect that didn’t quite go to plan on the first night.

Avoiding queues was one of the key factors in the event running smoothly, along with space and sanitation

“The thing that slightly caught us off guard was how quickly people arrived. They were raring to get in ahead of their segmented times so we ended up having slightly longer queues getting into the event than anticipated, but we tweaked that after the first night,” he says.

Avoiding queues was one of the key factors in the event running smoothly, along with space and sanitation, says Gee. And the rest is “purely common sense and over-speccing things”.

But of course, over-estimating facilities is just one of the factors driving up costs for an event like this. “Holding an event for 2,500 with facilities that could normally take 35-40,000 people clearly isn’t a brilliant financial model,” he laughs.

Gee notes that for events like these, commercial support from sponsors like Virgin Money is crucial. He also says that although the financial model of socially-distanced events like this one isn’t sustainable, it is a step closer towards a viable model.

“I think you can mitigate those costs in some way with the length of the run,” he says. “What we’ve done here is a bit like the venue model. If you can create a temporary venue and put enough shows into that venue then at some point you might start to break even and maybe make a bit of money but to try and do this for a weekend or a festival or a week doesn’t make sense,” he adds.

The desired time frame was another crucial consideration when choosing the site, says Gee, but the Racecourse was able to provide the licences and planning permission required for the event.

However, the success of the event wasn’t just down to right place, right time. “There was a lot of stakeholders working together in the perfect storm,” says Gee, crediting the enthusiasm of Newcastle City Council, the emergency services, Virgin Money and the artists who have to “buy into the concept”.

According to Gee, the series has been such a success so far, Newcastle City Council has been approached by a number of other local authorities asking for pointers. On top of that, the Department for Culture, Media and Sports and Public Health England has accepted an invitation to view the systems in place.

“A lot of hoops have had to be jumped through to make this work and it isn’t particularly economically sustainable but what we’ve managed to create could be used as a model going forwards,” says Gee.