Campaigners for mental health, accessibility and diversity spoke on continuing their work during lockdown and looking to the future for the latest virtual discussion 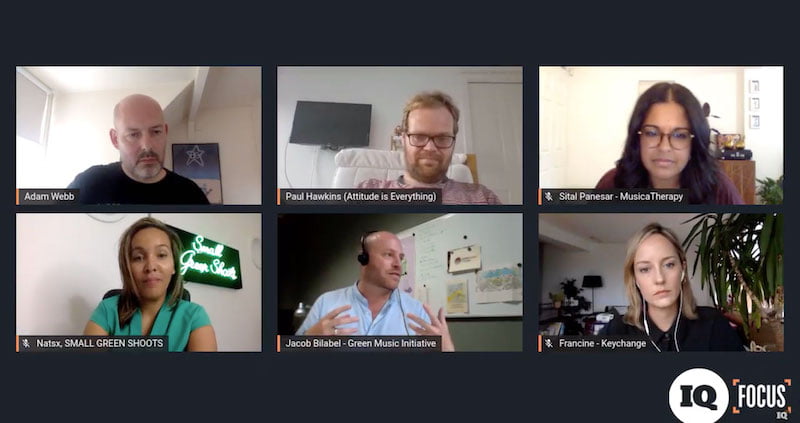 The Lost Causes: Campaigners & Advocacy, the 11th IQ Focus virtual panel and the first following last week’s break, caught up with industry pros whose work advocating for mental health, accessibility and diversity has been put on hold by the Covid-19 pandemic.

Chaired by FanFair Alliance’s Adam Webb, yesterday’s discussion – the first in a series of ‘Lost Causes’ panels – welcomed Francine Gorman, outreach coordinator at Keychange; Jacob Sylvester Bilabel of Green Music Initiative; Natalie Wade, founder of Small Green Shoots; Attitude is Everything’s head of volunteering and skills development, Paul Hawkins; and Musica Therapy’s Sital Panesar to find out what they’d been doing during live music’s shutdown – and how their work continues when it returns.


Wade expressed a typical view when she said Small Green Shoots – a charity which aims to help people from disadvantaged backgrounds engage with music and the arts – went from being “on the crest of the wave” at the start of 2020 to  “everything being cancelled this summer”, meaning “no one could finish their projects”.

Similarly, said Hawkins, “the aim for 2020 was to be one big 20th-anniversary celebration” for accessibility charity Attitude is Everything. “The one positive we’ve got is that a 21st birthday still sounds like something worth celebrating!” he joked.

Panesar said the worldwide lockdowns in March weighed heavily on the industry’s mental health, as “people lost their coping mechanisms”. “Alongside the additional pressures of being in lockdown, that really compounds difficulties,” she said.

For disabled people, Hawkins added, the pandemic has had a “huge impact on people who don’t like to think of themselves as vulnerable”.

Bilabel said March “felt like a car crash in slow motion”, but the live music industry – and everyone working in it – will ultimately come through the other side

Gorman spoke of the importance of “building back better” when touring and festivals do resume. “Representation is a massive part of that conversation,” she explained. “There are all kinds of voices and they deserved to be sustained in the industry, at every kind of level.”

“We want to make sure that when live music does start again, disabled people have the same opportunities as any other talented people,” Hawkins added.

Bilabel said March “felt like a car crash in slow motion”, but emphasised that the live music industry – and everyone working in it – will ultimately come through the other side.

“Some companies will die, but the people behind them won’t,” he explained. “And the demand for culture – for festivals, for music, for cinema – will be even bigger than it is today.”

The return of live, added Wade, is a chance for “people to say yes” to new opportunities. “It’s so easy to say no, because there’s less work. But I want people to take a chance, to say, ‘Yes, maybe we can help you – let’s get behind it.’”