Problems with cash flow, lack of government support, renegotiating contracts and sponsorship for 2021 were among topics discussed in the latest IQ Focus session 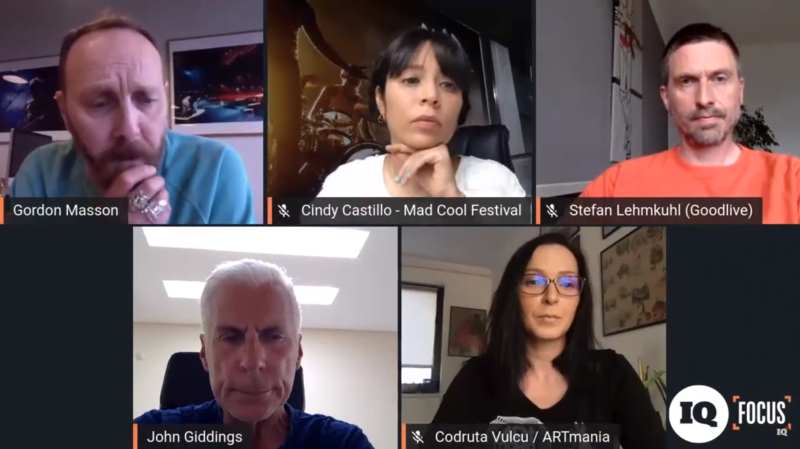 The second IQ Focus festival panel, Festival Forum: The Next Stage, saw festival leaders from around Europe discuss the thorny issues of refunds and insolvency, as well as the outlook for 2021, in what should have been the halfway point of the 2020 season.

The current situation, said Giddings, has made it “blatantly obvious” that the business has an issue with cash flow and that many promoters don’t have any kind of “war chest to go forwards”.

“I don’t understand how you bankrupt companies by refunding tickets,” he said. “You shouldn’t be spending the ticket money on costs – you need to be in the position to be able to refund all the money. We have a responsibility to the audience.”

Giddings noted that some promoters have got into the habit of “taking money from the future to pay the past”, and it has become clear that this doesn’t work.

“This may teach people a lesson on how to run a business,” he said.

The other panellists agreed to an extent, but noted that a lack of support and clarity from the authorities has complicated matters in a lot of cases.

“Our government hasn’t even declared force majeure yet for live events”, said Castillo, who promotes Madrid’s Mad Cool festival. “This has put us in a very tricky legal situation.”

The Mad Cool team only started its refund period last week, explained Castillo, but is allowing people to make the decision on whether to hold onto tickets for next year or refund them until after the full 2021 line-up is revealed.

In Romania, said Vulcu, an immediate reimbursement “would have bankrupted many organisers”, as the government is implementing new restrictions every two weeks.

“There are companies with shows built up, everything ready and paid for, and then suddenly it had to be cancelled,” she said. A voucher scheme implemented by the government, allowing promoters to offer credit for shows or merchandise in place of cash refunds, has been a lifeline for many.

ARTmania did choose to offer refunds, but only received 43 requests. “Our decision to trust our audience really worked for us,” said Vulcu, adding that this tactic may “work for rock and metal audiences perhaps more than for others.”

Lehmkuhl, who runs German festivals including Melt, Splash, Superbloom and With Full Force, added that a lot depends on how long the shutdown continues for.

“So far, we have been able to spend our own money,” he said,” but the next step would be to touch the ticket money, then to get low-interest credit from the government in case it takes longer.

“Our decision to trust our audience really worked for us”

Mindful of cash flow, Goodlive has asked for deposits back from acts it booked for this year. “There is mutual understanding there,” said Lehmkuhl. “We are trying to rethink our festivals for next year, adjusting dates and concepts. We will start from scratch in some ways next year.”

As the promoter of Isle of Wight Festival, Giddings said he also asked for deposits to be returned. “We are doing contracts going forward for next year and will pay the deposit then.”

In terms of being an agent, Giddings said he is not going to take a fee reduction for artists. “I would rather they didn’t play than take a reduction on my act,” he said.

“As an agent I wouldn’t book an act for festival next year unless they’re going to pay me the same money,” he said, “and we’ve done the same thing as a festival.”

Ticket prices will also have to stay the same, as so many fans are rolling over their tickets to next year. “Anyone raising ticket prices is insane,” said Giddings. “We need to get an audience back first before charging more.”

Vulcu, who said she left the money with the agencies when rescheduling, agreed that she will not be paying artists less money, “but we will definitely not pay more”.

“Romanian audiences will have a lot less money and the priority will not be going to festivals,” she said.

“As an agent I wouldn’t book an act for festival next year unless they’re going to pay me the same money, and we’ve done the same thing as a festival”

Castillo said her experiences have been “positive” with every agent. “We are looking out for each other to prevent the industry collapsing,” she said.

The Mad Cool booker admitted that it will be “really hard” to get the same audiences next year, “so we need help with fees to make things happen”.

“We are running a big risk with the festival next year”.

The recovery of the music business in Spain “hasn’t event started yet”, said Castillo, as “you first have to understand our business model, identify problems and offer solutions – and we haven’t been offered any solutions yet.”

Vulcu added that support packages offered by governments in western European countries such as Germany and the UK may put newer markets at a disadvantage, as they are less likely to receive support.

Giddings replied that, although the recent culture funding package announced by the UK government is sizeable, “we have no idea who it’s going to go to and how it will work”. He added that it was more likely to benefit venues than agents or promoters.

Sponsors are another issue for 2021. “Investing in events is risky now,” said Castillo, “and this is definitely affecting us.”

Vulcu said that, while ARTmania has secured its main sponsor for next year, “it is very difficult to get new sponsors”.

“Investing in events is risky now, and this is definitely affecting us”

Most Isle of Wight Festival sponsors have also “stuck with us” said Giddings, who believes that sponsors will start to come back in once it’s clear the event is going to happen, although they may be “different kinds of sponsors relating to our changing normal”.

Giddings added that he is “praying” for some direction on what will happen next year by Christmas, with clear information needed by March at the latest.

For Lehmkuhl, the key for the “new normal” is a high level of flexibility and an ability to keep running costs very low.

The Goodlive co-founder said that the idea of testing at festivals “is one of the few realistic plans [for getting event up and running] nowadays”, provided that the government is able to provide tests for free.

“It is hard for me to imagine that we will be able to do festivals as normal next year,” he admitted, “but one thing’s for sure, I will not be doing them with social distancing.”

The next IQ Focus session State of Independence: Promoters will take place on Thursday 16 July at 4 p.m. BST/5 p.m. CET. To set a reminder head to the IQ Magazine page on Facebook or YouTube.