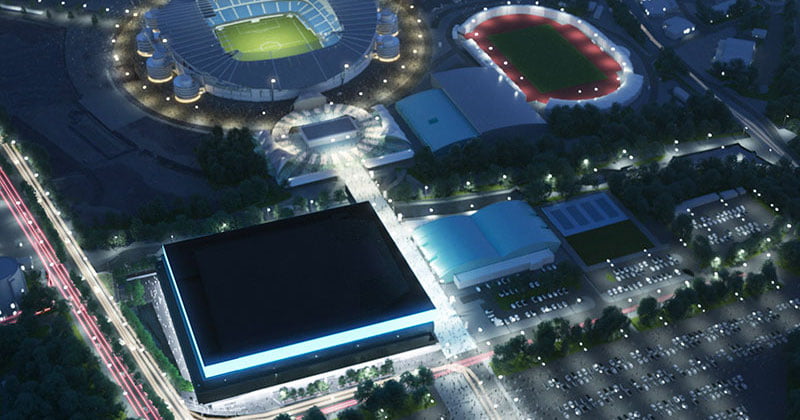 ASM Global, operator of the UK’s Manchester Arena, has submitted a formal objection to plans for a new 23,500-capacity arena in Manchester, alleging again that a second large entertainment venue in the city is unsustainable and would have a negative affect on Manchester’s economy.

The objection by ASM (formerly SMG Europe) follows the filing of a planning application by Oak View Group (OVG), the company behind the £350 million project, which was officially unveiled earlier this year following a six-month feasibility study by OVG.


If approved, the new venue – located on the Etihad Campus, the site of Manchester City FC’s Etihad Stadium in Eastlands, in east Manchester – would be, by some way, the largest indoor arena in the UK, and go head to head with the 21,000-capacity Manchester Arena in Manchester city centre. The planning application also includes plans for a 180,000+ sqft food and beverage/retail space.

Citing independent analysis by consulting firm Charles River Associates, ASM claims to have uncovered “significant flaws in the evidence supporting the planning application” that raises “legitimate concerns” about the impact the new venue would have on Manchester Arena and other city-centre businesses.

Among other points, ASM – which is supported by several other city-centre businesses, including the Arndale shopping centre and venue owner Living Ventures – says OVG’s market projections are over-optimistic and at odds with historical data; that public-transport infrastructure would be unable to cope with increased football; and that Manchester, despite being a one-arena city, is already well-served by major live entertainment venues.

“A new venue, with world-leading technology, would help to grow the overall entertainment market within Manchester”

A new mini-site, together.manchester-arena.com, serves as a hub for Manchester Arena/ASM Global’s objections to the new arena.

“We have clear reasons for opposing a new arena in Eastlands, and have never shied away from making our voice heard. We firmly believe that this planning application presents a very real threat to not only our venue and transformative redevelopment plans, but to our neighbouring hotels, bars, restaurants and stores, at what is an already fragile time,” reads a statement from ASM, which also commissioned a separate study that concludes a second arena would “shatter” Manchester city centre’s economy.

“Independent analysis clearly demonstrates there is no demand for a second major venue in Manchester. To introduce another would risk running the other out of business, taking with it the visitors and spend it positively contributes to surrounding businesses. Analysis from leading consultants demonstrates the astounding nature of the market projections included within the planning application – projections which rely on cherrypicked data and ignore historical growth.

“We ask that this application receives proper scrutiny, and takes into consideration the concerns of local people and business, especially given the risks it poses to Manchester’s culture, economy and environment.”

Oak View Group, unsurprisingly, disputes allegations of cherrypicking data, and is also wielding economic analysis of its own, in the form of an economic impact assessment by PWC and Ekosgen which concludes the new arena would contribute up to £1.5 billion of new economic activity over the 20 years from opening (planned for 2023) – and that city-centre businesses would benefit from an estimated 85% of all new arena-related spending.

“There is no demand for a second major venue in Manchester”

Mark Donnelly, COO of OVG International, says Manchester, a European live music capital, is failing to capitalise on its musical heritage, and that a new arena would grow the local market, as has happened in other large cities.

“Manchester is a city with a proud music and sporting history and a huge appetite for live entertainment, but it’s currently losing market share in the national live entertainment industry,” he comments. “A new venue, with world-leading technology, would help to grow the overall entertainment market within Manchester and attract a wider range of larger and more impressive live events to the city.

“Manchester has developed a thriving tourism and entertainment market, and we are completely confident that a new venue at Eastlands would happily co-exist with the current arena, as well as other venues in the city centre and across the region. Economic analysis submitted as part of our application shows that a new arena would bring an additional £36m per year in direct annual local spending and at least £1.3bn of additional economic activity from two arenas over 20 years. City-centre business would account for 85% of visitor expenditure from two arenas, significantly increasing jobs and economic activity compared to the current position.

“We look forward to reviewing the existing arena’s full analysis, as the little released so far seems to paint a negative view of the market, and the city’s position within it, which we and expert industry analysts simply do not recognise. The live entertainment industry is supportive of our proposals, as they foresee ongoing growth in the market post-Covid, with a great opportunity for Manchester to play a leading role in that.”

Andrew Coles, director of real assets at Aviva Investors, which describes itself as “one of the largest investors in Manchester’s built environment”, is supportive of the ASM-led objection, saying further economic assessment is needed before proceeding.

Because of coronavirus, he says, “the situation in the city centre and its businesses is vastly different to what it was at the start of this year”, he says. “‘The basis of the Eastlands arena application was written before the full scale of the economic impact on Manchester was understood. We would urge the relevant authorities to carefully consider how to ensure the vitality and viability of the city centre, which reflects the economic reality on the ground.

“As such, we believe a full retail and leisure impact assessment of a scheme of this size is needed.”

Donnelly, however, says the new arena is just what the city needs to get back on its feet, creating in excess of 3,000 jobs during construction – which could begin later this year, pending approval of the planning application – alone.

“Other major UK cities are thriving with two or more arenas, and we are so confident in Manchester’s potential that we are willing to commit £350 million entirely privately funded investment to the city, creating 3,350 jobs during the construction phase and a further 1,000 once open in 2023,” he concludes.

“We want to partner with businesses and the wider community in Manchester and, following a successful planning process, OVG could be onsite as early as October, beginning to create new construction jobs straight away – vital to help the region recover economically from the current crisis.”