Beyond Rhetoric: BAME execs on boosting diversity in live 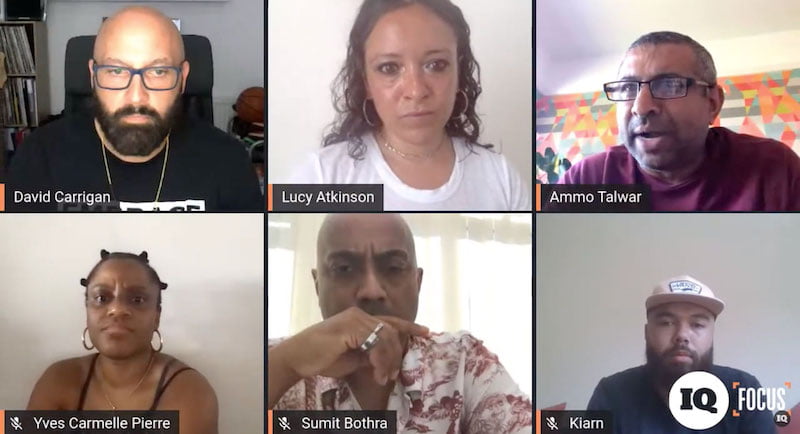 The latest IQ Focus virtual panel, Beyond Rhetoric: Race in Live Music, looked at the lack of racial diversity in the live music business, as well as practical steps the industry can take to begin turning the tide.


Talwar, who leads UK Music’s diversity and equality taskforce, said that while the industry’s front-facing components are hugely diverse, its workforce is not.

In London, for example, over 40% of the population are non-white, he said, compared to around 18% in the UK music industry. At the executive level, he added, companies are still overwhelmingly staffed by “middle-aged, white heterosexual males”.

Comparing her own path into the business, Atkinson said she speaks to a lot of white men “who say they just kind of fell into this job, and that hasn’t been my experience at all. Even now, I still feel like I have to fight to get taken seriously as an agent.”

“A lot of conversations get really overcomplicated, but there are some very simple things you can do”

On the artist side, Pierre pointed out that lot of artists aren’t allowed to “live” in traditionally white spaces – they have to start in a black/“urban” genre and then go pop or rock when they are already established. “We have to acknowledge that these artists exist and that there’s space for them,” she said.

Looking at practical measures to promote a more representative industry, Atkinson said: “A lot of conversations get really overcomplicated, but there are some very simple things you can do”: for example, the ‘Rooney rule’ in the NFL that requires at least one ethnic-minority candidate be interviewed for a job.

Speaking from a promoter’s point of view, Eslami described another simple change he has made on his shows – which, while not costing his employer any more, allows for greater investment in ethnic minority run businesses. “Every show we have has a budget, and one of those costs is catering,” he explained. “[I asked] why do we spend all our budget in supermarkets, when there are so many other caterers our there?

“It’s about looking at how we change the cash flow for these shows, whether it’s in catering, marketing or elsewhere.”

Pierre said it’s up to everyone in the industry to hold their own employers accountable when it comes to employing a diverse workforce.

“Accountability is up to everyone in that organisation. We have to make sure that the companies we’re working for live up to those standards when it comes to racial diversity and gender equality,” she explained. “A lot of the time nothing gets done because you think someone else is doing it.

“Accountability is up to everyone in that organisation”

“If I want to see the change, I have to be part of that change. I have to hold my colleagues, and my bosses and partners, accountable.”

Bothra said ATC is looking at changes it can make to hiring processes to promote greater diversity.  “For us as a management company, for example, we have to be aware that it’s incumbent on us to look in new places to find people,” he explained. “We can’t just go to the same recruitment agency, the same school, and do the usual thing, because that’s not going to make any difference at all.”

“The professionals are out there,” added Talwar. “We’re just not looking in the right places.”

“There are tons of kids who don’t know that an agent exists, or that there’s a management position, or a social media aspect of this,” said Pierre, emphasising the importance of getting the word out about the live industry to underrepresented groups.

“I think we have to expose people to these things, so they can understand there’s a whole workforce behind these artists and something for them to do beyond just being an artist or a producer or writer.”

“The professionals are out there. We’re just not looking in the right places”

“Before I started at Metropolis I didn’t even know a promoter was a job,” added Eslami. His advice, he said, is that “it doesn’t take long” to offer advice and mentorship to young people from disadvantaged groups. “There are 365 days in a year, and if you spare one or two” of them you can really make a difference, he said.

While the current zeitgeist feels like a “watershed moment” for diversity, real change needs to be about more than words – it’s got to be a “root-and-branch approach” that tackles “systemic” issues, said Talwar.

He added that he’s “just as interested in the block in the middle” – the one that stops industry professionals of colour attaining leadership positions – as the one that stops ethnic minorities getting into live music in the first place. “Where are the next CEOs, the next chairmen?” he asked.

Carrigan concluded by saying the conversation had been “a long time coming” and expressed his wish that debate will go on in future. “These conversations about race in the live music industry are not common, which illustrates the need to continue the conversation,” he explained.

Given the importance of the conversation continuing, future IQ Focus panels will revisit the topic in the weeks ahead. In the meantime, you can watch back yesterday’s session on YouTube or Facebook now.