The Agency Business 3.0 looked at the push for greater inclusion in live music, as well as the role of the agent amid the rise of livestreaming and virtual shows 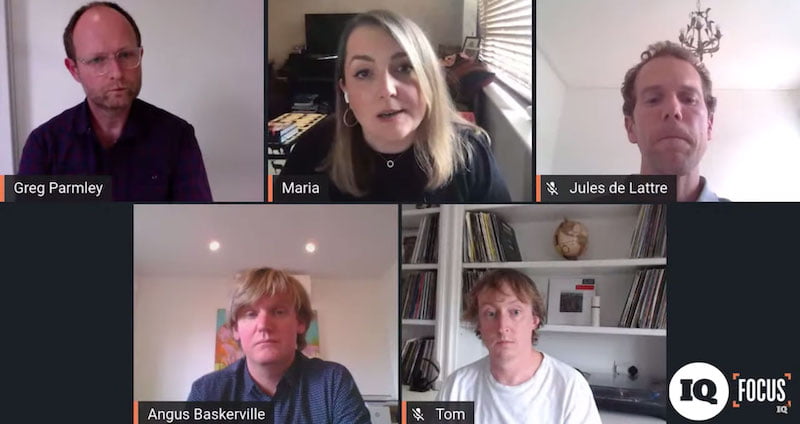 The evolving role of the booking agent, the increasingly crowded 2021 circuit, and the agency sector’s shaky record on diversity were among the topics discussed during yesterday’s IQ Focus session, The Agency Business 3.0.

Hosted by ILMC MD Greg Parmley, the session – the latest in IQ’s Focus virtual panel series – checked in with CAA’s Maria May, UTA’s Jules de Lattre, Paradigm’s Tom Schroeder and 13 Artists’ Angus Baskerville to see how the business has changed, three months after the world went into lockdown.

“It’s been proper bonkers these past few months,” said Schroeder, who recalled how, back “in February, we were saying, ‘We’re going we need 20 laptops’ [for people to work from home], and other people going, ‘You’re mad; it’s the flu!’

Despite the speed at which circumstances changed – as well as ongoing uncertainty about when live music will return in force – Schroeder said, as an agent, he’s never felt a more essential part of the music industry ecosystem.

“The majors [labels] have seen they cannot get traction for an artist without shows,” he explained. “I spent 20 years telling people that – I didn’t know if it was true, but now I know it’s true. Gigs are an absolutely integral part of the music food chain. I feel more valuable than I have before.”

May said a “day doesn’t go by” when she doesn’t receive an offer for things like “livestreamed shows, or pre-recorded sets being put into a virtual universe”, a la Travis Scott in Fortnite.

“It’s a good time for us to realise that we’ve been really, really rubbish at this, and we’re going to do something about it”

“As agents we all need to be across this massively,” she explained. “Nothing will replace a live music experience, ever – but with most of the shows that are successful, people can’t go to them, as they sell out too quickly. So this [livestreaming] is something that will become in standard in future.”

“The idea of our role as advisors, as consultants, as having expertise in the live space and in lots of different areas, I think gives us a reason to exist more so than ever,” he continued. “I think it’s that dimension, rather than just booking tours and taking commission, that is key.”

The growth of virtual concerts, he added, “has really forced us to innovate, and think creatively about ‘What can we learn here?’”

“I think over the next few months we’re going to see increased production values, and people offering opportunities for artists to perform,” predicted Baskerville, “and perhaps monetise, in a meaningful way, some of those performances. We’re involved in a couple of acts playing at Alexandra Palace this week at a streaming event the Wireless people are putting together, and the production values are incredible…

“In the long term, hopefully [these virtual shows] something we can learn from, and use those skills in future.”

Following the events of Black Out Tuesday and the launch of #TheShowMustBePaused, talk turned to racial diversity in the live music industry and (given the panel’s make-up) the agency business specifically.

“CAA are very publicly out there and actively working hard… we’re looking at how we recruit, how we employ, how we bring people up, how we create departments and how we bring focus and light to these issues,” said May. “Last week was a great moment for the creative industries to step back, take stock and realise how much work there is to do in this area.”

“I think agencies throughout the UK are terrible at this, and that includes my company,” opined Schroeder, taking a different tack to May. “There just isn’t the representation there, and we have to look at why.

“What we need are some tangible results. One of the most startling bits from last week [Black Out Tuesday] was the brands which put a black square up, saying, ‘We’re going have a think’, and getting called out on it…

“I hated the Insta-moment of the whole thing, so I’m not going to use this opportunity to say what we’re doing at Paradigm. I’ll come back in a year and tell you then. It’s a good time for us to realise that we’ve been really, really rubbish at this, and we’re going to do something about it.”

“I think there’s a risk that the emotion and severity of last few weeks could lead to a rush to respond that isn’t genuine,” added de Lattre, who said the industry must be asking itself, “How can we do this in a genuine, long-lasting way?

“We’re going to be scrutinised for how well we’ve done in the coming weeks and months. The honesty and the dialogue so far is the best we’ve done, but there’s so much more to achieve. It’s for us to prove ourselves from here.”

Looking to 2021, May said it’s going to be challenge to provide space for new acts on already crammed festival bills, with many events choosing to re-book the majority of their 2020 acts.

“With the new acts coming through, it’s going to be difficult, because for the most part we’ve moved everyone into 2021,” she explained.

“There is a need for an adjustment,” said Schroeder. “In 2021 we all desperately need a super successful summer, to make money, for people to survive, for people get their jobs back, and for punters to have a wonderful experience.”

“What Covid will have done is put a pause, if not a stop, on some of those silly deals” from before the crisis, he added.

“We all need to work together very closely so we know clearly on what basis we’re confirming events,” added Baskerville. “But there’s an appetite among agents, managers and promoters to work it all out. […] It’s important that the events which happen next year happen well; if we all support them and work together we’ll be able to achieve that.”

More than anything, concluded de Lattre, the coronavirus has ushered in a period of “reflecting, not just about our work lives, but about lives in general, and there’s an incredible amount of change to come.

“It’s been an absolutely unbelievable year, charged with the promise of change and a more collaborative spirit within the business, and with real potential for change in diversity and inclusion. These are all incredible things that I don’t think anyone could have dreamt of really happening.

“So if we can turn a positive out of all the challenges and the anguish, I think we’ll have done well from this year.”