2019 Under the Microscope: Who was on top in electronic music?

With the industry at a halt, Viberate is looking back at 2019 and telling the story of the year in data. First up: the electronic music sector

Anybody working in the live music industry today will tell you that 2020 came out swinging, with the colossal price tag of the coronavirus pandemic rising steeply every day.

As the industry came to a halt following the cancellations of gigs and festivals all over the world, Viberate looked back on brighter days and crunched the numbers behind the top 100 DJs across all genres to see who’s behind the mixing board.

We could just say that the average top DJ was a 34-year-old EDM-playing American who gained the highest number of new followers on YouTube. This, however, doesn’t hit all the right notes, as the wider picture is much more colourful. So what else is there?

As a global music platform connecting over half a million artists and around 5,000 festivals, Viberate analysed popularity across numerous social and streaming services in the past year in order to put the top 100 DJs in the world under the microscope.

Using similar data gymnastics, Viberate populated the artist-specific categories for the International Dance Music Awards, which are traditionally presented at the Winter Music Conference in Miami, but remained in the digital realm this year.

This review provides a fuller reflection of the industry…

1. The mainstream and the underground: Who’s winning the genre game? 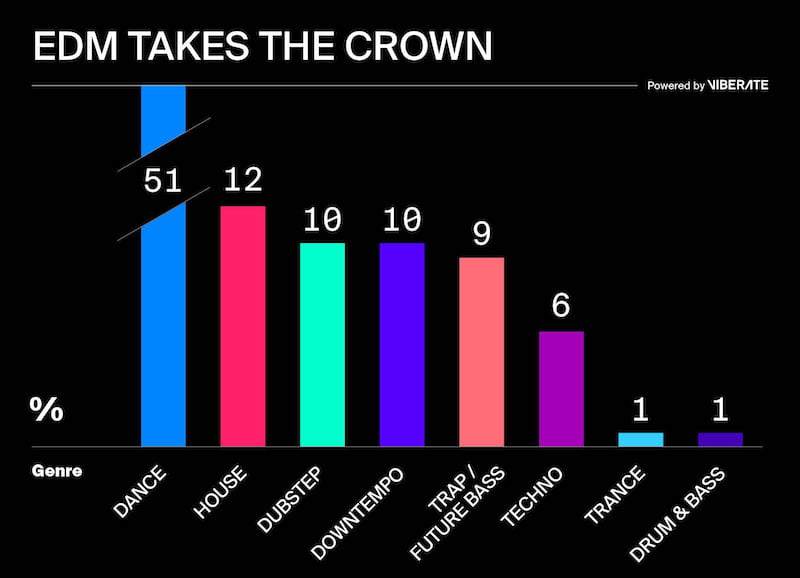 The undisputed winner is dance, as more than a half of the top 100 DJs have it as their main subgenre. At the end of the day, mainstream popularity brings the numbers, so there’s no curveball to be expected here.

Next is house, which is represented all around the world, and then dubstep, downtempo and trap/future bass, which are the most popular in English-speaking countries. In dubstep, eight out of ten DJs represented are from North America, while one is from the UK and one is Israeli. In trap/future bass, six out of nine DJs are from North America, and one is Australian.

Techno, however, is Europe-based, as all representatives (except the one Siberian in the mix) are European. Trance and drum and bass remain more underground, but have one strong representative each, both Dutch: Armin van Buuren and the Noisia trio, who are on their farewell tour in 2020.

2. Building a fan base: The strongest channels 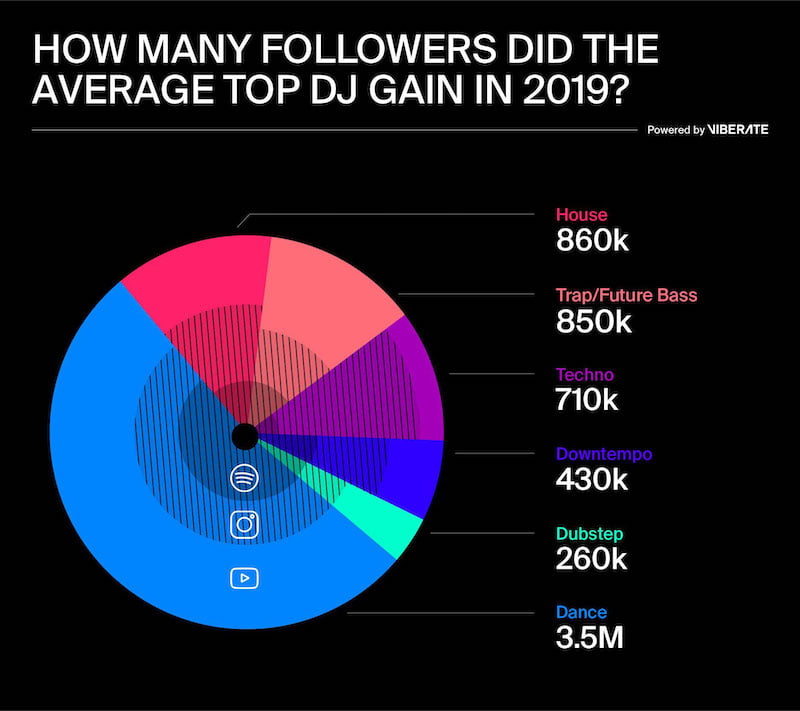 Taking a closer look at the numbers of new followers on Spotify, Instagram and YouTube per genre, it’s clear that the average dance DJ is the winner of 2019. Of the whopping 3.5m new followers on average, 43% are YouTube subscribers, 35% were gained on Spotify and 22% on Instagram.

Next is house (860k new followers), with the growth per channel more evenly distributed. Trap/future bass is at its heels, with 850k new followers, almost half of them on YouTube (47%). The average Techno winner of the year got 710k new followers, most of them (72%) on Instagram – not surprising, as neither YouTube nor Spotify are the main outlets for techno artists.

3. The demographics behind the superstars 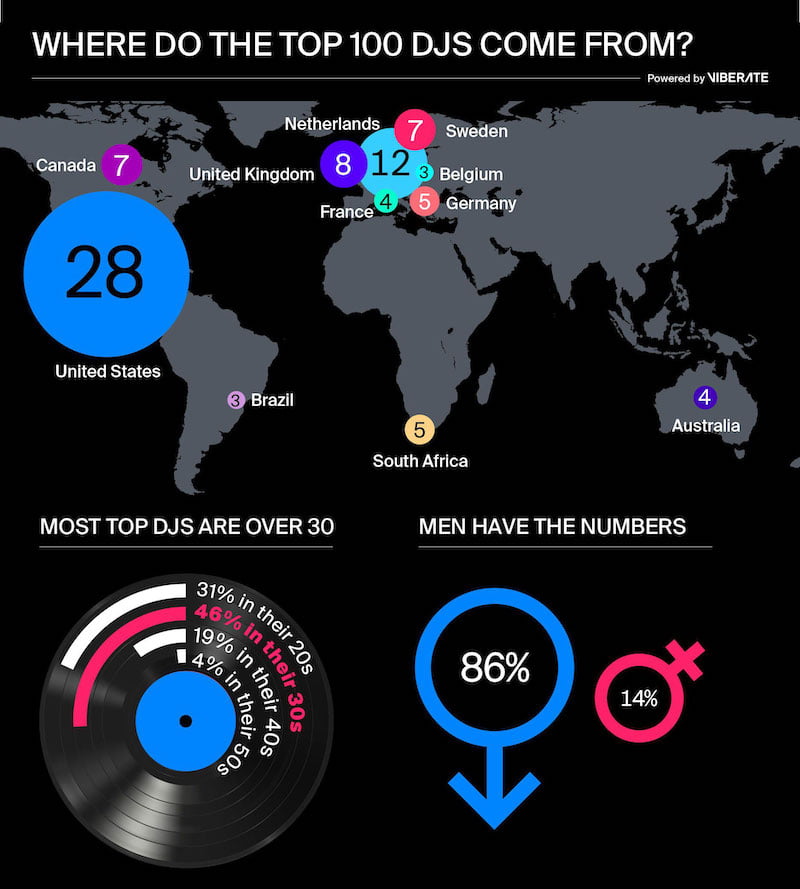 The countries that have given us the most Top DJs are the US and the Netherlands, with 28 and 12, respectively. While Marshmello, Skrillex, the Chainsmokers and Steve Aoki, representing the US, have become household names, the picture changes if we consider the population of both countries.

The Netherlands is around eight times more populated with top DJs such as Martin Garrix, R3hab and Oliver Heldens – there must be something in the air. And if we compare Europe and North America as a whole, 46 of the top 100 DJs come from the Old Continent, and 35 from the US and Canada.

How old are they? Almost half of the DJs are in their 30s, and 4% of them are still going strong in their fifties.

And where are the ladies? In electronic music in general, men have the numbers, but in techno the situation is level at the top, as the wave of successful women is taking the lead: Charlotte de Witte, Amelie Lens, Nina Kraviz and Deborah De Luca are challenging the status quo. The sister duo Krewella has been rocking EDM, and you can’t miss Alison Wonderland and REZZ in bass music.

The fastest rising stars were Peggy Gou, Charlotte de Witte and Amelie Lens, who each at least doubled the number of followers on all three analysed channels and made 2019 their year. Even though the world of electronic music might still seem like a boys’ club, there are strong players fighting to change the stereotypical figure behind a mixing board.

To stay informed about postponed and cancelled festivals, Viberate has created the website Sick Festivals, where you can follow current information.

At the moment, the coronavirus pandemic has taken its toll on more than 550 festivals – find out more at SickFestivals.com.