To mark Tinnitus Week 2020, artist and producer Rupert Brown writes on living with tinnitus and explains why he created T-Minus to help fellow sufferers take control 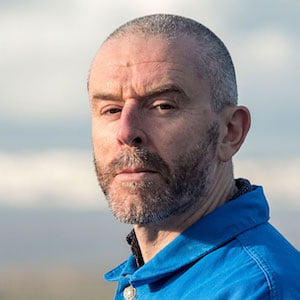 My name is Rupert Brown. I am a musician, producer and drum teacher – and, more importantly, a tinnitus sufferer.

Sadly, my story with tinnitus starts at the age of 22. In 1991, as a young drummer, I was honoured to be asked to play a series of gigs with Roy Ayers (an American jazz legend vibraphonist) at Ronnie Scott’s Jazz Club. It was going so well that Roy and his manager asked me to continue the tour into America.

In the second week of the Ronnie Scott’s shows, I came off stage and I noticed a huge problem with the hearing in my left ear. As I left the club to find my car, I was struck down with this terrible realisation that I was experiencing the sudden onset of tinnitus. I was profoundly deaf in my ear and was left with eight different sounds and noises of tones, screams, bells and thunder. I shall endeavour to describe this awful audiological tragedy.

If one can imagine being alone on a lighthouse in the middle of the cold winter’s dark ocean, with bells striking a clock tower at the top of the building, waves crashing around me, wind howling and gusting uncontrollably. The knocking sounds of metal rigging hitting the flag pole and birds making screeching noises as they summon the energy to leave the desolate platform on which I am forced to stay.

The question I kept asking was, ‘Would I ever be able to make friends and have a relationship with that person (me) ever again?’ The terrifying isolation that I felt was instantaneous and I knew straight away that this was going to change my life. My new sonic landscape had changed immeasurably. My world spiralled so quickly after a short time with tinnitus. That night when I got home, I wrote in pen on the wall above my bed, “PLEASE GOD MAKE THIS GO AWAY”. (I’m not even a religious man!)

Despite this experience, I didn’t give up with the last week of the Roy Ayers residency. I carried on performing concerts twice nightly. I’m fairly certain that this made my problem permanent, but I do not regret any of my decisions and carry an immense amount of pride that I was able to find the strength in me to continue the gig. Unfortunately, doing so also meant I was unable to tour the USA, as I knew I had to seek professional help.

I wrote in pen on the wall above my bed, “PLEASE GOD MAKE THIS GO AWAY”

After seeing my doctor, who had no real help or advice for me, I had to wait eight months to get an appointment with an ENT specialist at the local hospital. While I was there, I had one of those special moments. I was in the waiting room next to the doctor. I could hear him on the phone and will never forget what he was saying…

“Okay, I’ll just get rid of this one quickly and we’ll see each other on the golf course.”

He was talking about me. When I spoke with the surgeon, he asked me one question: “Do you need to hear the music when you are playing your instrument?” I almost couldn’t reply. “Of course,” I said back to him. “In that case, you will have to stop playing,” the doctor replied.

For me, that was the turning point. Although there was so much wrong with the consultant’s conclusions, it gave me the strength to get to the bottom of this by myself, as I could see that I wasn’t going to get any help.

Although it was unbearable to start with, I managed to find solace in an innocuous little Toshiba tape cassette player. I found that if I pressed down play and record and pause at the same time, I could get this wonderful hissy white noise sound. After using this day and night, and even taking it on tour with me (much to the amusement of the airport staff and security), I was able to slowly take back control of my life again.

The eight tinnitus sounds started to become six, and then five, four, three and two, and I was finally left with one hissy sound which I could cope with, and I was comfortable to live with. I was able to completely get my musical life back on track and started to embark on my career again.

Creating the music for T-Minus has been an amazing experience – and at times, it’s also been incredibly scary, dark and emotional for me

I went on to play with some wonderful artists: Nigel Kennedy (tours and album), Cher (album), The Lighthouse Family (albums), Darryl Hall (album) and Robbie Robertson (album), to name but a few. Plus, I even ran a community Samba band with 111 members in it.

A few years down the line, I was touring with my band and the worst thing that could possibly happen to me occurred one night. I had the tinnitus injury all over again. This time it felt worse; and as I was older with more experience, I had more knowledge as to the extent and severity of my symptoms.

Going to the doctors at this time was poorly judged (by me), as I was told I had to have ear wax removed. A standard procedure for most people, but for me it was a total nightmare. The nurse was not experienced enough and didn’t take into account my past hearing issues. Now my problems were becoming insurmountable. The condition I had now – on top of the raging tinnitus – was called hyperacusis.

My tinnitus symptoms were so bad that I could not leave my house for months. All sounds had become excruciating for me, which as you can imagine, is an extraordinary problem for a musician.

This time (and armed with a recording studio and my knowledge from the Toshiba tape deck), I started to look into music and sound to get to the route of my tinnitus nightmare. I would go out for walks late at night and bathe myself with the distant sounds of nature, the sea, cars and other night-time ambiances. I knew I had to desensitise myself with these sounds.

I then started to put these sounds together and create tinnitus ‘mind environments’ in my studio. I have spent more than a year and a half making the most unique tinnitus sound library out there.

My tinnitus symptoms were so bad that I could not leave my house for months.

What I have learnt is that tinnitus sufferers are capable of helping ourselves! Creating the music for T-Minus has been an amazing experience – and at times, it’s also been incredibly scary, dark and emotional for me; it has opened up very deep wounds and sensitivities surrounding my own issues.

To find these sounds I would go out with a portable recorder to capture my natural found sounds. I would take these back to my studio to EQ these frequencies and blend multiple recordings with musical dialogue and occasionally adding subtle rhythms to create ‘mind environments’.

The reason for adding the music and putting various different waveforms together was to help the individual with the emotional wellbeing and good positive feeling towards the tinnitus-masking sounds: ie simple sounds like an old car indicator and the sound of a Citroen 2CV tyre turning slowly into a gravel road were emotional triggers from my own past that symbolised safety and feeling cared for, and the train music felt like I was going back to a time where I could remember grandparents and happy positive feelings.

This subject matter explores the idea of natural and unnatural elements working together in harmony to create a strange symbiosis that produces a uniquely personal journey into the mind and enables me to work with two very different sound environments. The challenge I set myself was to believe that I could somehow create ‘harmony’ and ‘beauty’ through conflict.

Scary and harrowing, I know. But as time softens those old tinnitus sounds via my own type of sound therapies, I’m able to reflect upon this experience and use these strange, mystical noises to create a new and exciting canvas of mind environments. These have greatly helped the over-stimulation of my mind by delivering tinnitus back to tinnitus, thus eventually dulling and quietening the relentless and maddening tones.

Rupert Brown is a musician, producer, music tutor and the developer of T-Minus, a free app that aims to help millions take back control of their tinnitus.