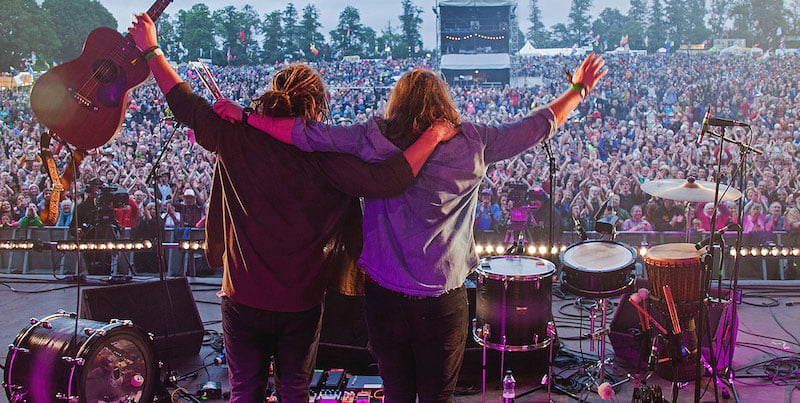 Evolving out of an annual reunion concert featuring the myriad former members of the godfathers of British folk rock, Fairport Convention, airport’s Cropredy Convention has grown to become one of the UK’s best-loved mid-sized festivals, attracting some 20,000 people annually for three days of music in the village of Cropredy in Oxfordshire.

Having taken place annually since 1980, it also holds the distinction of being the UK’s longest continuously running music festival – while Glastonbury and Reading Festivals have been around longer, neither have taken place every year (Glastonbury has its regular ‘fallow’ years, while no Reading Festival was held between 1984 and 1985).

As Fairport Convention embark on their 2020 ‘Wintour’ of the UK, IQ caught up with Fairport’s bassist, Dave Pegg, and Cropredy festival director Gareth Williams to talk fans, folk, pricing, competition, cruises and much more…

IQ: Fairport’s Cropredy Convention is officially the longest-running music festival in the UK. What’s your secret?
Dave Pegg: I think our longevity as a festival is due to our choice of acts. We believe that if we like the performers we are booking, then our festivalgoers will too. We always try to have an eclectic mix of folk, rock, reggae, prog and young bands to appeal to most of our audience. We attract three generations, so Cropredy has a real family vibe.

There are more festivals in the UK than ever before. Have you been feeling the pressure from rival events?
DP: Yes, there are a lot. To be honest, I don’t understand how many of them survive, with the huge costs of staging them.

I have always been aware of them springing up and, in some cases, rapidly faltering. But thanks to the uniqueness of our event and the loyalty of our fan base, I am happy to say we haven’t really been affected by the competition, despite several biggish events in our neck of the woods.

In terms of booking the other acts, how has that process changed over the years? We hear a lot about artist fees making certain festivals uneconomic to put on…
Gareth Williams: The cost of headliners has gone through the roof in recent years, with the ‘majors’ being signed up to exclusivity deals by the larger festival conglomerates. We realise now, like many other medium-sized festivals, it is futile to try and compete. We have to watch the pennies, and with the increase in costs comes greater risk.

Our line-up this year has gone down very well with our regular attendees, and that is the market we should be concentrating on for now. Luckily, we have a good reputation and have always striven to make visiting bands feel welcome.

“Thanks to the uniqueness of our event and the loyalty of our fan base, we haven’t really been affected by competition”

You’ve been in and out of Fairport over the years. What keeps you coming back, and what makes the group so special?
DP: Fairport is very special to me. It is a lifetime’s work and the band are very much family. Fairport has had over two dozen band members in total, but this current line-up has been together for 22 years.

We still love treading the boards and making new music. Our latest album, Shuffle and Go, is as good as anything we have recorded in the past.

What have you got up your sleeves for Fairport’s performance this year? It’s the 50th anniversary of your seminal 1970 album, Full House…
DP: This year, 2020, is very special for me, as it is also my 50th anniversary in the band.

For Cropredy this year, we have [former band members] Richard Thompson and Dave Mattacks coming over from the USA to join us on stage. On the festival’s Saturday evening (15 August), the Full House line-up of Richard, Dave, Simon Nicol and me will be joined by Chris Leslie on fiddle to play the whole album.

Looking ahead to this summer, how are things shaping up for the festival so far? Does it look as if it’s going to be a good year in terms of numbers?
GW: It’s too early to say, but so far the signs are very encouraging.

However there’ll be no resting on our laurels. We had our full line-up ready in time for tickets going on sale at the beginning of December, and that has certainly helped.

“The cost of headliners has gone through the roof in recent years. … It is futile to try and compete”

How about the tour? Are you excited to get on the road again?
DP: In a word, yes. We keep going ’cos we still love it – and having lots of creditors helps, too!

What does the average Fairport’s Cropredy Convention-goer look like?
DP: You would imagine that the chaps who attend would mostly look like me. Some do, of course, but we also have a much younger contingent because we present great young bands who attract their own following.

Also, the fact that there are three generations of Cropredy regulars makes it hard to describe a typical one.

What do you think of the state of the folk scene currently? Is it in a good place?
DP: The folk scene in the UK has some amazing young musicians. They are so much better as players and performers than I was in my teens.

For example, the opening act we have on our current tour, Smith and Brewer, are great guitarists and songwriters – and there are loads of other fab bands, like the Thumping Tommys, who we are presenting this year at Cropredy.

“Other events might see our single stage as a downside, but for us it helps makes the festival special”

You also do your river cruises in Germany. Who’s idea was that, and what appealed to you about the ‘floating festival’ format?
DP: We are doing two river cruises in June 2020 and 2021, on the Rhine and Danube, respectively. This is a new venture for us and we heard about them from the band Show of Hands, who had such a good time doing theirs. It’s a great chance for us to do something different.

We will entertain for four nights, two of which will be Fairport concerts. Another will be Karaoke Beatles, where we will be the Fab Five, complete with Sgt Pepper outfits, and the audience will be the vocalists. The fourth night we will play swing jazz, with [Fairport band members] Chris Leslie doing magic and Ric Sanders doing stand up.

I would love us to do one of the prog-rock boat cruises that our chums Procol Harum and Martin Barre do. So, if any readers can help get us on one of them, there’s a pint in it for you…

You’ve been staging Cropredy independently for over four decades now. Have you ever had any offers to sell up – and have you ever been tempted
DP: My ex-wife, Christine, and I ran Cropredy from 1980 until 2005, when we split up. There was interest from several parties who wanted to buy the festival, but we thought it better to form a new company [Fairport Convention Ltd] and keep it in Fairport hands.

That way we’ve been able to preserve its longstanding reputation and keep the Cropredy residents on the festival’s side.

Finally, what does the future hold for Fairport’s Cropredy Convention?
GW: The festival is now 41 years old, and we are lucky to have a very loyal contingent who make the journey every year. As long as people still want the festival we’ll continue to provide it. Cropredy is a unique event, what with its single stage; other events might see that as a downside, but for us it helps makes the festival special.

We may not have a hundred bands on over the weekend but we can guarantee each one will be playing to at least 10,000 people no matter how far down the bill they are… and that’s pretty special.