Ahead of TEG’s bushfire benefit show this weekend, the CEOs of TEG, TEG Dainty and TEG Live talk about organising the star-studded event and the "unifying power" of live 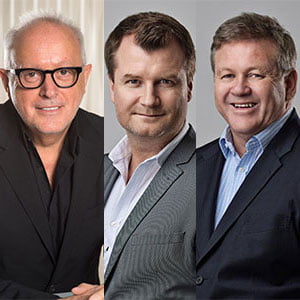 This Sunday the Australian music industry will come together to present its response to the worst bushfire season in living memory – and it promises to be something pretty special.

FIRE FIGHT AUSTRALIA is a nine-and-a-half-hour benefit stadium concert in Sydney featuring a cavalcade of leading international and local acts performing in in front of 75,000 fans, with millions more watching on TV across Australia, New Zealand, the US and the UK.

We hope to raise many millions to aid rural and regional Australia’s short, medium and long-term recovery through the generosity of fans who have bought tickets, merchandise, food and drink and have donated through firefightaustralia.com.

The concert has come together in five short weeks thanks to the creativity and collaborative spirit of our industry’s people. This is the story of how we did it but first, a bit about why.

We are sure you have read about the recent devastation Down Under, caused by sustained drought and intense heat that sparked terrifying wildfires.

Dozens of lives have been lost, thousands of homes and businesses destroyed, thousands of people evacuated, countless animals killed and more than 46 million acres of Australia’s bushland razed. Sydney and Melbourne dwellers had daily reminders of our fellow Aussies’ plight just miles away, in the form of choking smog.

Many of TEG’s staff and their families and friends were affected personally by the bushfires and, like so many others, we were keen to do our bit. In late November, with the bushfire season still in its early throes, we spied the opportunity.

Geoff and Paul had spoken about the idea of a Live Aid-style bushfire benefit. It would feature the very same band who had stolen the show at Wembley in 1985, a little group from England called Queen (now Queen + Adam Lambert).

On Saturday 15th February, Queen + Adam Lambert would be playing ANZ Stadium in Sydney’s Olympic Park as part of their global Rhapsody Tour, promoted by TEG Dainty. They were back to the top of their game and big as ever in the wake of the hit movie Bohemian Rhapsody.

On paper, it seemed we had the infrastructure, the iconic act, and the opportunity – in tragic circumstances – to create something special that could galvanise many other acts to join the bill and make a difference.

Paul made a call to the band’s manager Jim Beach and, to our immense gratitude, they were supportive from the word go. The same was true of Michael Bublé and Alice Cooper, who were also due to be in Australia with TEG Dainty and TEG Live respectively at that time.

It was an ambitious deadline and it would be a massive challenge to add to our non-stop day jobs. But at our final meeting before the holidays TEG’s senior leadership team roared in approval. By Christmas Eve we had snapped up the firefightaustralia.com domain name.

First thing Sunday morning on 5 January, Geoff, Paul and TEG Live managing director Tim McGregor hit the phones to start filling out the bill. The response from the acts and the labels was incredible.

ANZ Stadium made a generous offer to provide us the venue for free the day after Queen + Adam Lambert’s full concert. Our own venue, the Qudos Bank Arena next door could operate as a production staging point and host artist dressing rooms.

We had the infrastructure, the iconic act, and the opportunity – in tragic circumstances – to create something special

On Monday 6 January we appointed a project leader – the highly capable Jared Wright – and together we put together a project leadership team of 13 including executives and staff from TEG Dainty, TEG Live, TEG Corporate and Ticketek, with a total team of more than 25 working around the clock on top of their day jobs.

With the idea now becoming a reality, we felt confident enough to send out a “save the date” media release on Tuesday 7 January and start doing radio, TV and press.

Our message was simple: we wanted to raise as much money as possible towards bushfire relief to help those affected – and to raise spirits in the process through the unifying power of live music. Our ethos: to be inclusive and to communicate clearly with all stakeholder groups.

By the Friday, we had secured most of the 23 wonderful acts that would perform (you can read the full line-up here) and – in another coup – our host, the writer, actor and comedian Celeste Barber, whose record-breaking online appeal had just raised more than AU$50 million (US$34m) towards bushfire relief and won global acclaim.

To determine FIRE FIGHT AUSTRALIA’s recipient organisations and charities we undertook extensive due diligence. All concert ticket profits would go to rural and regional fire services in affected states, the Red Cross Disaster Relief and Recovery Fund and the RSPCA Bushfire Appeal, with the BizRebuild program added later.

At 1pm on 13 January, we went on sale. Tickets were priced at top price of $100. By close of business, we had all but sold out. We were stunned by the fans’ generosity and desire to be involved.

We were inundated with offers from global and local media companies to televise and stream the event. That created an opportunity for a live telecast to raise more money and to allow music fans everywhere to see the concert.

Our message was simple: we wanted to raise as much money as possible towards bushfire relief – and to raise spirits in the process through the unifying power of live music

We settled on one of the leading local free to air television networks, Seven, and the leading subscription television service Foxtel, which also set up global distribution. All donations made through the broadcasts would go to the Foundation for Rural & Regional Renewal’s Fire Fight Fund.

And that’s when the real hard work began…

As anyone who works in live entertainment will know, we have spared you a million details about what it has really taken to make FIRE FIGHT AUSTRALIA happen – and we want to acknowledge Jared Wright and the TEG FIRE FIGHT Team for the long nights and weekends it has taken, and the challenges ahead to deliver the show on the day.

TEG’s thanks are owed to so many who moved so fast to make the event possible, including (deep breath): the 23 artists and bands who gave it their all; the 1,400 workers on the day, including production crew, stagehands, riggers, audio, lighting, video and backline personnel, stage managers, volunteers; the suppliers and drivers of 35 trucks; the providers of numerous hotel rooms and suites; and the 23 media and marketing companies, 22 production companies, eight catering and food and beverage companies and seven car companies that donated staff, products and services.

Shout outs too to NSW Transport for waiving public transport costs for ticket holders, to Cotton On for creating and supplying FIRE FIGHT AUSTRALIA T-Shirts, to Fetch TV for buying tickets for 1000 rural fire fighters to attend the event, to Gildan Brands for supplying those firies with specially designed FIRE FIGHT T-shirts, to those we were not able to accommodate and all those we have not had space to mention.

Just like the generosity and resourcefulness of the live music and entertainment industry, the list goes on and on.

Now, on with the show!