Rock the Boat: How floating festivals are ruling the waves 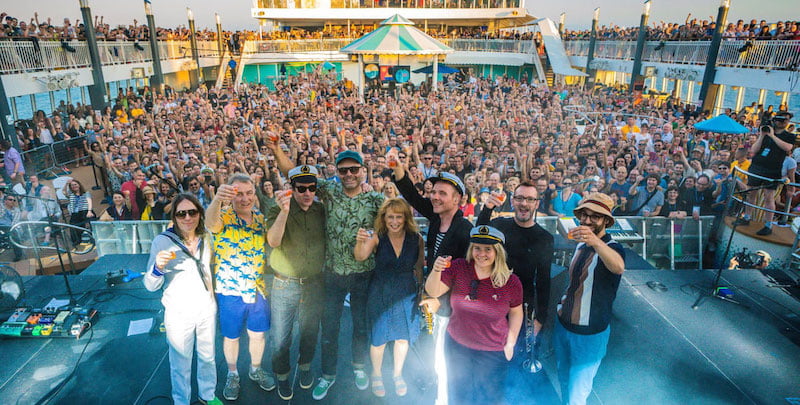 The Boaty Weekender with Belle and Sebastian debuted this summer

As IFF 2019 delegates heard in September, it’s been a mixed bag of a year for traditional music festivals, with many events struggling to repeat the highs of 2018 amid rising costs and increased difficulty booking talent.

Even against this challenging backdrop, however, many events are going from strength to strength – especially those that have developed a strong identity and loyal fan base allowing them to sell tickets even when the vagaries of the touring cycle reduce the pool of available headliners.

But what if – instead of trying to compete with all those other events on land – festival operators took en masse to the water, putting on parties for an army of adventurous Captain Nemo types seeking adventure on the high seas?

As it turns out, a small but growing group of promoters are doing just that, and “it’s not a difficult sell,” says Anthony Diaz, CEO of Sixthman, the US-based granddaddy of music cruise operators, which made its mark in Europe this summer with festivals including Belle and Sebastian’s Boaty Weekender (a co-pro with AEG Presents) and the European debut of Joe Bonamassa’s Keeping the Blues Alive at Sea.

“In the US music cruises are a very common format, and agencies know the value they add to their artists”

Star aboard
“It’s getting easier every day,” Diaz explains. “In the US [floating festivals are] a very common format, and agencies know the value they add to their artists. In Europe, when we started speaking to agents and managers two years ago, it was so new, but now that we’ve done a few, the conversation has changed – they just needed to see it for themselves.”

The appeal, says Iqbal Ameer, CEO of Singapore-based Livescape Group, which operates It’s the Ship (‘Asia’s largest festival at sea’), is that “unlike a landed festival, festivalgoers are able to enjoy various luxuries, such as comfortable cabins just steps away from the stages, 24-hour dining that serves warm food throughout the day and various ship facilities that add convenience to their festival experience, allowing them to focus fully on enjoying their time on board.

“Festivalgoers don’t have to worry about long lines for the restrooms, muddy grounds or having to drive back home. Shipmates can also choose to take naps in between sets and wake up at 3am to continue partying until sunrise.”

Jonathan Blackburn, whose UK-based Floating Festivals company is behind cruises such as ’80s festival Throwback and musical theatre event Stages, says he came across the music cruise model while supplying entertainers for events sailing out of Florida. “I was in and out of various offices in Miami and became aware of how popular themed cruising is in the US,” he explains, and was inspired to launch something similar in Europe.

“If you look at what kind of cruises there are now, there’s everything from music cruises to gay cruises to Bible cruises…”

Buoy bands
Although a “steep learning curve”, Floating Festivals has enjoyed steady growth over the past two years, buoyed by the increasing popularity of both floating festivals and cruises in general.

“The worldwide cruise market is increasing, too,” says Wolfgang Rott, head of press and marketing for leading metal cruise 70,000 Tons of Metal. “If you look at what kind of cruises there are now, there’s everything from music cruises to gay cruises to Bible cruises…”

Broadly speaking, Diaz says, music cruises can be divided into two models: the ‘host’ model, like Sixthman’s successful events with Kiss (the Kiss Kruise), Paramore (Parahoy!) and Kesha (Kesha’s Weird and Wonderful Rainbow Ride), and the ‘festival’ model, “not unlike Coachella or Glastonbury,” which feature upwards of 20 different artists.

With both formats, the majority of artists stay on the ship for the duration of the cruise, Diaz adds: for ‘festivals’ the figure is around 90%, while hosted events edge closer to 100%, with the recent Runaway to Paradise with Jon Bon Jovi cruise the sole outlier so far. “We experimented a bit with Jon,” he explains. “He’d come on and off and do signings, photos, play an acoustic set here and there, but he’d stay in a hotel in the Bahamas. It went well, but it doesn’t change our core model: bringing fans and bands together.”

“These aren’t standard cruises. These are three- or four-night party experiences”

Motley cruise
Also bringing fans and artists together is 70,000 Tons of Metal, a heavy metal cruise that sails from Florida to a Caribbean destination every January. Performers such as Cradle of Filth, Sabaton, Cannibal Corpse, Napalm Death, Meshuggah and Children of Bodom mingle with guests to an extent not seen on other cruises, according to Rott.

“You don’t have any backstage areas – everybody is just a regular customer,” he explains. “So you could go into the breakfast restaurant in the morning and see the guys from Nightwish or Testament, or in the evening see Fear Factory singing Abba on the karaoke… Once fans realise the artists aren’t going away – that they’re going to be on board the whole time and you can sit next to them in the bar or the jacuzzi, or play beer pong together – it takes away the pressure from the exchange. It’s a totally unique experience, and something you don’t really get at a landed festival.”

“These aren’t standard cruises,” continues Blackburn. “These are three- or four-night party experiences. You get all the advantages of being on a cruise but it’s a completely different experience, a really immersive one: you might walk into a lift and there’ll be a pianist in there playing your favourite song, or someone singing karaoke. We want people to go home with memories they’ll keep for a lifetime.”

Continue reading this feature in the digital edition of IQ 86, or subscribe to the magazine here.