The fast-rising Texas rapper, who released her debut album in May, also became the first artist to top the Radar Station chart for a second time 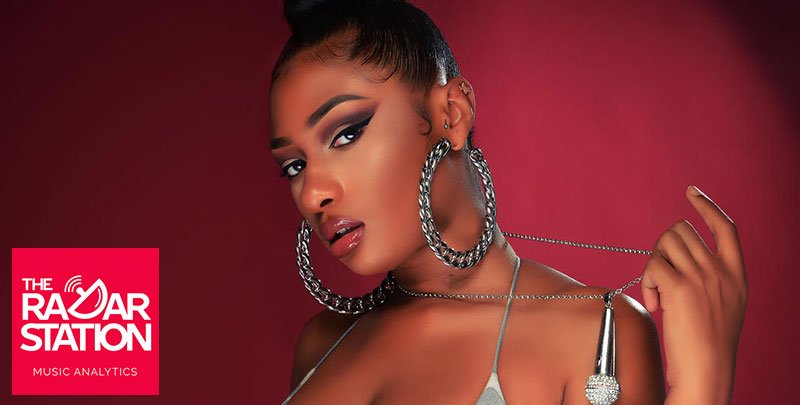 After becoming the first woman to reach the top of the Radar Station chart in April, US rapper Megan thee Stallion last month become the first to successfully defend her title, retaining her crown as the fastest-growing new artist in May.

Born in Houston, Texas, in 1995, Megan thee Stallion (aka Hot Girl Meg, real name Megan Pete) learned to rap from her mother, who performed under the name Holly-Wood. She released her debut single, ‘Like a Stallion’, in 2016, with her first EP, Make it Hot, following in 2017.

There has long been a numbing calculus at work in hip-hop that has largely only afforded oxygen to one female rapper at a time, or at most, two. The internet has exploded that logic, thankfully — Megan Thee Stallion is part of a robust generation of women with wildly differing styles, though many of them share an affinity for sexual frankness. Megan Thee Stallion’s sex raps (“Pimpin,” “Sex Talk” and many more) are raw, luridly detailed and completely unfazed. (And largely in newspaper-unfriendly language.)

On “Fever,” there are only two guests, both men: Juicy J, a pioneer of hip-hop filth, and the up-and-comer DaBaby. Both provide verses that, had they appeared on their own albums, might have seemed unduly crass or cringey. But here, the ridiculous brags seem almost charming — they’re just trying to keep up.

The album also received an 8/10 rating from the notoriously hard-to-please Pitchfork, and has commercially outperformed Megan thee Stallion’s previous releases, including 2018 mixtape Tina Snow, which was streamed more than 11 million times across all platforms.

The Radar Station algorithm calculates the fastest-growing new artists by combining data across a number of online platforms, including Spotify, Facebook, Songkick and Last.fm. For more details about the Radar Station, contact [email protected].

Irish five-piece Fontaines DC, who signed with ATC Live’s Sarah Besnard in Europe last September, held the #2 spot in May, climbing from no 68 the previous month.

In addition to their streaming success, the band are also closing in on the record for the all-time highest number of European Talent Exchange Programme (Etep) festival bookings, with 18 so far in 2019, including Glastonbury, Roskilde and Trnsmt.

In third place are American rapcore act the Fever 333, whose debut album, Strength in Numb333rs, was released in January. A strong early-summer showing on streaming services sees them climb 29 places, from 32, in April.

See the full chart, along with links to artists’ Facebook pages and booking agency details, below.