A £2m, 465-speaker d&b audiotechnik loudspeaker system aims to "futureproof the building" as the Royal Albert Hall heads towards its 150th birthday 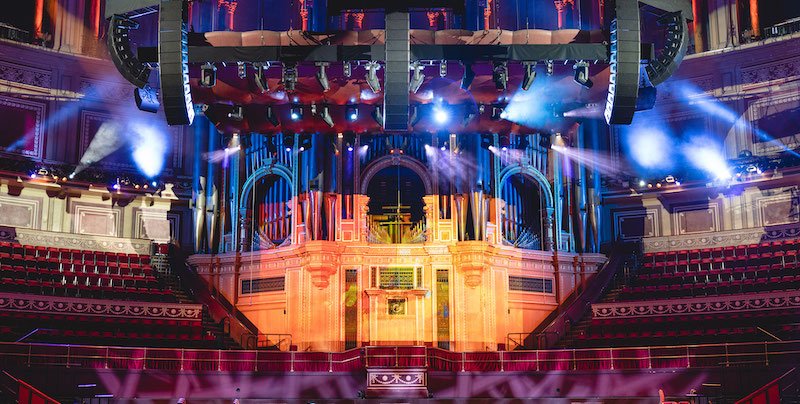 The main array hangs above the RAH's stage

The Royal Albert Hall today took the wraps off its new £2 million sound system – the largest loudspeaker installation in a single room, and one designed to futureproof the iconic London venue’s sound requirements for the next 150 years.

At a launch event at the 5,544-capacity Victorian arena this morning, Royal Albert Hall (RAH) chief executive Craig Hassall revealed the RAH hosted a record-breaking 401 shows in its main auditorium alone last year, cementing its status as the “world’s busiest venue” by number of events.

While the venue opened in 1871, and is named in memory of Prince Albert, the late husband of Queen Victoria – it recently established a 150th anniversary committee chaired by UTA’s Neil Warnock, in preparation for its birthday plans in 2021 – Hassall said the hall is “not a museum, or a mausoleum, or a monument; we’re a venue”, and the forward-thinking sound install is a reflection of that ethos.

Costing over £2m, the project is the biggest improvement to the venue’s sound since the installation of its acoustic ‘mushrooms’ 50 years ago, in 1969. From conception to installation, the audio overhaul took 693 days of labour, with the speakers themselves installed overnight over the course of six months last year. “It didn’t interrupt a single show,” said Hassall, with the hall staying open the entire time.

Steve Jones of manufacturer d&b audiotechnik, whose speakers were used in the 465-box installation, comments: “The Royal Albert Hall presents a sound system designer with some of the most unique geometry in the world, [so] it was essential that the final audio system design delivered a significant improvement to the amplified sound in this venue.

“Using the latest 3D modelling and simulation techniques from leading acousticians Sandy Brown, we were able to pinpoint exactly how, where and what speakers we needed to install, maximising the clarity, intelligibility and musicality that the audience expect from a world-class venue.

“Audiences can now expect a level of audio quality and consistency across all seats which has never before been achievable.”

The new system comprises a main hang of line arrays from the grade-I listed building’s roof, along with smaller speakers in every box and stall, eliminates the “mushy sound” caused by firing the audio from the stage up into the higher seats, said Jones, as well as the RAH’s infamous echo, which persisted to some extent even after the mushrooms were installed. (“In the old days, they used to say that the hall offered value for money because you’d get to hear every concert twice,” joked Hassell.)

“Kylie Minogue, Take That, Frank Sinatra – these are just some of the incredible artists who have played the hall, and, like them, the hall constantly has to challenge perceptions and reinvent itself for modern audiences,” says Hassell in a statement announcing the d&b system’s launch.

“This investment is about more than just updating the sound system – it’s about futureproofing the building as we approach our 150th anniversary in 2021 so that it is fit for another 150 years.”