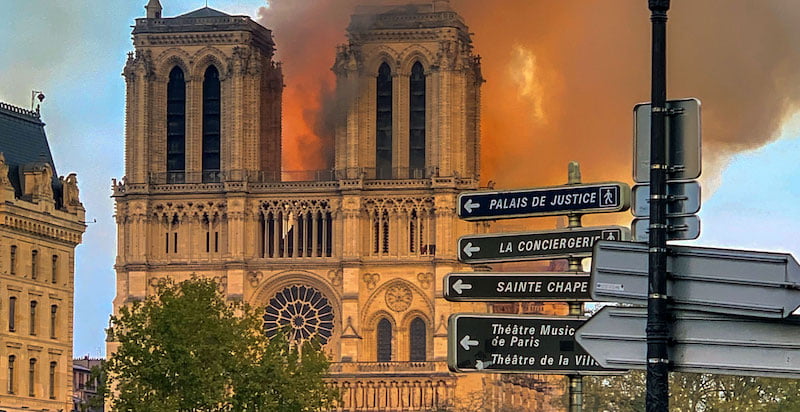 Notre-Dame was under renovation at the time of the fire

Billionaires François-Henri Pinault, president of investment company Groupe Artémis, and Bernard Arnault, chairman and CEO of luxury-goods conglomerate LVMH, have respectively promised donations of €100 million and €200m, kicking off a wave of corporate giving in response to Macron’s launch of a national subscription to rebuild Notre-Dame.

“The partial destruction of Notre Dame is an unqualified tragedy”

“The Arnault family and the LVMH group, in solidarity with this national tragedy, are committed to assist with the reconstruction of this extraordinary cathedral, symbol of France, its heritage and its unity,” reads a statement from LVMH, which adds that “all its teams – including creative, architectural and financial specialists” are at the disposal of the state “to help with the long work of reconstruction and fundraising”.

Other donors include IT services firm Capgemini, which has promised €1m, property developer Groupe Duval, which has pledged an unspecified amount, and construction company Vinci, majority owner of the 80,000-cap. Stade de France, which has also given an undisclosed sum.

In a statement, Vinci suggested the French construction industry should “join forces to rebuild Notre-Dame in an industry wide skills sponsorship drive, possibly led by the Fondation du Patrimoine (French Heritage Foundation), so as to begin work and restore Paris’s cathedral as rapidly as possible.

“Vinci is naturally intent on contributing to the national fundraiser and asking its employees to do likewise, assisting Monuments Historiques architects when they assess the requirements, and taking part in the reconstruction if authorities deem its contribution useful.”

“The partial destruction of Notre-Dame is an unqualified tragedy,” the company adds. “The 13th-century wooden beams holding up the roof will never be replaced. But the part of Notre-Dame that has survived the fire must be safeguarded. Then, as the French president has announced, the cathedral must rise again.”

No cause has yet been established for the fire that started just before 7pm local time yesterday (15 April) and ripped through Notre-Dame for more than 12 hours. According to Le Monde, the 13th-century Gothic cathedral’s spire and roof collapsed, and considerable damage was caused to the interior, upper walls and windows, as well as numerous works of art and its world-famous pipe organs.

According to the Independent, Notre-Dame is by far by the most-visited tourist attraction in France (itself the most popular tourist destination on Earth), and the disaster is expected to have a significant impact on visitor numbers in Paris.

Announcing the fundraising effort to restore the church to its former glory, Macron – standing in front of the still-burning building yesterday – told reporters: “What happened tonight in Paris, in this cathedral, is a terrible event. […] “Notre-Dame is our history, our literature, part of our psyche, the place of all our great events, our epidemics, our wars, our liberations – the epicentre of our lives.

“Notre-Dame is burning, and I know the sadness and this tremor felt by so many fellow French people. But tonight, I’d like to speak of hope too.

“Let’s be proud, because we built this cathedral more than 800 years ago, we’ve built it and, throughout the centuries, let it grow and improved it. So I solemnly say tonight: we will rebuild it together.”