The sharing of threat information and best practice between all stakeholders is crucial to protecting live events in the years ahead, heard delegates at the second E3S 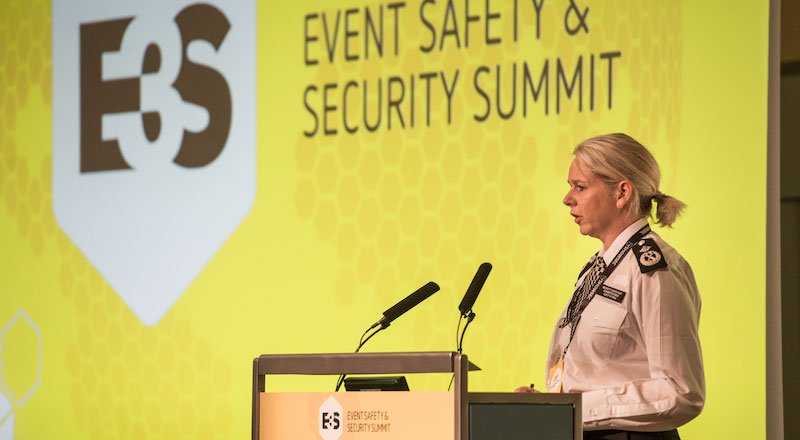 Lucy D'Orsi: “We should all be operating to a very similar standard"

The Manchester Arena bombing of 22 May 2017 was a “game-changer” from a counter-terrorism perspective, laying bare the importance of a strong private security presence to combat the growing threat to ‘soft’ targets such as concerts, said Metropolitan police commander Lucy D’Orsi, opening the second edition of the Event Safety & Security Summit (E3S) on 30 October.

The Met’s deputy assistant commissioner in specialist operations gave a 15-minute welcome address in which she said the Manchester attack – along with the vehicle ramming attacks in Westminster and on London Bridge in March and June 2017, respectively – proved that “anything is potentially a target; anything is possible”.

D’Orsi’s address kicked off a packed day of panels, presentations and workshops for the sophomore E3S, which boasted more than double the content of last year’s debut event. More than 300 professionals from 20 markets attended the day.

Other highlights included a speech by Lord Kerslake, author of the eponymous inquiry into the Manchester Arena attack, who presented the key findings and recommendations of his report; panel sessions on ‘Protecting the Future of Live Events’, which examined what initiatives are helping develop an international safety culture, and ‘Learning Transferrable Lessons’, which considered operations from the World Cup to state visits by US presidents to learn lessons from each scenario; and a host of talks and workshops covering security training, emergency messaging, behavioural detection, lockdown procedures and more.

Lord Kerslake described the Manchester Arena bombing – the deadliest terrorist attack in the UK since the 7/7 bombings of 2005 – as a “brutal, real-world test” of the venue’s security procedures.

The Manchester Arena bombing was a “brutal, real-world test” of the venue’s security procedures

He identified four key lessons event organisers and venues should learn from the tragedy: That his review, commissioned by mayor of Manchester Andy Burnham, was “the right thing to do, and should become standard practice in future”; that “importance of partnerships” between stakeholders, as well as thorough emergency planning, “cannot be overstated”; that a “genuinely multi-agency approach” is needed in case of emergency (“even in strong partnerships, the tendency of agencies under pressure to default to a single-agency way of working is extremely strong,” he explained); and that however good those plans are, “the reality will be different. There is no substitution for good situational awareness and discretion.”

As terrible as the attack was, Lord Kerslake concluded, had it taken place ten minutes later – when more young fans were exiting the arena – the outcome would have even worse. “We cannot afford to be complacent,” he said.

A key theme of the E3S 2018 was the importance of openness among stakeholders and the ability – and will – to share crucial information.

The O2 head of operations Danielle Kennedy-Clark said the live events industry needs to get better at sharing data with each other. “As a venue,” she commented, “we have a very close relationship with local authorities and other stakeholders […] but I do still feel a lot of the time security is seen as a big secret. We’re getting better but there’s still a long way to come.”

Tony Duncan, who works as tour security director for artists including U2, Madonna, Rihanna and Sir Paul McCartney, said the events security landscape is currently “fractured at best”, tending to “react to big events”. The industry could, he suggested, benefit from “formalis[ing] procedures across the board”.

One popular presentation at E3S was a preview of the new Green Guide, given by Ken Scott of the Sports Grounds Safety Authority. Scott also spoke about how his organisation, formerly the Football Licensing Authority, was formed after the Hillsborough disaster to “sit over the top of all those competing commercial entities [football clubs] and take the best bits of each, which you [the entertainment industry] don’t have”. “Maybe you need something similar,” he said.

The SEC’s Jeanette Roberts, a former inspector for the Health and Safety Executive (HSE), suggested there could be an HSE-style government agency to set security standards industry wide. With HSE, she explained, “what they did was reach out to the industry for their knowledge – it was a brave step for the agency to go and say, ‘We need your help’.”

From a police perspective, D’Orsi concluded by saying it’s a long-term police goal to share as much information on threats as possible with venues and private security companies. Addressing delegates, she said: “Many of you represent iconic locations and events which are often broadcast live – and if you look at the propaganda put out by ISIL [Islamic State], Al-Qaeda and other groups, you are attractive targets.

“There will be less policing at live events in future – but the ambition to share as much as we can with you is very strong, and I’m confident we will achieve that.”