Making music GREAT: How the UK is driving growth in the global industry 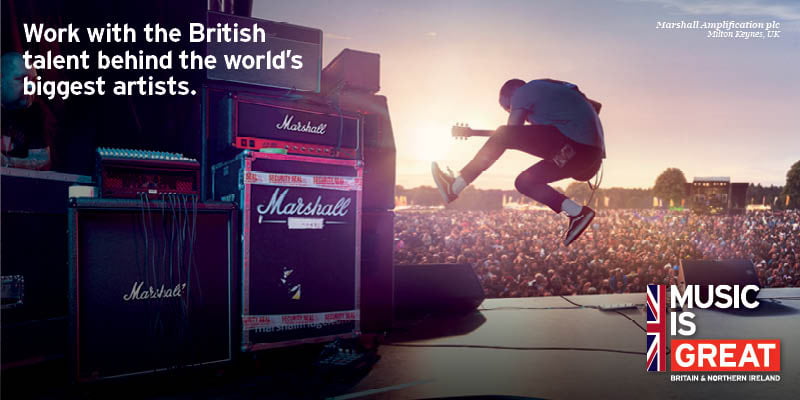 The UK’s festival circuit is the envy of the world, famed for international heavy hitters like Glastonbury, Reading and Leeds, Isle of Wight Festival, Bestival and Lovebox, as well as many hundreds of smaller events, all with their own niches and loyal audiences.

The British festival scene draws in foreign performers and music tourists – 12.5m of the latter in 2016 alone, making up 40% of the total live music market – and domestic audiences alike, while outside the festival scene, the UK also has a well-established, thriving live network spread across the entire country.

But British music isn’t only driving growth in Britain – it’s the engine room of the global live music industry. The richness and diversity of the UK’s festival landscape is reflected throughout a diverse UK talent pool making waves globally – from its world-leading, genre-defining artists to festival organisers, labels, promoters, agencies, studios, producers, sound and event technology companies, distributors and more.

Whether it’s Ed Sheeran breaking records all over the planet and Stormzy starting a grime revolution; Festival Republic exporting UK festival culture to the world and London’s powerhouse agencies securing the best deals for global talent; or world-beating recording studios, management companies, music publishers, ticket agents and innovative tech start-ups bringing British knowhow to a global audience, the UK has always been at the forefront of innovation in the music industry.

Nowhere is this more apparent than in the technology space, with the UK at the forefront of the digital revolution. In addition to having one of the most comprehensive digital music services in the world – UK consumers can choose between more than 70 streaming, download and cloud-based services – this innovation is revolutionising the concert and festival businesses.

Recent wins for forward-thinking UK live music companies include a host of new venue partners for Dice, a UK mobile ticketing company whose app makes ticket touting impossible; a partnership between Birmingham-based NEC Group Arenas and UK virtual reality music company MelodyVR; expansion into the US for Festicket, a fast-growing UK-based travel portal which bundles festival tickets with travel, accommodation and other add-ons; and an increasing number of cashless festivals, including Bestival (in partnership with London-based Tappit) and Northern Ireland’s Jika Jika! Festival (with Leeds-based Event Genius).

These companies – and many more like them – embody the ambition and verve that the UK music industry possesses, and go some way to explaining the increase in music tourism and the wide-scale participation of British businesses on the global stage.

Find out more about how the experience and dynamism of the UK music industry is supporting the growth of the global live music business from Music is GREAT at IFF on 25–27 September.

Want to promote your business or product with a sponsored news story/banner package? Contact Archie Carmichael on +44 203 743 3288 or [email protected] for more information.