Held on the land around Germany's Lake Störmthal, this year's Highfield Festival enjoyed a weekend of sunshine and a sold-out crowd 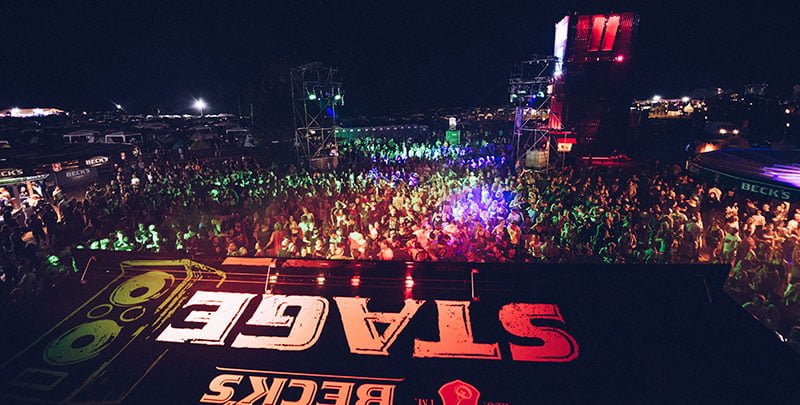 Highfield Festival, a joint venture by German promoters FKP Scorpio and Semmel Concerts, celebrated its 20th birthday over the weekend, welcoming a sold-out crowd of 35,000 music fans to the site on Germany’s Lake Störmthal.

Like many events this summer, Highfield enjoyed a weekend of good weather. Warm temperatures and no rain was particularly welcome after last year, which saw a wash-out for a number of acts. Relishing in the sunshine, festivalgoers were treated to performances from the likes of The Hives, Billy Talent and Editors.

Offstage, fans were equally well treated, with several acts making surprise appearances in amongst the crowds. Performer Eisfahrrad came to the rescue of a number of overheated fans, as he delivered water to them by speedboat, whilst Marteria hosted an impromptu autographing session in front of a mint green monster truck.

“The Highfield 2018 was so filled with emotion and special moments on and off the stage, the energy at the festival site was palpable”

Speaking of the success of this year’s sell-out event, Stephan Thanscheidt, CEO of FKP says: “The Highfield 2018 was so filled with emotion and special moments on and off the stage, the energy at the festival site was palpable,”

“Our thanks, therefore, is especially our artists who have made Highfield with their music and countless crazy ideas memorable. Our guests have thanked them with a euphoria that caused goosebumps. We are already looking forward to next year!”

The news of Highfield’s success comes after a successful festival season all-round for Germany. Northern Germany’s Wacken Open Air enjoyed huge success with the world’s first ever festival esports arena, and A Summer’s Tale in Luhmühlen reported record ticket sales for its 2018 edition.

Tickets for next year’s Highfield Festival go on sale today and are available from the festival website.