With D2C on tour, Townsend Music is bringing its successful direct-to-consumer model to the live arena. It's the future, reckons sales director Bruce McKenzie 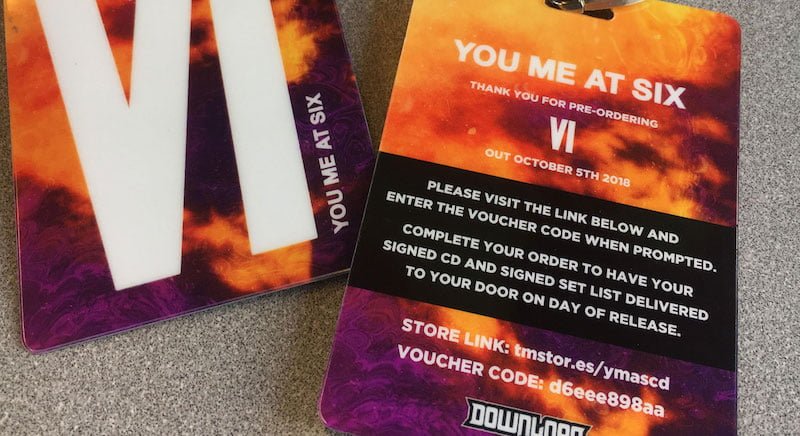 Townsend's You Me at Six laminates, as seen at Download 2018

Unlike traditional album-ticket bundles – where a copy of the record (physical or digital) is bundled with a ticket at the point of purchase – D2C on Tour utilises a venue’s merch stand(s) to sell album redemption cards, frequently in the form of artist-branded laminates, for upcoming releases.

“You can sell albums at gigs,” explains McKenzie, “but if you’re touring ahead of an album release, you can’t usually take album pre-orders. We came up with the idea that – because we run the artists’ online stores – we can add a CD to the basket, generate a code, then sell a laminate containing that code at the shows.”

Crucially, the UK’s Official Charts Company (OCC) counts the sale of these laminates as an album sale – “I went to the OCC and said, ‘It isn’t a forced sale; it’s the same as preordering an album on iTunes’,” says McKenzie – leading to chart successes like Mike + the Mechanics’ aforementioned Let Me Fly, which reached no9 in the UK.

“D2C is how people will consume their [physical] music in future”

“There are a lot of people spending a lot of money on tickets for concerts and festivals, and we feel the album charts should reflect that,” continues McKenzie. “Bands can be in front of thousands of people at a festival, but if they’re unsigned and don’t have the marketing spend, it’s difficult to make an impact on the chart. We think people buying albums at gigs should count.”

Other Townsend D2C clients include Kylie Minogue, Eels, Noel Gallagher’s High Flying Birds, the Prodigy, Everything Everything, Echo and the Bunnymen, Tom Misch, Don Broco and You Me at Six.

With Primary-signed You Me at Six – who headlined the second stage at Download 2018 – Townsend sold laminates containing a code which, when redeemed on the Townsend Music website, earns buyers a signed copy of the band’s album VI (released on 5 October) and a signed setlist from their Download performance.

D2C on Tour netted You Me at Six a “couple of hundred extra” sales at Download, says McKenzie. He describes that as a “nice little start”, but says he sees a time when “we’ll be selling more albums on the road [than not]”, as awareness increases among managers, promoters and agents of the potential of Townsend-style bundling.

“If you’re a good band with a good management team, it’s a very exciting time for artists,” he explains. “You look at the high street, and the decline of retail sales, and it’s clear the future is in streaming. So, D2C – that, to me, is how people will consume their [physical] music in future.”

“If lots of rock bands are selling tickets on the road, they should be selling records, too”

The key to success in this brave new world, McKenzie suggests, is in working with a team who “realise where the industry is. If we all work together to help an artist to sell more records, they’ll sell more tickets, more merch, get more PRS [royalties]…”

McKenzie says Download promoter Live Nation was “very supportive” of Townsend’s presence at the festival, while managers are keen to work with the company owing to its demonstrable influence on the album charts. (Another recent project, he adds, was a Rick Astley pop-up shop in a venue, where the CDs sold contributed to Astley’s latest album, Beautiful Life, peaking at no6 in the UK.)

“In the live arena, people say, that’s where you make the money – fine, but let’s find a way you can market records at gigs,” he adds.

Ultimately, if it increases album sales, initiatives like D2C on Tour are a positive for all stakeholders, says McKenzie. “If artists can sell thousands of album pre-orders at shows, they’re going to have a higher charting record and more chance of getting on the radio… And promoters will realise they can sell more tickets if an album is bundled with them, and vice versa.

“If lots of rock bands are selling tickets on the road, they should be selling records, too – and the charts should be fairer and reflect that.”