The feeling of confidence across the European arenas business is palpable, following a bumper 2017, finds IQ's second European Arena Yearbook

The sophomore edition of EAY finds Europe’s arenas imbued with confidence, amid growing consumer confidence and economies and an audience of 740m consumers hungry for live entertainment.

More than 37.5m tickets were sold to over 6,200 events hosted by the venues surveyed by the EAY 2017, and many arena bosses are predicting even better results in 2018.

Live music, bolstered by an increase in large tours, continues to dominate in terms of market share, average attendance and average ticket price: 42%, 19.3m and €54.88, respectively. However, concerns over issues such as artist fees, high ticket prices, competition and production costs for major tours mean many promoters and venues are increasingly investing in alternative programming, including esports, sporting events and shows by local artists, to lay strong foundations for the future.

EAY – a standalone publication which replaces IQ’s traditional European Arena Report – is produced by ILMC in partnership with the European Arenas Association (EEA) and the UK’s National Arena Association (NAA). Seventy-three European arenas contributed to the second edition – four more than in 2017’s inaugural yearbook – which tracked more more than 6,200 performances across the continent.

Once again divided into six regional focuses – central and eastern Europe; France and Benelux; Germany, Switzerland and Austria (GSA); the Nordics; southern Europe; and the UK and Republic of Ireland – the second EAY also includes a big-picture overview of the European industry and comprehensive features on venue security and innovative technologies for arena managers.

“Building on the success of the inaugural European Arena Yearbook in 2017, this year’s edition includes data from 73 venues across the continent and underlines just what a buoyant, progressive sector the European arenas business is, employing thousands of people and supporting other industries such as hotels, restaurants and bars by attracting large-scale audiences to concerts, family shows and other forms of live entertainment,” writes IQ/EAY editor Gordon Masson.

“This year’s edition underlines just what a buoyant, progressive sector the European arenas business is”

“As for the major statistics from this year’s EAY, our surveyed venues reported total box office revenues of €1.65bn, with more than 37.5m people visiting their premises for more than 6,200 events and performances. With artist fees and production costs continuing to rise, it’s no surprise that average ticket prices for live music again increased, hitting €54.88 in 2017. But non-music event tickets averaged out at €32.31, marking the third year in a row that prices across Europe have fallen.”

Other key takeaways from EAY 2018 include…

Music spend breaks €1bn
Total spend on live music increased significantly on 2016’s €868.5m – although average ticket prices across all events, including non-music genres, fell slightly on the previous year, at €43.87, compared to €44.34 in 2016 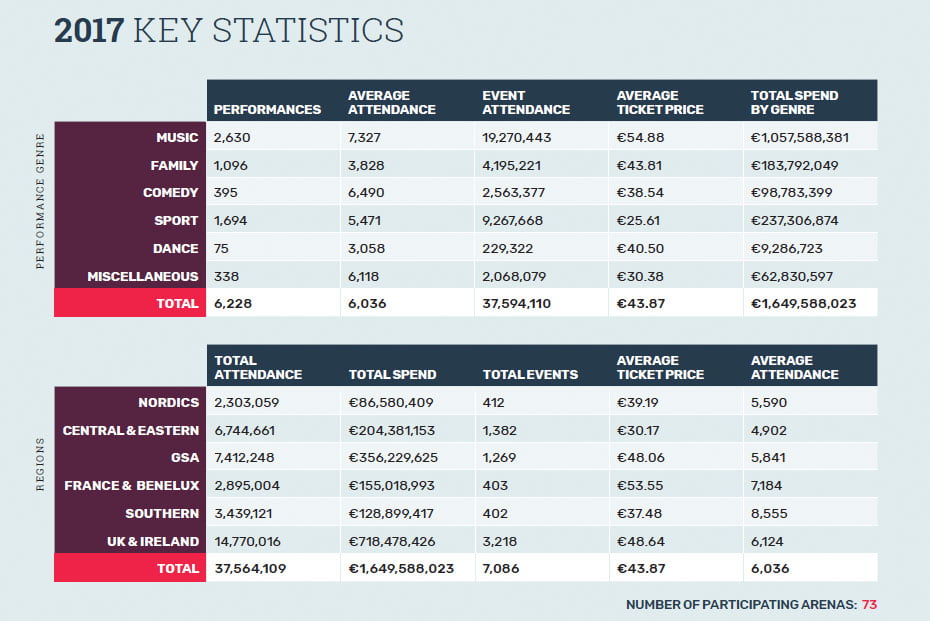 Southern Europeans still out in force
Once again, the region of southern Europe – renowned for having the most passionate fans in Europe – takes the crown for the highest average attendance. At a whopping 8,555, it’s well above the overall average and a long away ahead of its closest competitor, France & Benelux (7,184)

… and bullish on future growth
Now recovering strongly since the economic crash, the countries of southern Europe – Italy, Malta, Portugal and Spain – are experiencing a strong and busy market, with all venues surveyed reporting excellent results… and optimistic about the future

Optimism (mostly) prevails
Survey respondents were asked how worried they felt about a variety of factors affecting their businesses, with the most commonly cited being artist fees, ticket prices and the state of the national economy. But the results indicated there’s a feeling of optimism across the industry – with very few reporting feeling “very” or “extremely” concerned about any of the topics