From Bowie playing the Wall to becoming the first public promoter, DEAG has broken new ground throughout its 40-year journey. IQ meets the man who started it all 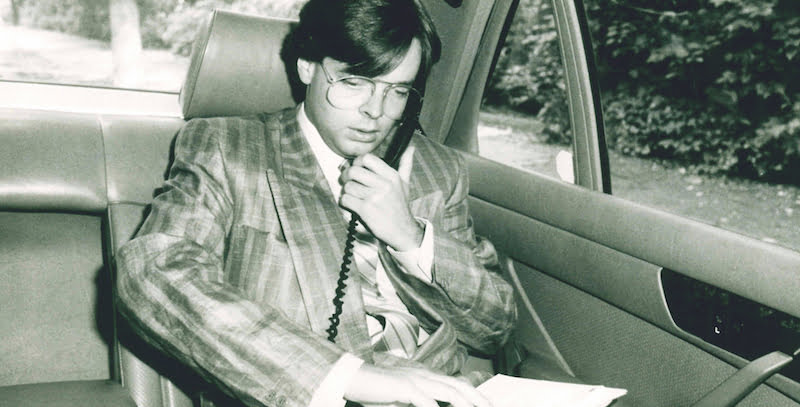 Peter Schwenkow: An early adopter of those newfangled mobile phones

At one point in our interview – after taking us through four decades of live events history and entrepreneurship on the highest level – Peter Schwenkow pauses and says: “Which brings us to the answer to a question you have yet to ask: Why are you still doing this?”

Frankly, it had never occurred to IQ to ask why he’s still doing this. The promoter recently expanded the company’s presence in the UK market by buying Flying Music, its turnover is more than €108 million in the last three quarters and it’s back in profit after a turbulent 2016.

He’s recently had hit tours with Disney on Ice, Ed Sheeran, Aerosmith, Iron Maiden and Kiss, and has 2.2 million tickets already sold for 2018. Now, aged 64, he seems to still have the same joy for the business he discovered more than 40 years ago.

“It must have been 1974 or ’75. After completing my school exams in Hamburg, I was working as a tour manager for Karsten Jahnke. Because I had my own car and a driver’s licence, I was the one picking up artists like Ulrich Roski or Mike Krüger from the airport, and driving them around northern Germany and Hamburg,” Schwenkow remembers.

One person had a bigger impact on him than anyone else had at that point: writer and performer Hanns Dieter Hüsch, one of Germany’s most distinguished left-wing intellectuals and cabaret artists. Schwenkow, who had a politically conservative upbringing, remembers the countless hours of conversation he had with Hüsch. “He was around 50–60 years old, I was 20. We used to have wonderful arguments about politics, and eventually developed a friendship. This led me to think: ‘If it is possible to meet such interesting, exciting, powerfully eloquent and intelligent people in this business, I want to be a part of it.’”

It was the mid 1970s, and the business looked very different to today. “One lamp on the left, one on the right, five Marshalls in the back and something that started to resemble a PA,” Schwenkow recalls. “If an artist wasn’t able to perform – because it was still sex, drugs and rock’n’roll in the 1970s – they simply didn’t.”

“If an artist wasn’t able to perform – because it was still sex, drugs and rock’n’roll in the 1970s – they simply didn’t”

After leaving school, Schwenkow studied advertising and communication science in Berlin, and worked part-time for the city’s biggest promoter at the time, Konzertdirektion Jänicke, starting out as technical director. He went on to do the promotion and different other jobs for Jänicke, working mostly from home. His boss had promised him his own office once he could afford a bigger space, and even offered to make him a junior partner.

In 1978, Jänicke moved into a huge new villa. “When I had my first appointment with him there, he was sitting in an office that seemed as large as a football field,” Schwenkow remembers. “There was only one desk in it, so I said: ‘Mr Jänicke, now that we’ve got these new facilities, where is my desk going to be?’ And he replied that we had to talk about that again. That’s when I realised that he had used me for the past two years.”

So Schwenkow called his old friend Jochen Zanke, whom he met while working for two other legends of the game: Horst Lippmann and Fritz Rau, where Zanke was tour manager. “I said: ‘Jochen, I think we should start our own thing and prove to this old man that you can be competitive, even with less resources.’

Forty years of development
From those early beginnings, DEAG’s 40-year history can be more or less subdivided into four decades that defined the business in different ways. “For the first 10–11 years, from 1978 to 1989, Concert Concept established itself as the biggest promoter in Berlin,” says Schwenkow, who adds that the exclusive takeover of Berlin’s Waldbühne (22,290-cap.) in 1981 was “one of the most important factors for our growth,” as it gave him control over the most exclusive address for open-air events in the city. He kept renewing the lease contract, running the show at Waldbühne for 27 years to come.

In 1984, Schwenkow created the Berliner Sommernachtstraum, which attracted some 400,000 people to a gigantic firework display by Austrian artist André Heller in front of the city’s Reichstag. At the time, the city was still divided by the Berlin wall, and the concert provoked unrest in East Berlin from those on the other side, who were disappointed they couldn’t see the spectacle too.

Three years later, he promoted the legendary Concert for Berlin with David Bowie and Michael Jackson, right next to the wall. It’s a concert that’s gone down as a key moment in the history of that city. Bowie told Performing Songwriter in 2003: “They’d backed up the stage to the wall itself so that the wall was acting as our backdrop. We kind of heard that a few of the East Berliners might actually get the chance to hear the thing but we didn’t realise in what numbers they would. And there were thousands on the other side that had come close to the wall.

“So it was like a double concert where the wall was the division. And we would hear them cheering and singing along from the other side. God, even now I get choked up. It was breaking my heart. I’d never done anything like that in my life, and I guess I never will again.”

In 1988, Schwenkow lined up Pink Floyd, Genesis, and Eurythmics to perform. Many young people in East Germany tried to get close to the wall to hear the concert. At one point during sound check, Pink Floyd turned their PA system around to point eastwards, and blasted out The Wall. The concerts provoked further violence between young people and the police in East Berlin, but the end was nigh for the country’s division. A year later, on 9 November 1989, the wall fell – and the number of potential concertgoers doubled over night.

Continue reading this feature in the digital edition of IQ 76, or subscribe to the magazine here