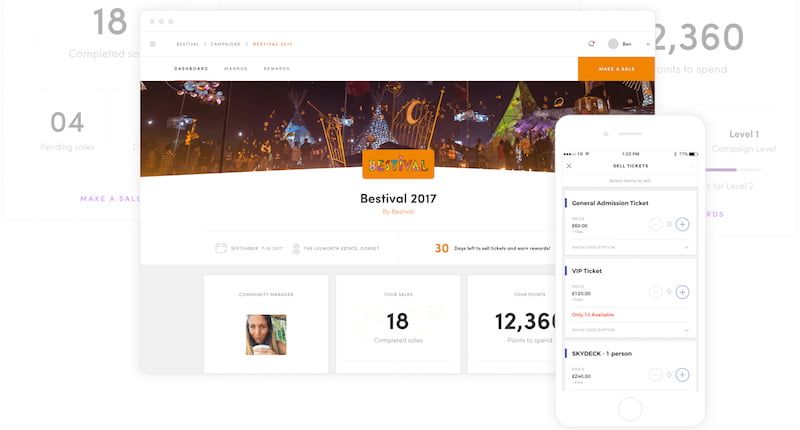 Word-of-mouth live entertainment marketing platform Verve has raised US$18.5 million in a new funding round, bringing its total investment up to $28.5m.

The platform, formerly known as StreetTeam, closed a $10m funding round last October, with label giant Universal Music Group among the investors. The latest round of investment was led by venture-capital firm Draper Esprit, and also includes existing investors Kindred, Frontline Ventures, and Backed.

Verve’s VP of client success, James Beaumont, spoke at the International Festival Forum (IFF) last month, explaining to festival delegates how its software works. Verve’s model is based on the premise that ‘the best way to be sold an experience is to hear about someone else’s’, and allows festival fans to become ‘ambassadors’, earning free tickets and other prizes by earning points from selling tickets to their friends. This, said Beamount, is about “really targeting the 10% of people who are already your customers, empowering them to go out and spread the word”.

The peer-to-peer model also drives incremental sales, he continued, as someone coming to a festival with a large entourage – in one case, up to 56 extra people – will collectively spend more at the event.

Using Tinderbox festival as a case study, Beamount revealed 285 ambassadors sold 2,500 tickets – or 5% of the event’s capacity – in its first year. The Verve platform is especially effectively for selling to millennials, he added, as “gen Z has become accustomed to ignoring” traditional advertising, especially online.

Verve, whose customers include Live Nation, AEG, C3, Bonnaroo, React Presents, Bestival, Digital Dreams and Electric Zoo, has grown from 170 to 450 clients over the past 12 months, selling more than half a million tickets. It will, it says, use the new funding to “continue its global expansion within the live entertainment sector, as well as enter new markets” (it is currently active in the UK and US).

Simon Cook, CEO of Draper Esprit, comments: “Callum and Liam [Negus-Fancey, co-founders] have built a world-class team who we back with full confidence, and we very much believe in where Verve is heading. Today’s audience is becoming immune to traditional advertising and increasingly prefer to discover through friends and people they trust.

“Verve has already proven word-of-mouth is a scalable and powerful tool for live entertainment, and we will support them in taking this channel to other markets and sectors.”

“Kindred is delighted to have increased their commitment to Verve as a part of this financing round, joining a strong global venture-capital brand in Draper Esprit,” adds Leila Zegna, a founding partner of Kindred. “Since our first investment in the company in 2016, we have been continually impressed by the build-out and strength of the management team and consistent execution against ambitious product and commercial targets.

“Going forward, we are excited about Verve’s ability to not only dominate the festival market but also penetrate the enormous opportunities within music and sport on a global basis.”