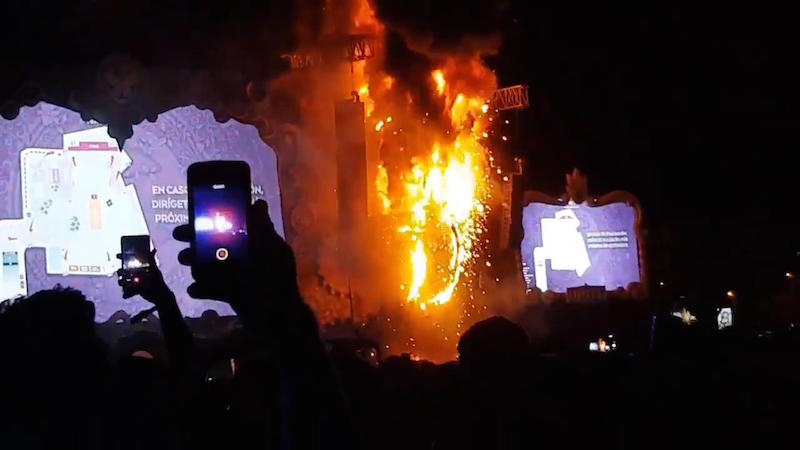 More than 22,000 fans were evacuated safely from an EDM festival in Spain at the weekend, after fire destroyed part of the main stage.

Held in the Parc de Can Zam, in the Barcelona suburb of Santa Coloma de Gramenet, the one-day festival, on 29 July, was part of the Unite with Tomorrowland series of international events, which linked music fans in Israel, Lebanon, Malta, South Korean, Germany and the United Arab Emirates with the flagship Tomorrowland gathering in Belgium. An eighth event in Taiwan was cancelled because of a typhoon.

The cause of the fire is under investigation but eye witnesses reported seeing pyrotechnics setting light to a bank of speakers.

Despite some criticism from fans on the site in Spain, who claimed that no professionals were on hand to marshal the evacuation, nobody was injured in the incident, although local reports say that some people were treated for anxiety.

“Authorities will follow up and continue the investigation with the local Spanish organiser of Unite.”

Organisers immediately moved to reassure fans that they would be fully reimbursed for the cost of their tickets in addition to any balances remaining on their cashless payment wristbands.

In a statement, the local promoters said, “Thanks to the professional intervention of the authorities all 22.000 visitors were evacuated safely and without reports of injuries. Authorities will follow up and continue the investigation with the local Spanish organiser of Unite.”

Building on the massive international success of Tomorrowland, the Unite events allow fans in other territories to experience the main festival through live broadcasts and “synchronised special effects with the show in Belgium”.

The Spanish event was scheduled to end at 3am with a headline set by superstar DJ Steve Aoki. Firefighters had the blaze under control within about half an hour, but because of the possibility of the stage collapsing, the event was cancelled at 10.15pm local time.