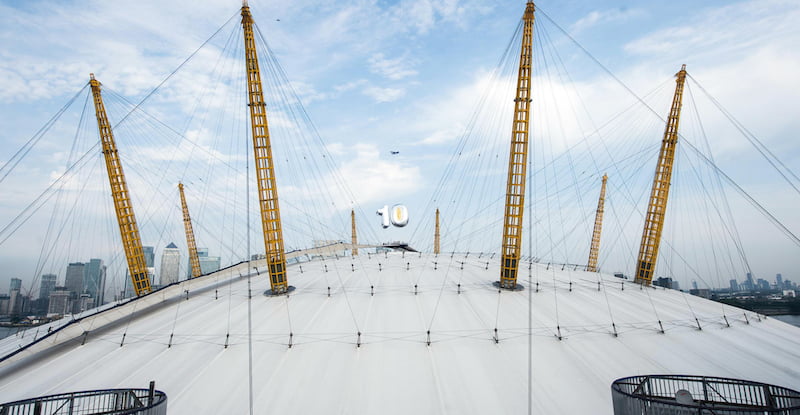 A 10th-birthday balloon suspended over the venue

When, back in 2001, AEG founder Phil Anschutz brokered a deal with the British government to turn the much-maligned Millennium Dome into his company’s flagship London venue, many were, understandably, sceptical.

The Dome was, after all, widely ridiculed as an £850 million vanity project for then-prime minister Tony Blair: a “great, frayed tent by the Thames” that very nearly finished off the political careers of cabinet ministers Peter Mandelson and John Prescott.

It’s a credit to Anschutz’s vision, then, that, 16 years later, a once-derelict site on the Greenwich peninsula polluted by toxic waste from a nearby gasworks is now home to the world’s busiest music venue – a far cry from the unoccupied white elephant that came to epitomise what many saw as the blind optimism of the early New Labour era.

What is now The O2 Arena – the 21,000-capacity centrepiece of The O2 entertainment complex – opened its doors on 24 June 2007, with a concert for staff featuring Tom Jones, Snow Patrol, Basement Jaxx and Snow Patrol. Its first major show, by Bon Jovi, followed the next evening.

It took just a year for the new venue to leapfrog New York’s Madison Square Garden and the UK’s MEN Arena (now Manchester Arena) to become the world’s top arena for ticket sales – 1,806,447 in 2008 – a position it has held ever since.

As The O2 celebrates double figures by signing another decade-long deal with naming partner O2 and hosting a series of big-name tenth-birthday shows (with more dates to be added later in the year), IQ catches up with The O2’s general manager, John Langford, and programming director, Emma Bownes, to find out what the future holds for the world’s most successful arena…

IQ: How have the tenth-birthday concerts been so far?
Emma Bownes: Really great. We started with alt-J on Friday [16 June], then we had Celine Dion [on 20–21 June] and Ed Sheeran [on 22 June]. It’s had a real party atmosphere – we even had an impromptu conga line in one of the bars!

Plus, thanks to the guys at O2, we’ve had the huge birthday present [a 6x6m installation housing a game show hosted by Vernon Kay], life-sized cakes of Ed Sheeran, Celine Dion and Jamiroquai, a marching band out the front, lots of free activities… it’s been like having our own festival.

Was it difficult to persuade the acts involved to come and play? All three are mid-way through tours…
John Langford: Two things helped: Firstly, we went out chased artists who are currently playing festivals – we thought it might make sense for them play a few arena shows in between festival dates.

Secondly, we had massive marketing support from O2, which put up huge billboards across London. There’s a really brilliant picture Jay Kay [of Jamiroquai, whose planned O2 shows have been cancelled owing to the singer’s back problems] posted in front of his ad.

Just drove past our poster & jumped out with excitement, we can't wait to play for you guys! #JamiroquaiLive2017 https://t.co/lZArO8zk6Q pic.twitter.com/jcIvX9vWTI

What have been your highlights of your time at The O2?
EB: Definitely Monty Python’s farewell gigs [in 2014]. Muse’s Drones tour was amazing, and Adele was fantastic – she’s such an endearing individual.

JL: I’ve really enjoyed some of the sport –the David Haye vs Tony Bellew fight was amazing. I’m a bit of a production geek, so I also loved the lighting ‘balls’ at Red Hot Chili Peppers in December.

John, what made you make the jump from The SSE Hydro?
JL: Well, when you’re at the UK’s number-two venue there’s only one place to go!

What’s the secret to The O2’s success?
JL: It was the right venue at the right time in the right city. London is the pinnacle of the live music market, and it was under-served prior to The O2’s opening, which filled a gap in the market.

AEG really had incredible insight to understand that – they always knew it was going to be a winner, when lots of us didn’t.

“Going to a gig has changed significantly in the past ten years. Expectations are much higher than they used to be”

How has the security situation changed over the past ten years?
JL: From an AEG perspective, it’s always been high on the agenda. But the Bataclan – that’s when things really changed.

AEG has always been on the forefront of responding to these things: for example, The O2 was the first venue of its size to have full search and scan on the doors.

Did you see a drop-off in attendance after the Manchester Arena bombing?
JL: No, there was no drop-off – in fact, we had Iron Maiden here the week after the attack.

Bruce Dickinson put it well when he said, “When we’re all together like this, it sends a message of love, of peace, of joy…”
JL: We all have a role to play to ensure the industry stays healthy and vibrant. We can’t let them change our lifestyles.

EB: The fans, too: At Ed Sheeran we had people wearing Manchester T-shirts, which was great.

Emma, what are you booking most of at the moment?
EB: From the programming side, comedy is definitely on the rise again. We’ve got 12 nights with Micky Flanagan coming up, all sold out. Rock shows are still big, and we’re doing more sports – as well as our own festivals, which we’re trying to schedule for quieter periods.

How about esports?
EB: We haven’t had any esports at The O2 yet, but watch this space. I’m also programming director for The SSE Arena, Wembley, where we have League of Legends events. Last time we had 6,000 people per day for four days.

It feels a lot like a gig – the crowd are really excited. If I watched it I wouldn’t understand what was going on, but they know the games so they can appreciate the strategy.

Finally, what’s your goal for The O2’s next ten years?
JL: To ensure we’re meeting needs of fans. Going to a gig has changed significantly in the past ten years, and expectations are much higher than they used to be.

It’s really about focusing on the fan experience. Content is obviously an integral part of that, but it’s also about matching what you’d get in the centre of London: cold beer, decent food, hospitality…

Are you finding fans like the ‘entertainment district’ model of having everything in one place?
JL: Definitely. It’s what consumers want. We’ve got our designer outlet coming in September next year, we’re expanding our cinema concept – people want 24/7 entertainment, and these sorts of facilities should be integrated into entertainment complexes when they can.

Not every venue has the capacity – but the advantage for us is that we’ve got the space to do it.