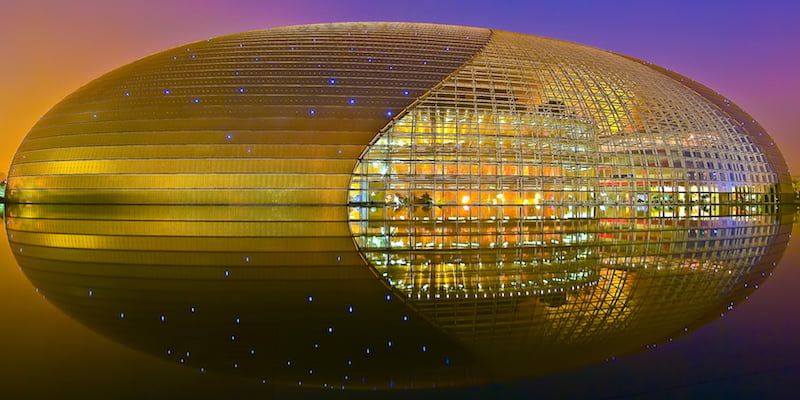 … But with expectations among the ticket-buying public now higher than ever, it’s perhaps not surprising that the venues that host concerts and events now have to be as eye-catching as the shows themselves. Eamonn Forde highlights ten of the most innovative building designs

It took six years and ¥2.7bn (€365m) to build this 5,452-capacity venue (split across three rooms, the biggest of which holds 2,416 people) and it opened for business in December 2007. Unsurprisingly, it is known locally as the ‘Giant Egg’, as if an enormous robot chicken marched across China and laid it there. It is constructed from titanium-accented glass and is surrounded by an artificial lake (the reflection from the water giving the building – which really looks like a computer mouse – its ovum shape).

Given its nickname, it’s the perfect place for rock bands to play their new albumen (sorry).

Harpa Concert Hall, Reykjavik
Sitting on the very lip of Europe and staring across the desperately cold waters of the North Atlantic, Harpa opened for business in 2011 and cost €164m to build – which is probably about the same price as a round of drinks in the Icelandic capital today. As it was nearing completion, the Icelandic financial crisis was unspooling in the background, so it’s incredible that it was actually completed.

It holds up to 1,800 people in the main hall, as well as being a focal point of Iceland Airwaves. In stark contrast to the genteel and low-rise feel of most of central Reykjavik, it looks like Escher let loose with glass Lego.