Paul Hutton of Crosstown, which has taken over promotion duties from Harvey Goldsmith, tells IQ OnBlackheath has the potential to become the "go-to event of the summer" 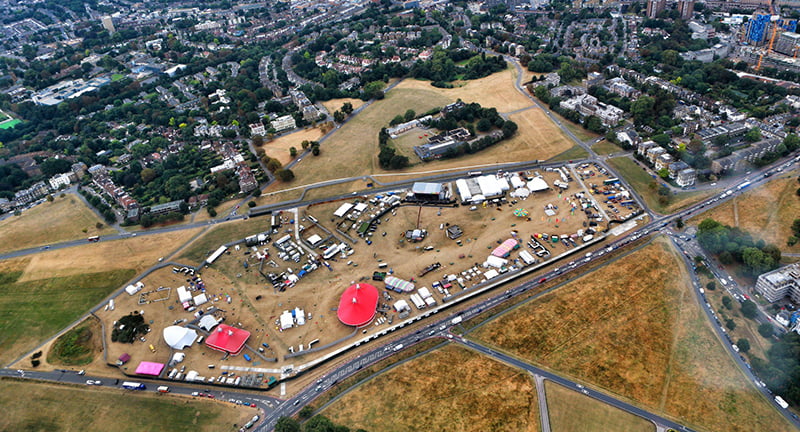 An aerial view of the heath at last year's festival

OnBlackheath, the south London festival organised since its 2014 launch by Harvey Goldsmith CBE, has a new promoter.

As of this September, the festival is presented by fledgling promoter Crosstown Concerts – the new venture launched last September by former Metropolis Music directors Paul Hutton and Conal Dodds – although the relationship stretches back far earlier, Hutton tells IQ.

“There’s lots of history there,” he explains. “We [Metropolis] were going to go for it before Harvey Goldsmith, but for various reasons it didn’t happen.”

Hutton emphasises that the decision to take on the festival – which follows Massive Attack at the Bristol Downs last September and Bristol Sounds, scheduled for 21–24 June at the 20,000-cap. Canon’s Marsh Amphitheatre, as its third major open-air event – was primarily “artist-led”: “The value we bring to it is that we’re contemporary promoters,” he comments. “The agents and artists we work with, a decent chunk of them would fit bill for this event… As a promoter you do what the acts want to do.”

“We get approached all the time, two to three times a year, by someone who has a bit of a land – a football club, a stately home, a load of fields – and they say, ‘Why don’t you do a festival here?’,” Hutton continues. “We say, ‘Yeah, okay, you tell us who you want to play in your field 15 miles from anywhere!’

“If we have someone really famous that comes to us and says, ‘We want to do a show in a field in Sussex’, that’s one thing – but you can’t just ring an agent and say, ‘Do you your acts want to play in a field in Sussex?’. Unless you offer them a huge amount of money, of course – in which case people will play anywhere…”

While already successful, Hutton says OnBlackheath – created three years ago by partners Tom Wates, Alex Wicks and Terry Feldgate – “needs to become the go-to event for the summer for certain artists”. For acts who “don’t fit the Lovebox, Field Day thing, who aren’t big enough to headline Hyde Park”, the 25,000-capacity Blackheath site, split between Greenwich and Lewisham in south-east London, is, he says, the perfect mid-sized city festival venue.

“We’ve had really positive feedback from artists,” Hutton continues. “OnBlackheath is gradually becoming part of the calendar. As years go by, it will, I think, become very much part of people’s thinking. It fits a lot of artists, and it’s a great area.”

The line-up for OnBlackheath 2017, which runs from 9 to 10 September – the same weekend as other end-of-season favourites Bestival and Festival №6 – will be announced next Monday (24 April).