Several of Virginia's biggest venues, as well as promoters, ticketers and industry groups, have signed a letter opposing a bill they say empowers "out-of-state scalpers" 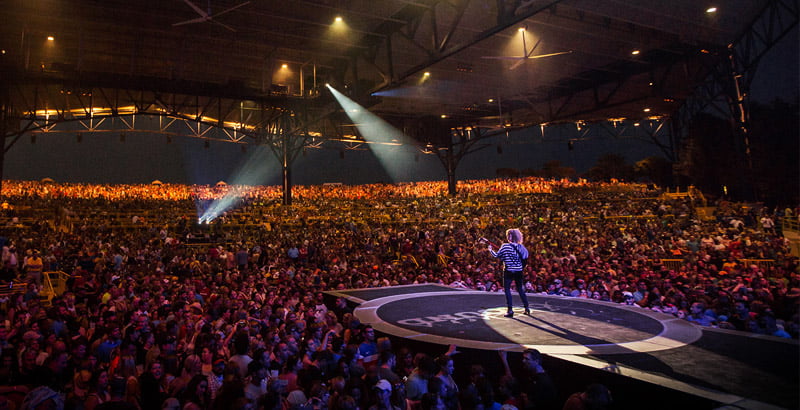 Live Nation's Jiffy Lube Live, in Bristow, is one of several arenas opposing the bill

A coalition of venues, ticketing companies, promoters and other music businesses have voiced their opposition to legislation before the Virginia General Assembly that would block the resale of tickets on “the internet ticketing platform of the ticket purchaser’s choice”.

House Bill 1825 – introduced last month by Virginia state delegate Dave Albo, who was unable to resell a paperless ticket to an Iron Maiden show he could no longer attend – and the sister State Bill (SB) 1425 would, if passed, provide for a fine of up to $US15,000 for anyone who issues tickets “through a delivery method that substantially prevents the ticket purchaser from lawfully reselling the ticket” online, or “penalises, discriminates against or denies admission to an event solely on the basis that the person resold a ticket or purchased a resold ticket on a specific internet ticketing platform”.

Calling themselves the ‘Virginia Sports and Entertainment Industry Coalition’, the companies have penned an open letter to William Stanley, the sponsor of SB 1425, criticising a bill they say would hurt “Virginia consumers, businesses and the Commonwealth’s [Virginia’s] economy.

The full, unedited, letter is below:

The following organizations write to express our strong opposition to Senate Bill 1425 and House Bill 1825—legislation that, while purportedly consumer-friendly, would only serve to benefit ticket scalpers and out- of-state companies at the expense of Virginia fans, teams and venues. Opposed are:

“This is legislation promoted by scalpers who aim to limit the ability of artists, teams, venues, and promoters to determine the terms under which tickets to their events may be sold”

The sports and entertainment industry is a huge source of pride for the Commonwealth—hundreds of millions of dollars have been invested in venues, sporting events, concerts, and other live event productions, significantly contributing to the employment of thousands of Virginia residents. This bill is an attempt by out-of-state ticket scalpers and companies to use legislation to shape the marketplace in order to protect their profits—to the detriment of Virginia consumers, businesses and the Commonwealth’s economy.

This is legislation promoted by companies and scalpers who aim to limit the ability of artists, teams, venues, and promoters—the event presenters who financially and creatively invest in putting on an event—determine the terms under which tickets to their events may be sold. Thus, ticket scalpers aim to use the bill to dictate how event presenters can sell what they create. This is as simple as Virginia event presenters vs. out-of-state scalpers and companies. If fans don’t like certain types of tickets, they will vote with their wallets by choosing other types of available tickets or tickets to other events. The Connecticut Department of Consumer Protection used this same rationale when studying the issue, and recommended that market forces—not the state legislature—should decide such matters.

The real industry-wide problems that need to be addressed are the lack of consumer disclosures from scalpers and deceptive resale websites in the secondary marketplace. The lack of disclosure on resale sites prevents fans from making informed purchases and the State from collecting appropriate taxes. Fans routinely purchase tickets in the secondary market unaware of the original price, or that they are shopping on sites where prices often exceed face value. They’re also often purposely misled by language or images of an artist, venue, team, or an entertainment event to give the appearance of an official or legitimate ticket selling channel. We encourage the Virginia Legislature to pursue stand-alone FAN-protection legislation that puts fans first instead of out-of-state scalpers.

Senate Bill 1425 and House Bill 1825 are protecting the profits of scalpers and out-of-state companies, not the best interests of Virginia fans. The signatories to this letter employ people here, pay taxes here, or help attract tourism and visitors contributing to Virginia’s economic base. We have a vested interest in ensuring that fans have a great live entertainment experience—and that they come back again and again. We’re standing with fans against this legislation, and we urge you to do the same.

Please oppose this legislation and support our Virginia live entertainment industry and fans.