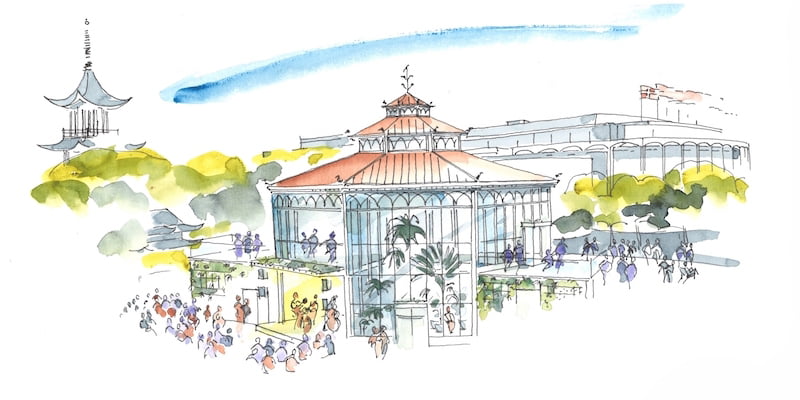 The architect's impression of the Orangeriet

A new music venue will open at Tivoli Gardens next spring, the Copenhagen theme park and pleasure gardens has announced.

The greenhouse-style Orangeriet – Danish for ‘Orangery’ – will open its doors on 6 April, when Tivoli opens for the summer season, and feature a small concert stage amid “trees, shrubs and rare flowers” the park says will provide guests with an “experience for all the senses”.

Tivoli already has a 1,660-capacity concert hall, the Koncertsal, which is now primarily used for classical concerts and musicals but has in the past hosted artists including Elton John, Jethro Tull and the Grateful Dead.

A spokesman for Tivoli tells IQ the 370m², 20 million-kroner Orangeriet, which will double as a TV studio and multifaceted events space, will focus on popular music programming – not classical, but “all other genres” – and have a capacity of 150 seated and approximately 800 standing.

“Orangeriet is going to exude tradition and innovation”

The venue’s architect, Jesper Andersen, comments: “We have been inspired by orangeries abroad, but also by buildings as [Tivoli’s] Glassalen and the Palmehuset [Palm House] in the Botanical Garden. […] It’s going to exude tradition and innovation, which we know our customers care about.”

The opening of the Orangeriet comes amid a period of strong growth for the Danish live sector: Live Nation’s Thomas Johanssen in December hailed what he called an “exciting time for Denmark’s capital”, as the company announced it would operate the new 16,000-cap. Royal Arena, while NorthSide booker John Fogde said later that month: “I didn’t think the concert and festival market could get crazier than 2016, but it looks like 2017 will top everything we’ve seen before.”