After 10 years in development, when costs spiralled over 10x the original budget, The Elbphilharmonie is open. Will London get one too? 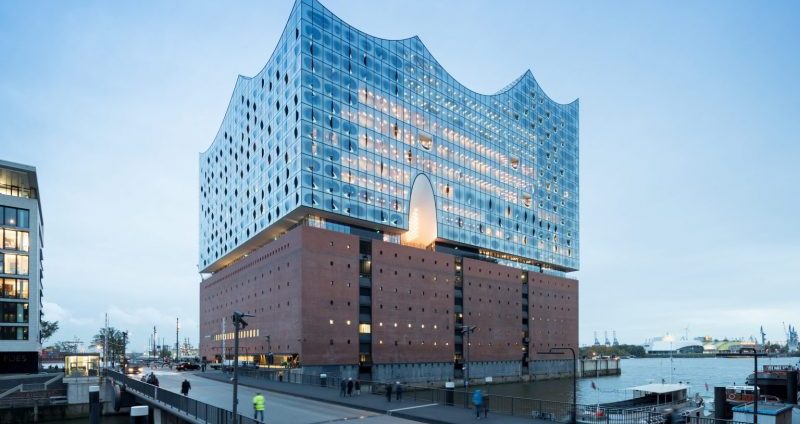 What’s said to be the most expensive and advanced concert hall ever built, located in Hamburg, has opened after a 10-year development period costing €789m.

The Elbphilharmonie Grand Hall has a 2,100 capacity and is accompanied by a more intimate Recital Hall seating 550 guests. A hotel, restaurants, bars and residential apartments also occupy the building.

Located in HafenCity at the Sandtorhafen harbour, the venue offers 360 degree views of the city at 37 metres above ground level. It has a wave-shaped roof and shiny glass facades and the Grand Hall is built from 10,000 acoustic panels. Swiss architecture firm Herzo and De Meuron are responsible for the design.

Construction started on top of a former coffee warehouse in 2007 and was originally planned to finish in 2010 with a budget of €77m. The final cost, partly financed by taxes­, is over 10x the original amount.

Japanese acoustician Yasuhisa Toyota took care of the acoustics in the Elbphilharmonie. His company, Nagata Acoustics, has also worked on the Suntory Hall in Tokyo and the Walt Disney Hall in Los Angeles. Toyota’s goal for the Elbphilharmonie Grand Hall was to showcase the natural acoustics of music as well as electronic sound systems.

The idea is to host both classical and rock concerts with future events set to feature soloists and orchestras from around the world, innovative festivals, experimental formats and concert series outside of the traditional classical music programme. The first concert to take place in the Grand Hall was conducted by Thomas Hengelbrock with the NDR Elbphilharmonie Orchester on Wednesday.

Herzo and De Meuron are now working on revamping London’s Chelsea FC football stadium. However, there are no plans to host music concerts or other major sporting events in the venue.

“Hamburg has rediscovered its musical tradition. Orchestras from all over the world will want to come to play at the Elbphilharmonie.”

Christoph Lieben-Seutter, general and artistic director of the Elbphilharmonie, has said London could benefit from a similarly grand building. “A new concert hall for London would be making a bold statement. The Royal Festival Hall acoustics are not that good. They have spent a fortune on improvements but it does not make that much difference,” Lieben-Seutter told the Evening Standard.

“I know the RFH well, I like the hall and there is always a lot of things going on but it does not excite me. It cannot be too much for a city of 10 million people to have a contemporary concert hall. Is there a demand for it? You can make the demand. Hamburg has rediscovered its musical tradition. And orchestras from all over the world want to come to play at the Elbphilharmonie.”

There is still a London concert hall in the works after plans for a new £278m venue, The Centre for Music near the Barbican, stalled when Government pulled £5.5m of funding last year. City of London Corporation have recently pledged £2.5m and development plans are back on. The Centre for Music is being led by the Barbican Centre, London Symphony Orchestra and Guildhall School of Music and Drama.