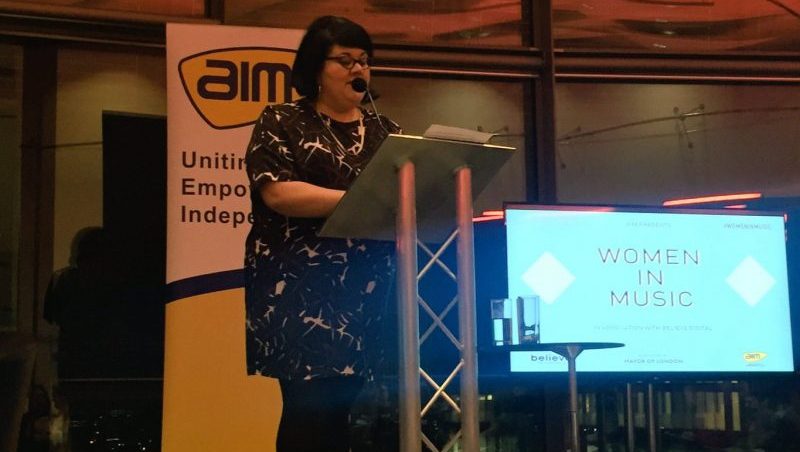 A host of women working in the live music industry offered some sage career advice and shared experiences during the Association of Independent Music’s Women in Music event last night.

AIM’s annual discussion is timely this year, arriving shortly after a UK Music diversity study that revealed while women make up 60% of internship positions and 59% of entry-level business roles in the wider music industry, those in senior executive positions are just 30% female.

Lamé, who was appointed London’s first night czar in November to champion and protect the city’s nightlife, is also co-founder and host of queer night Duckie at the Royal Vauxhall tavern. She opened the evening with a keynote speech, saying: “We need to change the conversation about women in the music industry. As women, we face enormous hurdles.

“The music industry requires many skills, backgrounds and specialisms, but it’s a very challenging sector to develop into. Low-level positions are poorly paid, formal education is expensive and the cost of bringing a product to market is prohibitive. The lack of diversity [in UK Music’s study] is self-perpetuating, as those in senior positions tend to promote people who are similar to them – mostly white men – what a surprise.

“If we don’t change the conversation and the culture there are major opportunities we will miss out on. We need to welcome people and ideas into London 24/7, and redeem and nourish entrepreneurial and creative spirit. Let’s put music and women at the very heart of London as a vibrant 24-hour city. Let’s be brave, let’s be bold and let’s do it together.”

When asked how to improve gender balance in the traditionally male-heavy live music industry, panellists suggested challenging perceptions, championing fellow women, and finding leaders who make efforts to shift culture. “I face ridicule every day I do a show,” said Grill, who also works as a production manager. “Yesterday I was doing a show and a stage manager refused to shake my hand. So I have to rise above, think more about what I say, which I always have to say twice, and give other women a lending hand.”

Bennaton pointed to positive discrimination as a necessary short-term measure, which Reed preferred to call ‘positive action’. “Discrimination sounds like it’s not deserved,” she explained. “It’s about recognising talent in places you don’t normally recognise it.”

Bertelsen said her current boss, Kilimanjaro CEO Stuart Galbraith, is able to shift the mind-set of the men she works with who assume she’s in a junior role by championing her work. “He’s been very supportive,” she explained. “He’s never made me feel any different for being a woman, he asks me for my opinion and tells me I’ve done a good job. If there are other men we are dealing with, he makes sure that if I’ve put a point forward that makes sense I’m given the right recognition for it. He sets the record straight, ‘This is the marketing manager and you listen to what she says.’”

“If you are not booking women [on festival bills] you are being lazy. It’s not hard; there are so many amazing musicians out there. How can you have less than 5% [female acts]? What are you being paid to do? Our line-up for End of the Road this year is currently 53% women and I’m not even thinking about it.”

Moving on to the subject of festival bills, the panellists agreed that bookers must do more to ensure they have a 50/50 male/female split. Said Down: “If you are not booking women you are being lazy. It’s not hard; there are so many amazing musicians out there. How can you have less than 5% [female acts]? What are you being paid to do? Our line-up for End of the Road this year is currently 53% women and I’m not even thinking about it.”

Grill puts on Fieldview Festival with five friends and said the key to a diverse booking is teaming up with people who are equally passionate but with different tastes. “If it’s one person making the decisions you get a fairly straight line-up. If you’ve got an exchange and dialogue with people that don’t like the same thing you do, you’ll end up with something diverse.”

There’s been a number of reports of sexual assault cases at festivals over the last few years and in 2015, the Girls Against campaign launched to raise awareness of and ultimately end sexual harassment at gigs and concerts. Bertelsen said Kilimanjaro pass on descriptions of males involved to venues in order to try and avoid repeat incidents. Down proposed festivals have a safe welfare space that is looked after by well-trained people, near the medics, and with a line to the police for victims to go to and talk.

“Anonymity is a groper’s best friend,” she said. “What annoys me sometimes is the pressure is only on women to prevent the assault, but it’s about education which starts at home, in schools, and it’s about bystanders as well. It’s everybody’s responsibility to keep everyone safe, if you create a friendly atmosphere at your festival, make friends with those camping next to you, that builds the foundation for a really good experience.”

Bennaton said security should be trained by specialist services and pointed to the work done by the White Ribbon Campaign – a global effort run by men to end male violence against women. Its Safe Music Report, with practical tips for festivals and venues to keep women safe and encourage men to be part of the solution, is available here. Bennaton continued: “The onus shouldn’t be on victim to come forward about abuse, we need to keep an active eye on it. We need more pro-action.”

The key to getting more women into top-level positions is a revision of 24/7 work culture, said Down, while Reed raised the example of a band applying for funding from PRS Foundation to support maternity leave. “That’s the first time we’ve ever had an application for that purpose. There are lots of practical things like that we could all be thinking about more,” she added.

Bertelsen concluded: “Think about the little things you can do to challenge the status quo and question things. I recently noticed that all radio and TV advertising I was doing offered only male voiceover artists, so I’ve asked for our ad agency and all the radio stations to use female voiceovers too. Then, be true to yourself, do what your gut feeling says and try to encourage people to change their thinking.”