After filing its own counterclaim, Eventbrite is requesting the NY supreme court throw out Wantickets' complaints, which its lawyers say lack "factual allegations" 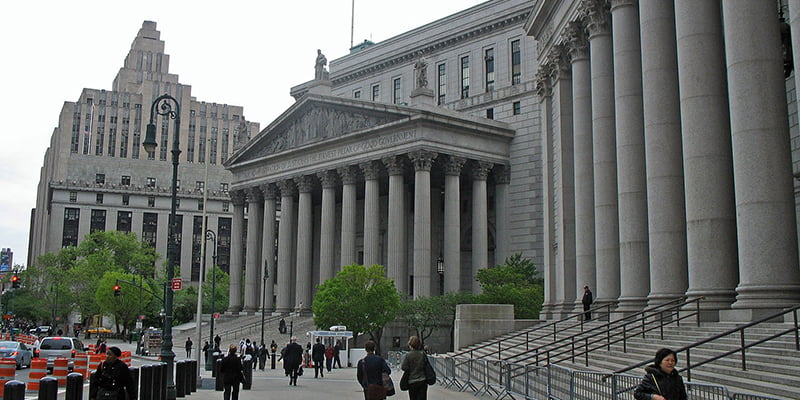 The supreme court on 60 Centre Street, where the case is being heard

Eventbrite has moved to have its legal dispute with Wantickets dismissed by the supreme court of New York, citing lack of evidence and conflict with a counterclaim in California, where plaintiff Wantickets is largely based.

EDM/nightclub ticketer Wantickets accuses Eventbrite of tortious interference and aiding and betting breaches of fiduciary duty over its hiring of former president Barak Schurr and CEO Diego Carlin, who are alleged to have been sending clients to their new employer while still at Wantickets.

In their motion to dismiss, filed on Tuesday, Eventbrite’s attorneys, Michael Ng and Lindsey Weiss Harris of Kobre & Kim, argue Wantickets has failed to make a convincing case for either of the claims.

Regarding the alleged breaches of fiduciary duty – or the duty of loyalty by people controlling a company to look to after its interests – Ng and Weiss Harris note the law in Delaware, where Wantickets is registered (as Wantickets RDM LLC), “does not impose by default a fiduciary duty on the officers of a limited liability company”, meaning Wantickets’ “merely stating that Schurr and Carlin were the president and CEO of Wantickets is an insufficient factual foundation for the existence of a fiduciary duty owed by Schurr or Carlin to the LLC”.

They further allege that “the only factual allegations in the complaint about Eventbrite’s alleged aiding and abetting is that it ‘pitched itself to potential clients’ introduced through Schurr and Carlin and ‘paid for Mr Schurr to take a business trip to Ibiza, Spain, so that he could develop business for Eventbrite'”. “Those allegations,” says Kobre & Kim, “are insufficient to plead a factual basis for, or to allow the court to draw an inference that Eventbrite knew Schurr or Carlin owed fiduciary duties to Wantickets; knew they were breaching any fiduciary duties owed to Wantickets; or advocated for or assisted in those breaches.”

As for the claim of tortious interference – that a defendant intentionally convinced a third party to breach its contract with the plaintiff – the lawyers write that Wantickets “fails to allege any factual basis for its claim that Eventbrite had knowledge of [Schurr and Carlin’s] employment agreement or its terms”. They continue: “The only non-conclusory allegation in the complaint regarding Eventbrite’s alleged tortious interference with Carlin’s and Schurr’s employment contracts is that ‘Eventbrite has approached multiple longtime Wantickets customers about switching their business to Eventbrite’, and claims that these contacts ‘were orchestrated or directed by Mr Schurr and/or Mr Carlin’. It does not allege what contractual obligation prohibited Schurr and Carlin from undertaking those actions, or how Eventbrite induced them to do so.”

Finally, as both companies “have their principal place of business in California” and “a broader action among the same parties that includes the claims herein is already further along in California”, Ng and Weiss Harris argue the dispute should be settled there, rather than in New York. (Though Wantickets’ original complaint says its headquarters are in New York, the attorneys claim “Wantickets RDM LLC is not even authorised to do business in New York and that it “does not appear to have an office at the location plaintiff has told the court is its principal place of business”.)

The plaintiff, however, accuses Eventbrite of seeking to “litigate the same issues simultaneously” in two separate venues, according to a motion filed on 6 December in the San Francisco superior court. “Eventbrite has filed an action in this […] court seeking resolution of the exact issues that are already pending before a New York court,” writes law firm Steptoe & Johnson. “This later-filed action should be stayed pending resolution of the earlier-filed New York action.”

Eventbrite’s motion to dismiss will be considered by judge Shirley Werner Kornreich on 5 January.