Colectiv fire: One year on

While Romania's president and its promoters' association have hailed the progress made towards stamping out corruption, the survivors of October's tragedy await justice 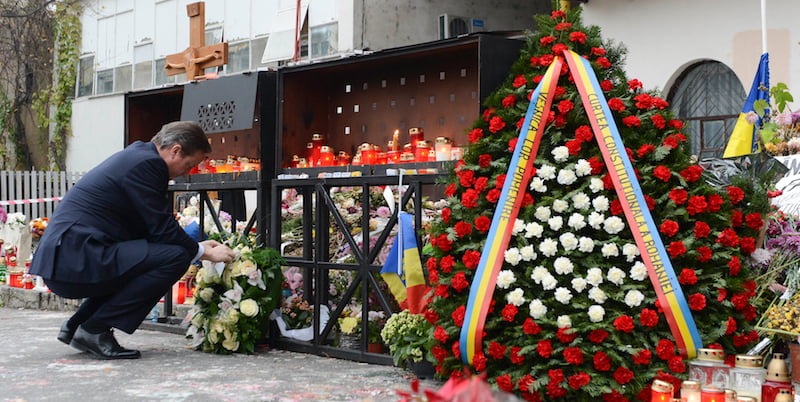 Together with the attack on the Bataclan some two weeks later, the tragic fire at the 700-capacity Colectiv nightclub in the Romanian capital, Bucharest, on 30 October 2015 is one of the worst disasters to hit the European live music industry – and Europe in general – in living memory. Sixty-four people are known to have died and close to 150 were injured, with many still in hospital, after pyrotechnics ignited inflammable acoustic foam at a show by metalcore band Goodbye to Gravity, with up to 500 people in attendance.

At an event commemorating a year since the disaster last Sunday, Romania’s president, Klaus Iohannis, paid tribute to the victims and praised the changes implemented in the wake of the disaster, which include the mass closure of unsafe venues, the introduction of an indoor smoking ban and the election of a new ‘technocratic’, non-politically affiliated government led by Dacian Cioloș after the resignation of the previous prime minister, Victor Ponta, amid mass anti-corruption protests triggered by the fire.

“Romania has changed,” he said. “A year later, things have changed for the better. Safety checks are clearer and more common at event venues.”

“A year later, things have changed for the better”

However, Iohannis criticised the speed of investigations into the cause of the fire: public prosecutors have yet to bring anyone to trial for their role in the disaster, despite Colectiv only having one exit and reportedly being well over capacity on the night of the fire. “After one year, we would like to know who is responsible for this terrible accident,” he said.

Speaking to the Associated Press, ‘Flueras’, a 32-year-old music photographer, said survivors are still awaiting the trial of the club’s owners and those involved in the firework show. “Unfortunately, there is no precedent and things haven’t moved quickly,” he said. “The trial hasn’t begun and we are [still] in a preliminary phase.”

In addition to the criminal trials, a total of 248 people are suing Colectiv representatives for damages of more than €212 million.

At ILMC 28 in March, Codruta Vulcu, festival director of Transylvania’s ARTmania, said it “took a tragedy for the government” to take notice of Romania’s music scene. “We have festivals, we have shows, but we have no regulations ­– or when they do exist they’re not enforced,” she said. “After the fire, the government realised the [55,000-capacity] National Arena had no fire licence!”

“There are more fire extinguishers at clubs and concerts, but I don’t think society is more aware”

Some progress has been made since then: a number of Bucharest venues lacking fire exits were shuttered in the aftermath of the disaster, and several more, including Expirat, La Bonne Bouche and Biutiful, were forced to close by a new law forbidding public gatherings in buildings considered to be unsafe in the event of an earthquake. (A 5.6-magnitude earthquake hit Vrancea county on 23 September.)

Cioloș’s government also banned smoking in enclosed areas, including bars, venues and restaurants, as of 16 March.

Despite these reforms, many Romanians remain unconvinced the country would be better equipped to deal with another Colectiv should it happen today. “We did not learn a lot from what happened,” Razvan Braileanu, a journalist and musician who survived the fire, tells Reuters’s Romanian correspondent, Luiza Ilie, adding that from his flat he regularly sees fire engines struggling to squeeze past cars parked in his narrow street.

“Sure, there are more fire extinguishers at clubs and concerts – but I don’t think society is more aware.”

“The private sector is now approaching the government to say let’s regulate the industry, let’s make laws a lot clearer”

For the first time since the fall of communism, she says, “we’ve found support from the government”, with ministers willing to properly regulate the Romanian live sector. “The private sector is now approaching the [government] to say let’s regulate [the industry], let’s make laws a lot clearer,” she explains. “They say, ‘We understand, we’ll try to change things.'”

Vulcu’s relief at having what she calls Romania’s “first respectable government” in 25 years is, however, tempered by the spectre of the “old communists” in the PSD (Social Democratic Party) returning to power in the upcoming general election on 11 December. She says she “truly hopes”, for the sake of the Romanian music industry, that “this technocrat prime minister [Cioloș] will be willing to say on as an independent”.