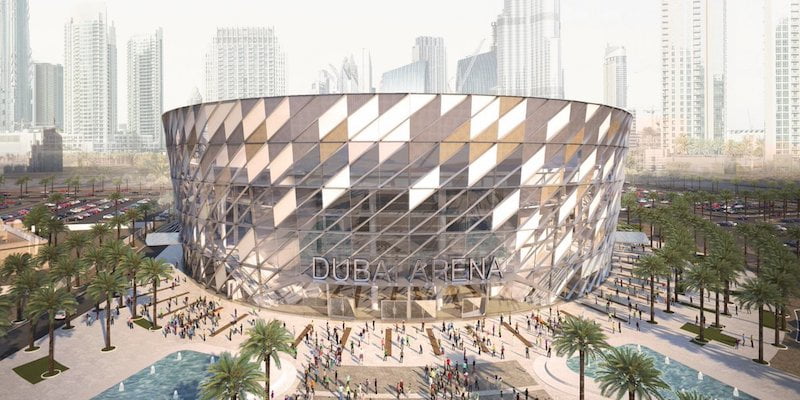 AEG’s Australian AEG Ogden subsidiary has revealed it will manage a new 20,000-capacity arena in Dubai when it opens in 2018.

He adds Dubai is located ideally to capitalise on acts flying out of, or to, Europe from venues in Asia and Australasia.

When it opens, the indoor Dubai Arena (pictured) will be, says AEG, the “go-to” Middle-Eastern venue for concerts, sports and other live entertainment, although it will face stiff competition from 117 Live’s 20,000-cap. open-air The Venue (since renamed the Autism Rocks Arena).

Lister says Dubai is located ideally to capitalise on acts flying out of, or to, Europe from venues in Asia and Australasia

“Dubai Arena joins AEG Ogden’s growing network in the Asia-Pacific region, which includes arenas in Sydney, Brisbane, Perth and Newcastle [all Australia] and three in China, convention centres with entertainment theatre inclusions in Sydney, Brisbane, Cairns, Darwin, Kuala Lumpur and Oman, plus the 52,000-seat Suncorp Stadium in Brisbane, and will be a valued addition to AEG Facilities’ family of 130-plus iconic venues worldwide,” comments Lister.

“It will also strengthen AEG’s position in the Middle East, where stage one of the US$1.5 billion Oman Convention and Exhibition Centre opened last month and work is proceeding on stage two, which includes a 3,200-seat theatre,”

AEG rival-in-chief Live Nation also ramped up its activities in western Asia in September via a joint venture with Elan Group, which will operate two arenas in Qatar.