Weathering the storm: Call for fests to cooperate

After a summer of severe weather, several production bosses have called for increased transparency between festivals to ensure they're prepared for 2017 and beyond 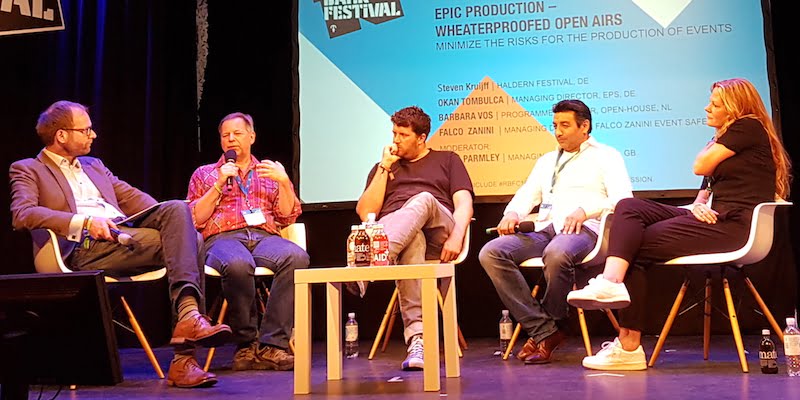 Following a turbulent international festival season in which several events – including FKP Scorpio’s Hurricane and Southside, Marek Lieberberg/CTS Eventim’s Rock am Ring and Founders’ Governors Ball, were called off due to severe weather – senior event production figures have spoken of the need for festival bosses to collaborate and share information to ensure they’re prepared in future.

Speaking on Reeperbahn Festival’s Epic Production: Weatherproofed Open-Airs panel, Barbara Vos of Dutch festival consultancy Open House called for promoters to adopt a uniform code of best practice, with larger events leading the way. In response to a question from panel moderator Greg Parmley (ILMC) asking if the festival industry should institute its own code of conduct – a Purple Guide for severe weather – Vos said: “Collaboration is really important. But the major festivals need to lead, and be open and discuss with smaller events which perhaps don’t have the money to pay for insurance.”

Okan Tombulca of event infrastructure specialist eps added: “For me it’s about bringing it to a level where it’s the same for all festivals. All need to be prepared better, and have a very clear plan what to do [in the event of potentially festival-cancelling bad weather]. Local authorities, health and safety, production – everyone should be involved.”

Falco Zanini Event Safety boss Falco Zanini agreed in principle but said it’s more difficult in Germany, “where you have a federal system where every region, every city governs itself. In theory we have clear federal laws but they’re handled differently in each region.”

He added that German electricity board VDN issued its own lightning protection guide in 2004, but “no one knows about it”.

Vos suggested that any move towards a uniform code would need to be led by governments or industry bodies, to force different festivals to collaborate and “pull together all the different people”.

“It’s human nature to talk about things endlessly, but then only act on it when something actually happens”

Tombulca said festivals could learn from US stadia, where there are “very clear guidelines from authorities” about what to do in case of lightning. “In the US this year we had to evacuate several stadium shows,” he explains. “It worked so well because everyone knew what to do.

“If there is lightning within ten miles – it doesn’t matter which way the storm is heading – you have to evacuate, and wait 30 minutes until you can bring people in again. There are big screens showing the weather and where to evacuate to.”

Panellists disagreed on whether severe weather is becoming more common due to climate change: Steven Kruijff, head of production at Germany’s Haldern Pop Festival, said the weather is “definitely getting worse: I’ve been working at the festival for 14 or 15 years, and we had ten years of really good weather” – Haldern Pop is held in the second week of August – “but now it’s getting wetter and stormier; not just rain, but storms, lightning and strong wind”. Tombulca countered that inclement weather has long been a risk associated with summer festivals, pointing to the infamous Glastonbury floods of 2005 (“tents were swimming around!”), but that “we’re paying more attention to it now”.

Ultimately, said Tombulca, it took the events of 2016 to convince promoters and festival teams to sit up and finally take notice of the need for proper preparation. “We’ve been talking about this since IPM [the ILMC Production Meeting] ten years ago. It’s human nature to talk about things endlessly, but then only act on it when something actually happens.

“Now people are thinking, ‘Something happened [Rock am Ring] and I have to change something.'”