Despite reports saying otherwise, a portion of the ashes of the late David Bowie were not scattered into the wind in the Nevada Desert over the Labor Day weekend 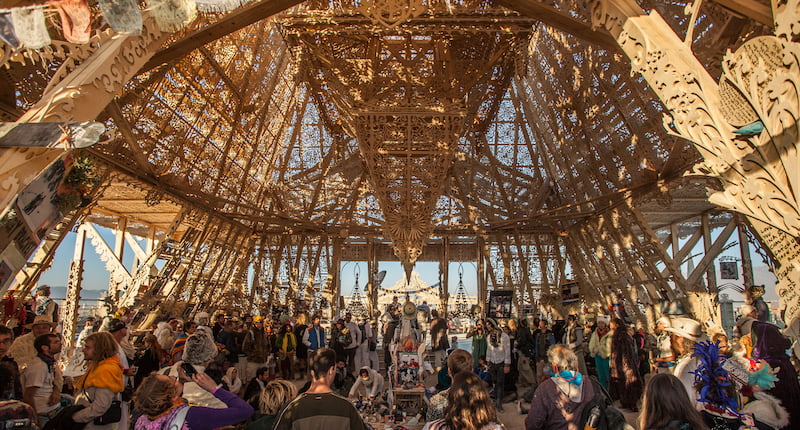 Inside the Burning Man temple, which is burnt down at the end of every festival, in 2012

Contrary to E!’s report, David Bowie’s ashes were not scattered at Burning Man, his son, Duncan Jones, has confirmed.

That Burning Man thing? What people will do & say for attention never ceases to amaze me. Not true. Kind of a gross claim as well. *sigh*

…We all know if dad DID want his ashes scattered in front of strangers, it would be at the Skegness Butlins. 😉 pic.twitter.com/0Oh1g9tGke

David Bowie’s ashes were reportedly scattered at Burning Man – a festival the late singer “loved” – earlier this month with the permission of his widow, Iman.

According to an “insider” quoted by E! News, Iman gave a portion of Bowie’s ashes to one of his godchildren to scatter at a ceremony at the long-running countercultural gathering in the Nevada desert, which this year ran from 28 August to 5 September.

“David’s godchild and David had long talks about Burning Man and what it stands for,” the source said, “and David loved the message behind it.”

“David’s godchild and David had long talks about Burning Man and what it stands for, and David loved the message behind it”

An eyewitness told E! News the 70-person ceremony involved playing Bowie’s music “the entire drive from our camp to the Temple and back” and that “most of us had the Bowie [lightning bolt] face paint on in his honour”.

Burning Man hit headlines last week after its luxury White Ocean camp was attacked by “hooligans”, with raiders stealing and cutting power lines in protest at what they see as a betrayal of the festival’s ethos by those – largely Silicon Valley tech entrepreneurs – staying there.