The march, to protest the closure of Dalston venue Passing Clouds, will accompany a moment of silence from 30 clubs across the UK capital 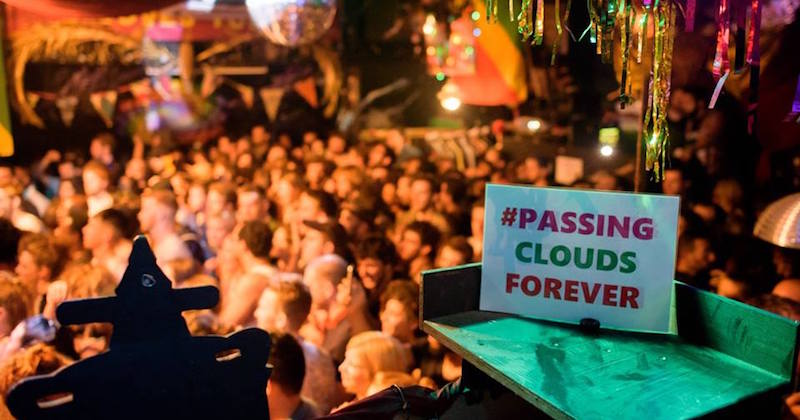 Representatives from seven under-threat or recently closed London venues – Passing Clouds, the 100 Club, the Silver Bullet, Shapes, the Passage, 12 Bar and Fabric – will take to the streets tomorrow in a “vibrant carnival-style procession” to protest against the closure of Passing Clouds.

Over 30 venues across the capital will also fall silent at midnight in support of the venue.

The campaign to save Passing Clouds, a 300-capacity music/arts venue and communtity centre in Dalston, has won the support of Paloma Faith, Frank Turner, DJ Gilles Peterson, producer Trevor Horn and the mayor of London, Sadiq Khan, who has said “we don’t want venues like Passing Clouds closing”.

Outlining the background to the march, a Passing Clouds spokeswomen explains: “On 22 August, after ten vibrant years serving the community, Passing Clouds was evicted without warning by Landhold Developments after months of battles to secure a new lease.

“Last month, Landhold Developments offered a 345% rent increase but then evicted us just days later before giving us proper time to respond. Now our building on Richmond Road resembles a maximum security prison with security guards and dogs on 24-hour patrol.”

She says Passing Clouds is “a unique platform for musicians and artist from over 100 countries” and “one of London’s and the UK’s best examples of unity and harmony via multicultural interaction.”

Protesters will march from Hoxton square to Passing Clouds to deliver an open letter to Landhold Developments, Hackney Council, Khan and City Hall.

“What started as a march to save our building has become so much more in the wake of Fabric’s closure,” says the venue’s events manager, Gudrun Getz. “This is about drawing attention to what is happening to music venues and clubs all over London. We’re dropping like flies and enough is enough. We need proper measures in place to protect our creative spaces and cultural heritage, and we need these measures implemented as a matter of urgency. If we don’t act now, there will be nowhere left to go out in London.”

Getz has called on Hackney Council to follow Wandsworth’s lead in protecting the borough’s small clubs and pubs.