There are calls for an inquiry into why the Broadwick Live event was able to use the floodplain of the River Glaslyn, which burst its banks, as a car park 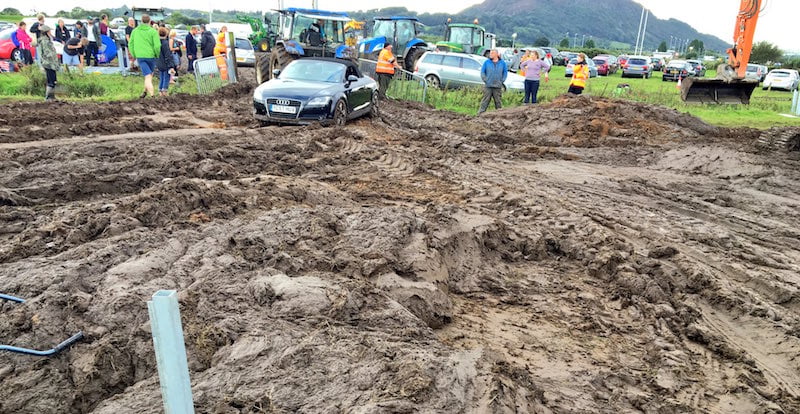 Around 150 cars were reportedly still stranded at Festival №6 this morning after becoming stuck following widespread flooding at the Welsh festival.

The BBC reported earlier today that many of the remaining vehicles were abandoned by their owners and are expected to be collected later in the week.

Gynedd councillor Jason Humphreys has called for an inquiry into why the festival’s park-and-ride car park was allowed to be situated on a known floodplain. “Forecasters gave ample warning of torrential rain on Saturday,” he tells the BBC. “But once again flood management agencies failed in their duty as they seem to be completely unaware of the dangers to people and property.”

Natural Resources Wales (NRW) counters that festival promoter Broadwick Live was made aware of flood warnings and took the final decision to use the Porthmadog site for the car park.

“We invested heavily in extra infrastructure at the site, but ultimately the extreme weather was beyond our control”

A spokesman for Broadwick Live tells IQ: “We have used the park-and-ride site at Porthmadog Rugby Club effectively and without incident for the last four years and did so again this year with the guidance and support of the authorities and Safety Advisory Group.

“We were aware that the site had flooded previously, however we were advised by the landowners and knew from experience that the land drained well. At the time the decision was made there were no advance flood warnings and no intervention from other agencies. We contacted Natural Resources Wales and arranged preventative measures, as well as investing heavily in extra infrastructure at the site, but ultimately the extreme weather was beyond our control.

“At no point over the past five years have we been advised not to use Porthmadog Rugby Club for the festival park-and-ride operation. We strive to deliver the best customer experience for all our guests and are genuinely saddened by the outcome of this weekend.”