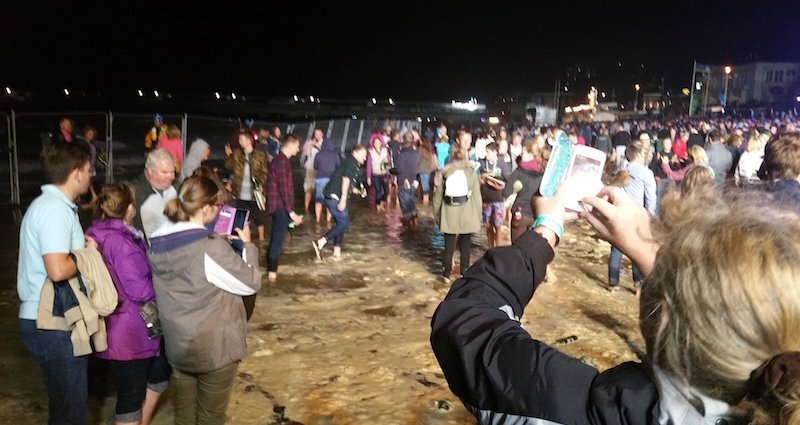 A flooded beach at Night Air on Saturday

The second day of a beachfront music festival in the UK came to an early end after high tides flooded the arena.

Radio station and festival organiser Wave 105 called off Kaiser Chiefs’ headline show at Night Air at the Piers in Bournemouth on Saturday night (19 August) after “exceptional wind and sea conditions” led to seawater encroaching on the crowd area, as seen in Anthony Carrier’s audience video below, and damaging the stage.

A statement from Wave 105 said the decision to cancel “was taken in the interest of public safety, and the organisers are grateful for the corporation and understanding of all involved”.

“Unfortunately a combination of exceptional wind and sea conditions that could not be fully anticipated have resulted in the cancellation of tonight’s final part of the show,” the station said on Saturday. “This was caused by direct southerly/south-westerly winds and short period strong waves which added to the forecast high spring tide. This created high levels of water on the beach that had been unprecedented in all the years of staging the event.”

In a video message, Kaiser Chiefs lead singer Ricky Wilson apologised for the cancellation but said “the stage was in danger, and they [organisers] didn’t want it falling on you or for us to be on it when it fell”.